How Big is the Big Ten Financially? 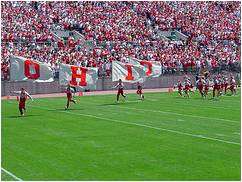 I recently wrote about finances in the SEC, specifically with respect to football and overall athletic department profits. Thanks to so many of you who sent me tweets and emails about it, I’ve decided to make this into a series. Next up is the Big Ten. (If you missed the first piece and want to understand the origin of these numbers and how they were calculated, check the note at the end of this piece.)

There’s an argument to be made that the SEC is the strongest conference in college football. I’m not just saying that because I’m an SEC fan, I’m saying it because they’ve won the past five national championships. Perhaps then it is no surprise that the SEC surpasses the Big Ten in each and every category when it comes to football finance: it generates more, it spends more and it posts bigger profits.

Here’s a quick breakdown of the averages for each category (the totals would be misleading because the SEC has twelve teams and the Big Ten only eleven):

Enough of the comparisons between conferences (I think that’s all been settled on the field anyhow), let’s take a look at how the schools within the Big Ten stack up against one another.  In terms of revenue, I think it’s no surprise that Penn State, Ohio State and Michigan top the list:

Penn State is about $1.6 million short of matching the University of Alabama, who topped the SEC list in terms of football revenue.  In fact, the second-highest revenue-generating team in the SEC, Georgia, out paces Penn State by about $600,000. Remember, however, that Penn State’s stadium seats about 107,282, according to an NCAA attendance report, while Alabama’s seats 101,821 and Georgia’s seats just 92,746. Let’s take a look at where Michigan, Ohio State, Penn State rank versus Alabama and Georgia in terms of average attendance for the 2009 season (the same season as the financial data):

Michigan, Ohio State and Penn State eclipsed Alabama and Georgia in home game attendance for the season by hundreds of thousands of fans. Michigan and Penn State each had eight home games, Ohio State and Alabama each had seven and Georgia had just six. It should also be noted that Georgia plays a neutral field game with University of Florida that brings in about $1.7 million for the school each year, compared to $2.8 million they average for an SEC home-and-away series.

The bottom line is that SEC teams who are playing fewer homes games in smaller stadiums and averaging fewer fans per game are still out-earning the Big Ten’s top teams.  Where that higher revenue comes from is unclear, as it could be anything from more expensive luxury boxes to higher alumni donations or more institutional support.

One difference-maker could be the way broadcasting money is allocated by the schools when they prepare their financial statements for the Department of Education.  According to several Big Ten schools I spoke with, money from the Big Ten Network, which carries multiple sports, is not allocated by sport, but is instead included in “other” non-sport specific revenue.  Not every school from the Big Ten and SEC was willing to comment on how they allocate their broadcast revenue, so all we know is that the way broadcasting revenue is allocated varies by school. (See at the end for a more detailed explanation of the variances possible with this data.)

There’s a difference in expenses when you compare the Big Ten to the SEC as well.  First, here’s a look at the money being spent by Big Ten programs on football.

With both revenues and expenses being larger on average in the SEC, who turns a bigger profit in football?  Here are the Big Ten figures:

Here are some observations about Big Ten schools minus the SEC comparisons:

It’s also important to note that this data is from July 1, 2009 to June 30, 2010, so we’re talking about the 2009 football season.  Additionally, while these are the most complete numbers available for all Big Ten schools (a public records request wouldn’t get you financial information for the private schools), there is room for variance.