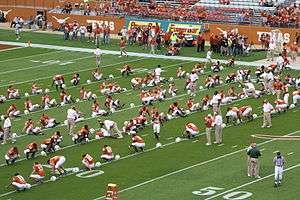 After writing about the football finances of the SEC, Big Ten, ACC, and Pac-10, it’s the Big 12’s turn.  The numbers are drawn from schools’ reports to the U.S. Department of Education on the state of their athletic departments’ finances for July 1, 2009 to June 30, 2010. See the note at the end for more details on the data.

Texas, of course, is in a league of its own when it comes to football revenue. In fact, they lead the nation. They’re a whopping $21 million ahead of the highest revenue-generating school we’ve covered thus far, Alabama:

For those keeping score between conferences, here’s where the Big 12 falls:

The top teams in the Big 12 lift the whole conference in a way I haven’t seen in the other conferences I’ve covered. Take a look at the mid-point in each conference to see what I mean:

When you use the mid-point instead of the average, the Big 12 plummets down the list. There are a number of reasons. First, the bottom-dweller in terms of revenue is no surprise, it’s Baylor University at $14.4 million. Only four schools in the SEC, Big Ten, Pac-10 and ACC combined bring in less than Baylor: Vanderbilt, Maryland, Wake Forest and Washington State.

Another factor is that the Big 12 has four teams bringing in less than $20 million in football revenue. Meanwhile, the SEC, Big Ten, Pac-10 and ACC combined have eleven, with six of those coming from the ACC, who is tied with the Big 12 in terms of the mid-point.

On the other end of the spectrum, the Big 12 has only two teams bringing in more than $50 million in football revenue. The SEC and Big Ten combined have ten teams who exceed this mark. However, neither the Pac-10 nor the ACC have a team who approaches this level of revenue.

What about expenses? In the SEC we saw that Georgia who ranked second in football revenue only put 26% of their football revenue back into football. Meanwhile, Alabama and Auburn, who would go on to win the next two National Championships, put 43% and 42% back into their program, respectively.

Curious how that stacks up against the other conferences?

The Big 12’s biggest spender, Texas, is lagging behind the top spenders in the SEC and Big Ten. Ohio State spent $32 million, while Alabama spent $31 million. Texas spent $25 million, which put it behind even the second and third highest spenders in the SEC, Auburn and LSU.  It’s worth noting that the three top SEC spenders have won three of the last four national championships. The top spender in the Big Ten? They’ve been in two of the last five national championship games.

Texas, the team throwing around the most cash in the Big 12, is spending 27% of what it makes on football, which makes it more like Georgia, although they still outspend Georgia by about $7 million. When you’re making that much, perhaps there’s no need to spend a greater percentage. Oklahoma, on the other hand, is putting 35% back in and Nebraska is re-investing 36 percent. When you get down to a school like Baylor who is only making $14 million, they’re having to put 87% back into the program, which means less money to fund other sports.

Baylor does manage to stay out of last place when it comes to football profit, just as it did with expenses:

Kansas was the big surprise for me in terms of expenditures for football, and it’s why they end up at the bottom of the profit pile. Although they ranked tenth in football revenue, they were fifth in expenses.

The other interesting thing to note when looking at the football numbers for the Big 12 is that numbers one through four remain the same in both revenue and expenses, something that hasn’t happened in any other conference I’ve reviewed.

Based on the football financials, and general knowledge, it should come as no surprise that Baylor shows no profit in the athletic department. In fact, I would imagine they operate a deficit they fund with other monies in order to show a break-even status. As we’ve seen with other conferences, schools are reluctant to show a deficit and instead show that they break-even after pulling from their athletic foundation, booster club or other source. I called Baylor for comment on their particular situation and they declined to disclose the information.

Wondering how Kansas ends up second in athletic department profit after nearly depleting their football revenue with football expenses? Basketball, of course. During this same time period, Kansas ranked #11 amongst all BCS schools in basketball revenue. Texas followed closely behind in twelfth position.

Compared to the other conferences, the Big 12 has done fairly well in terms of average athletic department profit:

Expect to see the Big 12 improve their numbers as well.  According to the Sports Business Journal, the Big 12 is nearing terms on a new television contract that would provide $60 million annually to the conference, which is triple what it receives now. In addition, all of the teams except Texas and Oklahoma are working on a Big 12 Network, which would provide additional income to the schools.

However, remember that while the conference increases its position relative to other conferences, schools like Texas and Oklahoma who remain in the conference will also widen the gap between themselves and the other schools in their own conference. The Big 12 has made it clear they will retain their current method of television revenue distribution, which involves half of all monies being evenly divided and the other half being distributed based upon appearances (meaning Texas and Oklahoma continue to get richer).

It’s also important to note that this data is from July 1, 2009 to June 30, 2010, so we’re talking about the 2009 football season.  Additionally, while these are the most complete numbers available for all Big 12 schools (a public records request wouldn’t get you financial information for the private schools), there is room for variance.

Did Texas Tattle on Oregon for Suspicious Recruiting?
Money Not As Big in Big East Football