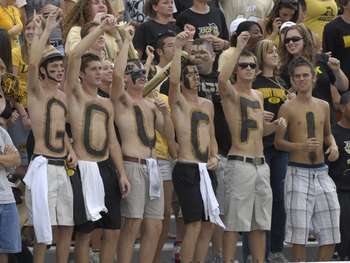 Only six on the list come from AQ conferences and all are either from the ACC or Big East. It’s also interesting to note that five Florida schools and four Ohio schools are in the top 25, which I’ll discuss more below.

Perhaps more interesting than the dollar amount, which is certainly influenced by size of enrollment and amount of student activity fees charged per student, is which schools top the list in terms of the percent of total athletic department revenue being generated by student fees:

Seven schools get at least half their budget from student fees, with students at Florida International providing more than 70% of the total revenue for the athletic department! If you expand the pool to schools receiving at least a third of their athletic department revenue from student fees, you’re up to sixteen schools. This time only one AQ school makes it onto the list: South Florida. While there’s certainly a trend in the non-AQ conferences for requiring student fees to fund athletics, there’s a definite pattern in Florida and Ohio.

I spoke with Brad Stricklin of University of Central Florida and asked why Florida schools might need to be more reliant on student fees than schools from other states. He pointed out that in Florida state funds can only be used for Title IX purposes. With regards to UCF’s appearance on both lists, Mr. Stricklin pointed out that UCF’s student fees are the fourth lowest per student in the state. He also explained how students are involved with the decision-making process on student fees. A committee of eleven members, six of which are students, decide how to allocate fees each October. Fees fall into three categories: health, athletics and student activities. The athletic department presents their needs to the committee, who then makes a recommendation that goes on to the Board of Trustees.

With UCF being such a young school, I would imagine student fees will be relied on less heavily in the future as their alumni base continues to grow.

The bottom line is that the money to run the athletic department has to come from somewhere. Where do you think it should come from? How much of non-AQ’s reliance on student fees is a product of smaller conference distributions? Is there a direct correlation between football revenue and the need for student fees? We saw with the AQs that there certainly seemed to be a correlation.

I’ll post the numbers for each non-AQ school later today.

How Profitable is Football in Conference USA?
Student Fees for Non-AQ Schools