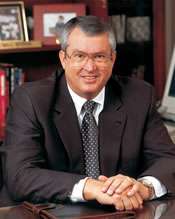 Texas A&M Athletic Director Bill Byrne chatted with me by telephone yesterday. We talked about everything from the Longhorn Network to rumors of a move to the SEC to Kyle Field renovations. Below you’ll find the full interview followed by my thoughts on the most important thing he said.

Q: What are some things A&M can do to compete with Longhorn Network?

A: I’m not concerned about competing with the Longhorn Network. What I am concerned about is fairness. As Athletic Directors [in the Big 12] we agreed that every school could take one football game and choose to put it on PPV or our own network. As far as the high school games, I think that is absolutely against NCAA rules. I think that’s a recruiting advantage. Fairness is what you want you in recruiting.

Q: What about the fact that University of Texas administers high school sports in Texas? Is that an issue?

A: I think that’s a significant issue.

Q: I’m of the opinion that Texas will become an independent in the next five years. What do you think?

A: They have a very good conference. They get special treatment from ESPN, and they have a place for all of their Olympic sports. I don’t agree that they will become independent.

Q: Tim Brando and I discussed on his show the other day the increasing volume of Texas A&M fans who want to move to the SEC. Tim says he’s hearing from a lot of fans who are ready to make the move. Do you feel like fans are becoming more vocal about wanting to move to the SEC?

A: I don’t know the answer to that, because I don’t know who all is talking to him. There was a movement last year by a number of people on the internet that wanted us to leave Big 12 and go to the SEC. Texas A&M didn’t push Humpty Dumpty off the wall, but we did help put the pieces back together again in the Big 12. There’s some angst here about our future, so I’m concerned about that.

Q: At SEC Media Days Commissioner Mike Slive proposed an increase in GPA required for the core high school curriculum required by the NCAA. Several coaches opposed saying they’d rather increase the standards at the college level instead of putting pressure on high schools or denying kids opportunities. What do you think?

A: I’ve been an AD now almost thirty years and I find where the problems arise are on the front end and whether or not they can compete academically on campus. If prospective-student athletes don’t have at least a 1300 SAT or are in the top 10% of their class, they’re not getting into Texas A&M. We’re an elite academic institution like Vanderbilt or Florida in the SEC and our core curriculum requirements are higher than those required by the NCAA.

Q: You’ve been compared to Louisville AD Tom Jurich because of your commitment to Title IX and Olympic sports and success at marketing/fundraising. Do you agree?

A: Oh yeah. Tom has done an incredible job everywhere he has been. He’s done a remarkable job at Louisville.

Q: Why focus on non-profit-producing sports? What benefits do they bring to the University?

Once someone puts on a Texas A&M uniform, they are your athletes. They are your kids. I treat our athletes as though we’re part of a big family. When I was at Oregon I was introduced at a woman’s volleyball banquet. They talked about how I attended all their games, banquets and other events. When they introduced me they talked about me being like a father to the program. I feel a personal responsibility to those students and their parents.

Q: Obviously Title IX is the reason some sports are on campus….

A: I was very disappointed when Title IX was passed and not funded. It was an unfunded mandate, and I objected to that aspect. I don’t believe in unfunded mandates. Once it was passed, I stand up and salute it. We are going to do the very best we can for all of our athletes. We treat all of our athletes the same. We want to make sure you have a great experience while at Texas A&M and leave with a degree.

Our women’s basketball team won the national championship this year. Their budget is identical to the men’s except the guarantees are less.

Q: Are there any plans to renovate/expand Kyle Field or any other facilities in the near future?

We’re spending 25 million right now to renovate the baseball field. We’ve recently had seven coach’s nights across Texas where renovation plans for Kyle Field have been presented. We’re also getting a new outdoor track. We have the best indoor track facilities in the world – not the country, the world. That’s why we host the NCAA championship every third year. The new outdoor track will be the best in the country and will host Olympic trials. The Regents passed football plans for Kyle Field last week. We’ll start on the one side at the end of the 2012 season and tear it down section by section. We’ll tear down the west side at end of the 2013 season and the second deck following the 2014 season.

Q: Will there be additional seating added during the renovation to Kyle Field?

A: We will not increase size of football stadium. It seats 90,000 now. There’s a good reason for not having an increase – in the sport of football there is declining attendance both in college and NFL and increase in television viewership. We don’t want to overbuild.

Q: I’ve written a lot about colleges selling naming rights on their facilities. How do you feel about naming rights?

The new baseball stadium will have “Blue Bell Park” in the name, if that answers your question. They’re paying 7-8 million to have the naming rights for 20 years.

Q: Texas A&M is one of 22 self-sustaining athletic departments. To what do you attribute that?

A: I tell all of our coaches they need to hug the bricks at Kyle Field every day. When you have a stadium that seats 90,000 and is sold out it generates a lot of help. Also, our membership in Big 12 and terrific sponsorship program. We manage our money well.

The thing that stood out to me most about this interview is what Byrne said about overbuilding. Texas A&M has made the conscious decision not to add any seating to their football stadium despite their attendance levels. Texas A&M was #13 in average attendance in 2010 according to the NCAA.

This to me underscores the importance of television contracts in college football. I’ve long said more ADs and commissioners should be former CEOs and CFOs because college football is a billion dollar business. Now I’m wondering if the focus shouldn’t be on someone who has worked in or who has connections with the television industry.

No commissioner has been more lauded lately than the Pac-12’s Larry Scott. Why? Because he secured a record-breaking television deal for his conference that involved ESPN and FOX having to work together. Yesterday, he announced details of the Pac-12 Network, which will feature a national network and six regional networks within the conference’s footprint. In my opinion this blows the Big Ten Network out of the water in terms of structure and availability. (That being said, I don’t think he has the same product as the Big Ten, so we’ll see how it goes.)

Television is not only a huge source of revenue for conferences, it impacts the entire structure of college football. For some like Notre Dame and BYU it helps support independence. For others, like members of the Big 12, it can hold a conference together. It’s the reason why TCU and Utah are moving to AQ conferences and Boise State is not.

The stadium capacity arms race in college football is over. Sure, stadiums will still be renovated and improved, but the race to see who can add the most seats has likely peaked. Instead, we are in the midst of a great television race. Which conference can sign the largest contract? Which conferences can support their own network? Which schools can use their own network to get ahead? Which school can a conference add to get into a top tv market they don’t already occupy?

It’s time to face the facts. The future of college football is in the hands of television networks.