Texas’ Contract with ESPN for the Longhorn Network 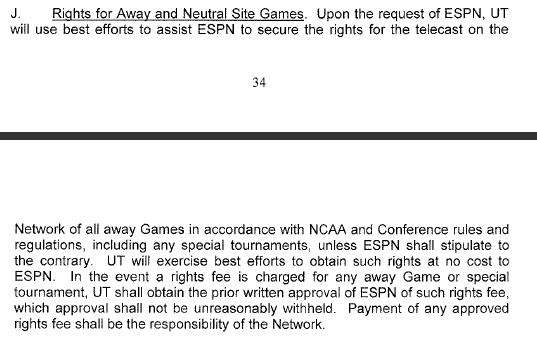 Now that the contract between University of Texas and ESPN for the Longhorn Network is public, conspiracy theories abound everywhere outside Austin. So, I’ve decided to put on my lawyer hat and dispel some of the myths.

I rarely call out others specifically, but one blog on this topic raised a number of issues I think aren’t issues at all. I use this person’s comments as an example, because I think it’s representative of what many who oppose the Longhorn Network think. Although I applaud the person who wrote the blog over on The Midnight Yell for putting forth the effort to obtain a copy of the contract, I think he let his mind run away with him.

The first issue he raises is over the number of football games ESPN will show:

So where does the network and ESPN stop at?  Four live Texas Longhorn football games?  The entire home schedule?  And if the network does in fact air that many live football games, how does this affect the overall value of the 1st and 2nd tier media rights of the conference as a whole?  Less money for the entire conference on the table when 1st tier rights become available in 2015-2016?

Okay, let’s remember how this works. The Big 12 already has first (ESPN) and second (FOX) tier rights holders. ESPN/ABC has rights to 19 games and no one team can appear more than 6 times. They’re the first-tier rights holder, so they choose first. Unless ESPN can make a deal with FOX, who gets second pick each week as the second-tier rights holder, ESPN is going to choose the biggest game of the week to show via its first-tier contract, even if it includes Texas. Without some sort of arrangement whereby FOX agrees to pass the game up and let it fall to the Longhorn Network, ESPN isn’t going to risk not choosing a Texas game and allowing FOX to snap it up. And why would FOX agree to pass on a big Texas game? FOX is paying $1.17 billion over thirteen years for second-tier rights.

All those who have been following this as it unfolds know that FOX did agree to a limited waiver which would allow ESPN to air a second Texas football game in 2011. However, don’t think they gave ESPN something for nothing. The agreement between the networks hasn’t been made public, but FOX isn’t some second-rate operation. I assure you they got something in return. Sports Business Daily’s John Ourand explained it like this:

Fox, which holds the Big 12’s cable rights, granted LHN a limited waiver to allow ESPN to shift the games from ABC to Longhorn Network this season. A source said Fox agreed to the change when ESPN offered certain selection considerations for college football games, including the possibility of relaxing its broadcast exclusivity and allowing Fox to televise Big 12 football games on its broadcast channel starting in ’12.

Back to the unfounded fear that the Longhorn Network would end up with four live games or “the entire home schedule.” Texas has contracted away its third tier rights (i.e., games that aren’t chosen by ESPN as the first-tier rights holder or FOX as the second-tier rights holder). Yes, there’s some room for negotiation between ESPN and FOX, but FOX isn’t going to just give away all its rights to Texas games when it’s paying $1.17 billion for second-tier rights. Does it mean ESPN will pay less for the Big 12’s first-tier rights when the current contract with the conference is up? Of course not. The last thing ESPN wants is for FOX or NBC/Comcast or anyone else to come in and control first-tier rights in the conference.

Many are also concerned because the language of the contract state that it is the “mutual desire that the Network telecast no less than two (2) such regular season games per college football season.” ESPN wants two games a season on the Longhorn Network. Why is that shocking to anyone? Not to mention, every game that falls to the Longhorn Network makes room on ESPN and FOX to broadcast another Big 12 team pursuant to their rights as first- and second-tier rights holders. The “mutual desire” language is common in contracts. It simply means Texas is acknowledging it will do what is within its power to make this happen. It is not a covenant irrespective of conference rules, regulations or agreements. As we all now know, plans to air a second game have been put on hold per an agreement between conference members, and in order for a second game to air both institutions and the conference office would have to agree.

The writer over on The Midnight Yell also pointed out the portion of the contract that calls for Texas to assist in getting away games on Longhorn Network:

If that isn’t unsettling, ESPN and the University of Texas is also in an agreement to get live sporting events when the Longhorns play AWAY from home and say in Norman or Stillwater.

This just says Texas will assist in whatever way they can in helping the network get access to away games – in accordance with NCAA and Conference rules. Basically, ESPN wants assurances that Texas will assist in getting the rights for these games, if possible. Does it mean ESPN will get the rights? No. Texas is just agreeing to do what they can to help. Standard contract language. ESPN is building $13 million studios and paying out over $10.98 million to Texas and $4.02 million to IMG. Of course they’re going to want Texas’ full cooperation in getting them as much desirable programming as possible. It doesn’t mean they can circumvent other tv rights deals or conference rules.

Another provision which is misrepresented on The Midnight Yell is one regarding “Videotape Services”:

Something else that should alarm everyone is that the University of Texas can simply submit a “request” to ESPN to produce any kind of video.  Texas will pay the bill, but ESPN will produce.  Maybe the Longhorns need propaganda against another Big XII conference member.  Ask ESPN to make it.  Worries surrounding the Longhorns the week before the Red River Shootout?  Ask ESPN to make a short clip showing everything is just fine behind “closed doors”.

And these video tapes I just mentioned?  HAVE to be to the “benefit of UT” Why must they benefit the Longhorns?  The contract says they must.

You can’t discuss this provision without looking at the definition of “Videotape Services” in the contract. Here’s what UT can ask for:

ESPN isn’t going to be creating some sort of expose on Oklahoma the week before the Red River Rivalry. And the videotapes produced are for the “benefit” of Texas, because they become the copyrighted property of Texas. This use of the word “benefit” does not mean the material has to make Texas look good, it’s legal terminology to indicate it will become property of Texas.

Other provisions of the contract that have been attacked:

Right of First Refusal: Built into the contract is a right of first refusal in favor of ESPN to all television rights currently held by the conference if Texas becomes an independent. Any lawyer worth his salt would put this into the contract. ESPN is investing tens of millions of dollars into building studios and starting up the Longhorn Network. Why would they let Texas walk away from the Big 12 and sell its first- and second-tier media rights to FOX or NBC/Comcast or CBS?

Exclusion from Conference Network: The contract essentially excludes Texas from any Big 12 Network that might be created. Personally, I don’t see that network ever coming to fruition. Regardless, any ill will over this should be directed at the conference, not at Texas or ESPN. The conference could have prevented teams from forming their own network. It’s one of the reasons floated around for why Texas didn’t go to the Pac-12. Why didn’t the Big 12 prevent the Longhorn Network? Because Texas would have left.

Power to Replace On-Air Talent: Many of you know that Texas has the power to demand on-air talent be replaced if they do not “reflect the quality and reputation desired by UT.” Well, duh! Why would Texas allow someone to speak negatively about them on their own network? I don’t think they’ll be replacing an announcer who criticizes a running back having a bad day, but of course they want the power to demand replacement of someone who is routinely painting them in a bad light. If I badmouth one of my firm’s clients on here, don’t you think there would be repercussions?

High School Championships: A much debated aspect of the contract is the provisions which states Texas and IMG will use best efforts to get the UIL (the Texas high school sports league – run by UT) championship games on the Longhorn Network when the current television contract for those rights is complete. In my opinion, this is an NCAA issue. The language was obviously put in the contract under the belief it was allowed under the NCAA regulations. UT runs the UIL, so I don’t find it surprising that ESPN asked to make this a part of the contract. It’s up to the NCAA now.

The bottom line is that Texas has every right to contract away its third tier rights. As does Texas A&M, Texas Tech and all the other members of the conference. If you’re a school that doesn’t like the advantage Texas has by having its own network? Go get your own. Wait, that’s right…not everyone can do it. Not everyone can become a lawyer either. Should we just hand bar licenses out to everyone to make things fair and equal? This is what I call an “uncomfortable truth” in college football. Watch out for more of them in my upcoming book, Saturday Millionaires: why college athletes will never be paid and other uncomfortable truths about the business of college football.

College Sports At A Glance
Texas A&M to the SEC?