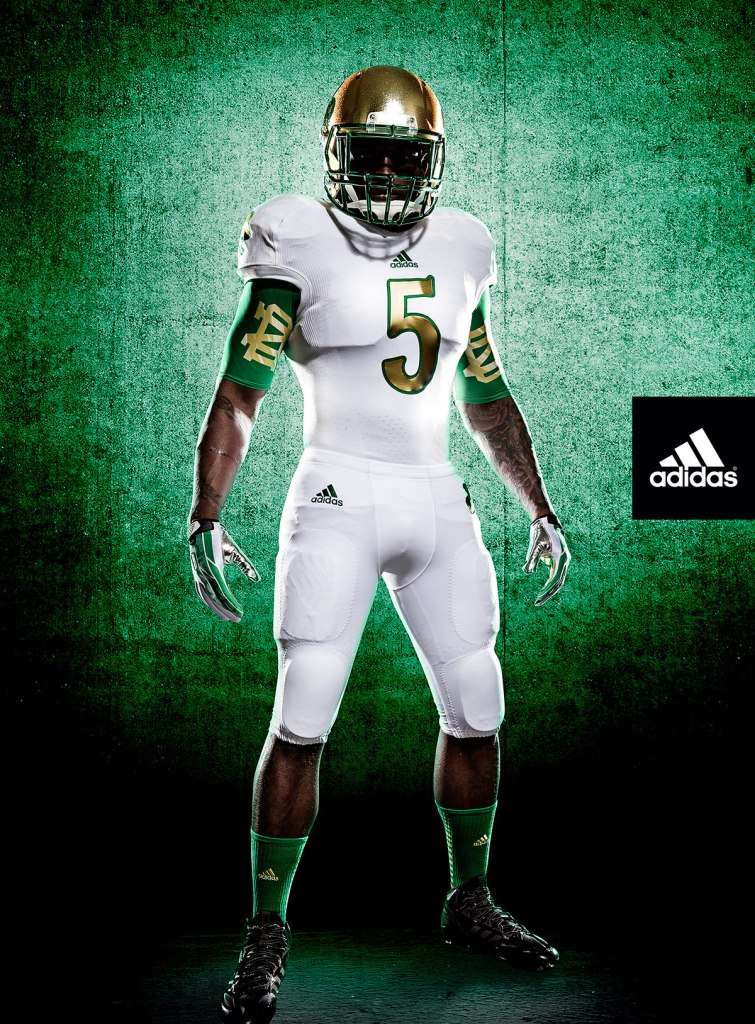 The trend of outfitting teams in new jerseys, helmets, shoes and even gloves seems to grow with each passing year. Some teams, like Oregon, seemingly wear a new uniform every week. Louisville added a new uniform just for home games this year. West Virginia has three different helmets to rotate with its three different jersey colors. Schools do this to excite the team, and maybe to sell a few new jerseys, but mostly they do it to attract recruits. It turns out teenagers love flashy new apparel. If you’re an adult reading this, I promise that whatever uniform you thought was most hideous was wildly popular with teenagers. Just ask one.

For that reason, every school has considered uniform changes – heck, even Notre Dame got a new uniform this year for the Shamrock Series game. Some, like Penn State, have done minor things like adding player’s names to their iconic jerseys, while others have gone all out with multiple helmets, color combos and even complimentary gloves with logos or other designs.

As you can imagine, some schools have more to spend than others. It’s not all about the cash in their bank account though.

Under apparel contracts athletic departments have with companies like Nike, Adidas and Under Armour, schools receive what’s called a “product allowance” (i.e., free gear). However, that amount varies from school to school. Apparel contracts I have on file show most major college football programs getting over $1 million in gear. Here’s a small sample of what programs are getting for 2013-2014:

Most apparel contracts I’ve reviewed allow a program to purchase additional jerseys and other gear above and beyond their product allotment at wholesale price. Each contract is different, but quite a few of the Nike contracts I’ve read include a 2-for-1 offer on football shoes if the school orders more than a specified number (usually around 350). When you see a team wearing new uniform pieces, they’ve either ordered through their product allotment or purchased additional gear at wholesale price.

Trends at the FBS level have trickled down to FCS, where programs like University of Montana are finding ways to keep up with much smaller budgets.

Although he declined to discuss the exact amount of product allotment in the program’s Nike contract, Montana athletic director Kent Haslam said, “I think it is safe to say our contract is not at all along the lines of the larger universities.”

Nonetheless, Montana’s equipment manager, Robert Stack, has found a way to shake things up. This year, the Griz have two home jerseys and one away jersey they can match up with five different colored pants. Montana saves on costs by only purchasing new uniforms once every three years. The white, black and light gray/black pants pictured below are all from previous uniforms and used now to make different color combinations.

How many different helmets do you count above?

Sort of. There are five different combinations above, but just two base helmets were used: a flat maroon and a “Montana granite.” Stack does more with less by swapping out four different colored facemasks.  The facemasks cost anywhere from $28-46, according to Stack, but the Griz get more life out of them by rotating them. Two of those facemasks are leftover from previous games that used retro uniforms.

In addition to swapping out the facemasks, helmets get a new look each week with stickers, which cost just $1.50-2.00 each.

Montana spent just $242,000 last year on uniforms and equipment for all of its sports teams (everything from jerseys to golf balls). It’s a far cry from the average $1.6 million spent by public FBS schools last year, but barely short of the $263,000 spent by Louisiana-Monroe, the least spent by a public FBS school.

Despite it’s comparatively small budget, Montana has been able to take the field with a different look every single week this season. Now that’s doing more with less.