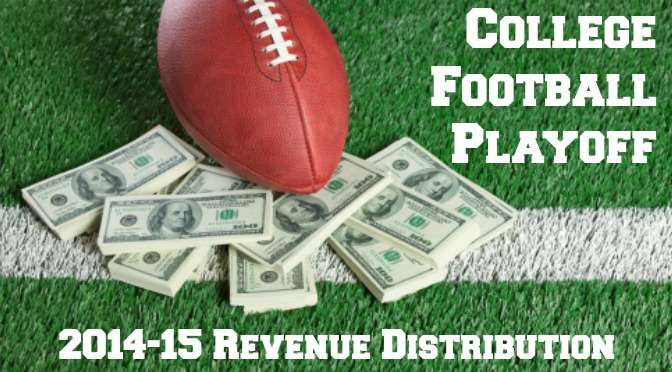 UPDATE: Conference-by-conference payouts based on bowl placements that were announced 12/7/14: click here.

Initial estimates for College Football Playoff payouts are posted on the CFPs website. Here’s a breakdown:

Curious how this compares to the BCS?

Here’s how the BCS payouts broke down last year:

By my math, the only conference who will see their revenue decrease will be the American as they move from the AQ/Power Five conference group to the Group of Five. Everyone else will see their fortunes significantly rise.

The figures above do not include revenue from the so-called “contract bowls.” The Big Ten and Pac-12 have a contract with the Rose Bowl for years in which the Rose Bowl is not hosting a semifinal which will provide $80 million for those two conferences to split annually. The SEC and Big XII have a similar contract with the Sugar Bowl for the same amount. However, since both the Rose Bowl and Sugar Bowl are semifinal sites this year, those conferences will not play in those games and receive that revenue this year.

The ACC has a contract with the Orange Bowl for $27.5 million annually, which it will receive this year in addition to revenue earned from the CFP as detailed above. Its opponent each year will be Notre Dame or a team from the SEC or Big Ten, and that team will receive a similar payout.