Kentucky Missing Out On Big Revenue 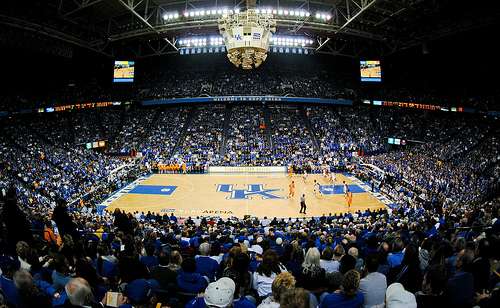 Someone recently contacted me and said they read University of Kentucky’s football program makes more than its basketball program. They found this hard to believe given the success of the two programs comparatively.

Now you might be thinking that Louisville’s success is owed to its new arena. However, Louisville was the largest profit-producer in college basketball the season before the new arena. In Freedom Hall, Louisville basketball’s previous home, it made $1.6 million on suite rentals and $10.8 million in ticket-related contributions required to be eligible to rent those suites. In the new arena those numbers have sky-rocketed to $5.7 million in suite rentals and $17.2 million in ticket-related contributions.

What about Kentucky? How much are they making for suite rentals and ticket-related contributions required to be eligible to rent suites? Nothing. Zero. Zilch. Nada.

Rupp Arena doesn’t have a single suite for University of Kentucky to sell.

Kentucky’s not the only SEC school missing out on the opportunity to increase basketball revenue because they have no suites. Georgia, Florida, Alabama, Mississippi State, and Ole Miss also lack suites in their basketball arenas and coliseums.

Tennessee only recently added suites to Thompson-Boling Arena. According to the athletic department website, “Phase I [of the 2008 renovations to Thompson-Boling] also included new luxury suites and loge seating, which are a primary funding source for much of the renovations.” Each suite goes for $35,000-50,000 annually. Over at South Carolina suites bring in $42,000 each.

Reports this week indicated Kentucky’s Rupp Arena could be renovated if the convention center is relocated. If luxury boxes and other premium seating areas were added, it could mean tens of millions of dollars in additional revenue for Kentucky’s athletic department. It’s an opportunity they can’t afford to miss out on.

CORRECTION: Arkansas was inadvertently listed in the original piece as having no suites. Bud Walton Arena has 47 suites.