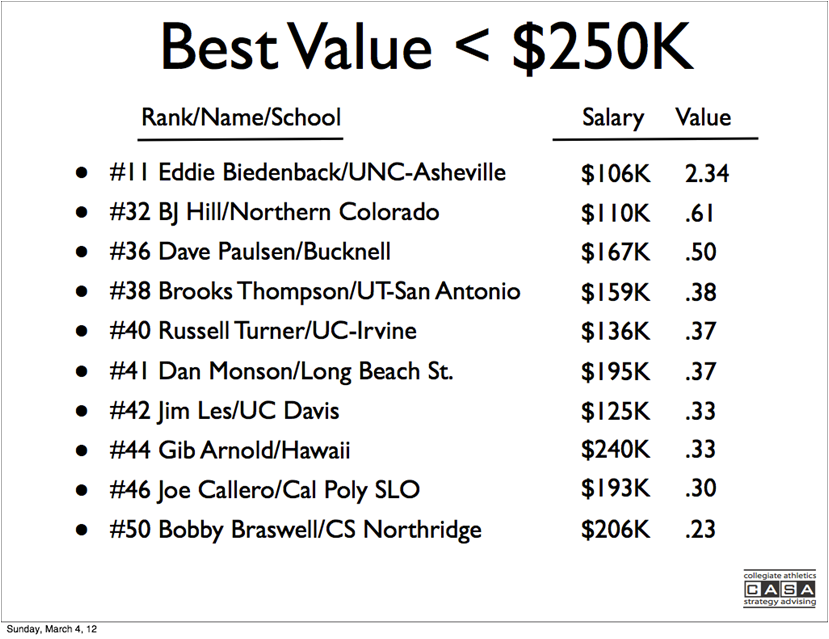 As we approach the most exciting and intense time of year for collegiate basketball, the amount of attention and financial stakes associated with March Madness should give collegiate athletic administrators an opportunity to reflect on the state of their programs.  Universities invest millions of dollars in basketball coaches and the dream of making it into the NCAA Tournament.  With 68 spots and 344 schools it seems as if there are many opportunities for schools to participate in the dance.

The financial challenges of maintaining basketball are not quite as frightening as football, given that teams carry a fifth of the players, have fewer coaches, and proportionately smaller scale needs for things like training facilities, equipment and recruiting.  Chartering airplanes multiple times per week can get pricey, but basketball doesn’t raise the same kind of red flags for administrators that the overwhelming price tag of big time football does.  It also holds out the promise of prominence and profit with Cinderella stories and quick turnarounds that are more difficult to find in football.

Nonetheless, there is real and substantial money involved and the coaching carousel will go into full swing as athletic directors evaluate what’s happening with the one program in their portfolio that has the potential to make money (at least for the 224 schools that don’t have Division I football).  As one athletic director recently asked me to start creating a potential candidate pool, I thought it might make sense to take an analytical swing at evaluating what kind of value various coaches bring to their schools.

Part of the genius of “Moneyball” was the application of well-considered statistics to a field of performance in a way that was very different than the norm practiced by insiders in the baseball world.  Billy Beane and others found ways to optimize their investment in players by considering tangible, quantifiable contributors to value that were nonetheless not the sorts of things that baseball people consider.

With college coaches, the metrics most people point to are win-loss records, post-season appearances, championship wins, and, to a lesser degree, academic performance.  In order to dig a little deeper, I pulled together some easily research-able measures that would indicate objectively the kind of value that coaches contribute.  I included number of wins, Sagarin rating, total compensation (including bonus), attendance, and program profitability (total revenues minus total expenses), all using data from the 2011 season.  I experimented with different weights and could easily be convinced to adjust them, but for the purposes of this analysis I used the following:

I made an effort to scale each measure up or down to create comparable ranges (e.g. wins are in the 20 range and salaries are in the millions), so wins were multiplied by 10,000 and Sagarin by 3,300.  That yielded what I’ll call a “performance value”, which was a number in the millions for most programs.

To evaluate the value that each coach brought, I then applied that performance value number to the compensation number, yielding a “performance value per dollar of compensation”.  All of that math ended up yielding numbers that ranged from a high of 4.97 (Jim Boeheim at Syracuse) to a low of .05 (Leonard Hamilton at Florida State) for the 68 teams that were in the 2011 Tournament and have publicly available salary data for their coaches (10 did not).

Granted that a snapshot from a single season is not statistically compelling compared to a trend over several years, but given the short time horizons under which coaches often operate the results still reveal some interesting conclusions.

The first slide, below, looks at some of the iconic coaches in the NCAA–all men who one might predict to deliver outstanding value given their records and salaries.

All had fairly successful seasons from a competitive, profitability, and attendance perspective and their value numbers give an idea of what “good” performance might look like.

Next up we have the top 10 performers, which tells a different story than that of the icons listed above.

The reason that all of these coaches have dramatically higher value ratings than their iconic colleagues is mostly that their salaries are substantially lower (with the exception of Sean Miller at Arizona).  They deliver significant value in terms of wins, attendance, and overall profitability of their programs but they take a much smaller piece of the upside for themselves.  If I’m an athletic administrator, my interpretation is that they are generating a very good return for my investment in them.

Finally, if I am an administrator at a small school with limited resources, I might look for coaches who are delivering good value in return for compensation that fits within my budgetary parameters.  Here is the list of the top 10 value coaches who made less than $250,000 in 2011:

Eddie Biedenbeck had a remarkable year and the administration at UNC-Asheville should be tickled with the overall value that he and his team delivered.  There is a nice grouping of coaches ranked #32 to #42, all of whom would cost a school less than $200,000 per year and still have the potential to deliver value.  It is worth noting that the scale of that value in terms of gross profits or attendance will not be comparable to what a Duke or Syracuse might seek.  However, if you’re representing a school with an overall budget that is a fifth or less of those universities, you might do well to focus on terrific value as a starting place for your coaching search.