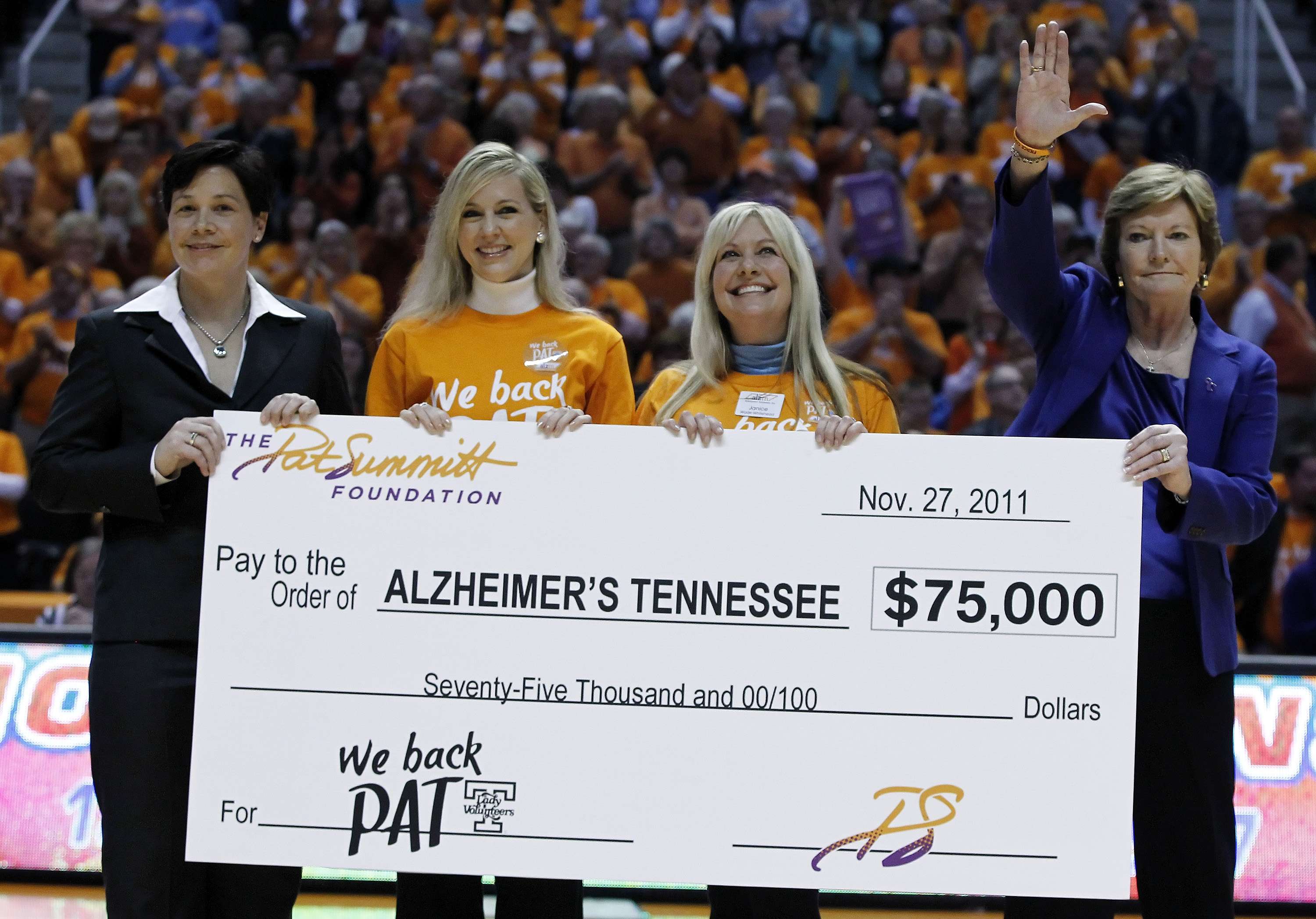 For the last 38 years, a prominent feature on the sideline of University of Tennessee women’s basketball games has been a woman who coached her teams to win basketball games by championing hard work, ethics, respect and responsibility.

During the 1974-75 season, a 22 year-old Pat Summitt was named the head coach of the Lady Vols basketball team.  This was in an age when the NCAA did not sanction women’s basketball, and just two years after Title IX, a piece of legislation which would come to promote gender equality in college sports, was enacted by Congress.

Summitt has not only graced millions of basketball fans’ televisions in her signature UT Orange suits and with her perfectly coiffed hair, but has also ensured that each woman who completes her basketball program graduates from college.  She has instilled her “Definite Dozen” teaching method, which promotes ideals like hard work, respect and responsibility, in the minds of the hundreds of young women who have played for her, and likely even in the mind of her son, Tyler, who grew up alongside Tennessee basketball and now plays for the men’s team.

Pat Summitt and her son, Tyler. Photo courtesy of the University of Tennessee.

For nearly four decades, Summitt has literally scaled summits, proving that women can be successful in any profession they choose, while also being involved parents.  She has served as an inspiration, not only to the women who passed through her program, but for the millions of young women who watched her become the winningest coach in NCAA basketball history.

On August 22, 2011, although at the helm of a heart wrenching announcement, Summitt once again sealed her place as a trailblazer for change in the world of college basketball.  On that day, Summitt bravely and boldly announced to the world, that at age 59, she was diagnosed with early onset dementia, Alzheimer’s type.  Rather than shirk away in the face of the diagnosis and keep it secret from the world and her competitors, she graciously shared her personal news with all who were listening.

Summitt’s act of sharing her diagnosis was gracious in the sense that once again, Summitt’s actions will serve as a lesson to the world.  Summitt’s fight against Alzheimer’s is a battle of courage, where the course of the battlefield is paved with opportunities to educate others, encourage future research of the disease and recognize that life goes on, even in the face of adversity.

Months after receiving her diagnosis, Summitt committed herself to the battle against Alzheimer’s by forming The Pat Summitt Foundation Fund.  The foundation exists to make grants to nonprofits which provide education, support and research of Alzheimer’s.

In seeking an administrator for the foundation’s funds, Summitt and her son, Tyler, sought the assistance of a family friend with years of operations experience, Danielle Donehew.  Donehew previously worked alongside Summitt as a coach for the Lady Vols and later as the Executive Vice President of the WNBA’s Atlanta Dream.  Presently, Donehew is the Associate Commissioner for Women’s Basketball for the Big East Conference.

“I was very honored when Pat and Tyler asked me to help with the foundation.  It was easy for me to accept; I was humbled and honored that they would ask for my help,” said Donehew.

In forming the foundation, Donehew has witnessed Summitt practice what she’s preached to players for nearly four decades:

“One of the things that she always teaches her players, is the importance of having a positive attitude.  You can’t control what necessarily happens to you, but you can control how you react to it.  What keeps going through my head is one of Pat’s Definite Dozen points, which are the twelve principles of her program.  One of those principles is, ‘Make Winning an Attitude.’  She always says, ‘winning is a choice and you need to maintain a positive attitude.’  I think for her, the beautiful thing about what she’s doing now is, instead of feeling sorry for herself, she’s taking action.  She’s said there’s not going to be any pity party.  She wants to help.  Pat’s never been passive; she’s always taken action.  This is a great example of that; she’s certainly not sitting idly by.  She wants to show others that if you receive a diagnosis like this, it doesn’t mean that you should stop living.  You need to continue doing your best,” Donehew remarked.

“I traveled over to UConn and met with Geno Auriemma [the head coach of the University of Connecticut women’s basketball team].  I talked with him about the vision of this foundation and Pat’s fight and commitment to fighting Alzheimer’s and hopefully using this foundation to do so.  Before I could get the entire story out of my mouth, Geno was rustling through his briefcase, and opened up his checkbook.  Immediately there, he wrote a check to the foundation.  He said, ‘This should show you that you have my blessing and I support this effort.’  I thought this was a beautiful thing for him to do immediately–he didn’t hesitate.  He was our first contributor of all the coaches in the game,” noted Donehew.

In the coming months, NCAA men’s and women’ basketball teams across the country will lend support to the foundation in various ways.  Presently, the best way for people to support the foundation is to visit the foundation’s website and make a donation.  However, Donehew is quick to note that a monetary donation is not the only way in which individuals can support Summitt’s cause:

“The most important thing, besides donating, is certainly awareness.  It is really important that as a society, that we are aware that there is a large number of folks in our population that are aging, and therefore, there’s a risk for more Americans to be diagnosed with this disease,” noted Donehew.

For the last 38 years, Summitt has coached teams to beat their toughest opponents.

Today, she is leading Americans in the battle to beat the opponent of 5.4 million Americans:  Alzheimer’s.