VCU: The ‘Smart’ Place to Go 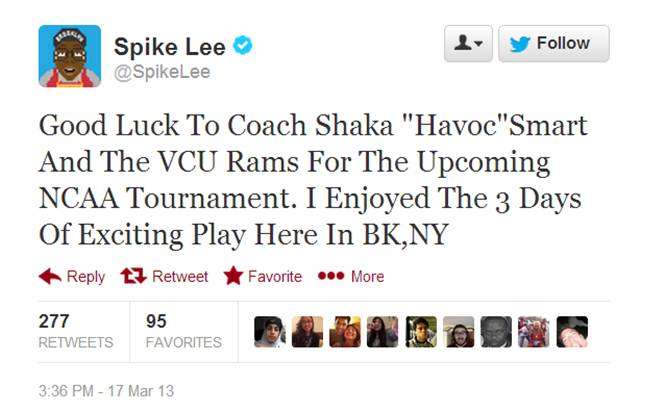 When Virginia Commonwealth University (VCU) burst onto the NCAA Basketball scene in 2011 and made it all the way to the Final Four, nobody thought anything of it. Everyone, including the teams in their own region, thought VCU was just another Cinderella team, one that  managed to get the magic slipper for one year, and would never get back amongst the elite of Men’s basketball again.

However, this has not been the case, as VCU has now reached the past three NCAA tournaments, and has won at least one game in all three years. Most recently, they gained their highest seeding ever (#5 seed), with an at large bid from the Atlantic-10 Conference, and defeating #12 Akron, in their 2nd round matchup.

VCU has now gained popularity all over the country, with support from celebrities like Spike Lee, who made sure to see them play at their conference tournament at the Barclays Center this year. He even tweeted to the coach and the players:

As evidenced by Spike Lee’s enthusiasm for the team, the uproar of VCU basketball has clearly reached a national level.

Shaka Smart, the Head Coach of VCU, exemplifies the image of the basketball team, school, and the city of Richmond, Virginia in general. For example, a professor from the University of Maryland, Ronald T. Rust, said it perfectly: “By highlighting him … (officials) project an image of the city — young, hip, multiethnic and successful — that is not necessarily Richmond’s current image.” Rust and many others say that by Smart staying in Richmond and not bolting for a bigger, more well-known university, he shows that there is reason for kids to come to VCU, whether they play basketball or not. The basketball program increases tourism, merchandising, and business growth in general, and makes students who are applying for colleges want to attend VCU, since the university and city are becoming more reputable as a result.

Furthermore, the program has increased interest by companies and businesses throughout the fifty states, as those travelling through town may be inclined to go see a great team play basketball. Lee Warfield, a president of a commercial real estate brokerage firm, in Henrico County, Virginia, says that the success of the team is lifting the profile of the region, and in turn luring clients in. VCU, and Richmond, being shown on national television gives the region a positive image, which is the exact image that Warfield and other in the area want.

Of course, VCU has benefited from the basketball success in other ways as well, from apparel sales to applications to donations. Last year, Kristi Dosh wrote on ESPN.com that apparel sales in 2011 topped $1.3 million during March Madness, donations to athletics were up 376 percent and donations to the university were up 46 percent.

All in all, it seems that having Shaka Smart stay in Richmond to coach VCU Men’s Basketball, at a time when the program is becoming increasingly better, will continue to have great outcomes for the region. VCU has now became a force to be reckoned with in Men’s Basketball, and nobody will be taking them lightly for years to come. Personally, I look forward to seeing what they can do in future years, and can’t wait to see when Shaka Smart and his players are cutting down the nets after winning it all.

Where Does All the NCAA Tournament Money Go?
March Madness Social Media Buzz