Beyond Fundamentals: The Story of Bob Stitt and the Colorado School of Mines Football Team 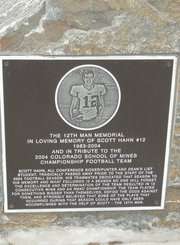 On January 4, 2012, college football fans watched as the West Virginia University Mountaineers scored 70 points–the most points scored by one team in a bowl game–against the Clemson Tigers in the Orange Bowl.  WVU wide receiver Tavon Austin, who runs the 40-yard-dash in 4.3 seconds, scored four touchdowns using a play that stumped Clemson’s defense.

After the game, a reporter commented to WVU head coach Dana Halgorsen, “The guys are still trying to figure out that one play that was successful for multiple touchdowns.  It’s recorded as a pass, but it kind of  looks like a volleyball tap-toss.  What is that?”

Halgorsen, smiling, responded, “Well, my good friend Bob Stitt at the Colorado School of Mines, gave me that.”

In 2000, Bob Stitt received the head coaching position at the Colorado School of Mines in Golden, Colorado–a town, which prior to Stitt’s arrival prided itself more upon the beer Coors Brewing Company makes than its college football team.  Prior to arriving at Mines, Stitt worked as an offensive coordinator at Austin College in Texas and at the esteemed Harvard University.  Before Stitt began his coaching tenure at Mines, the last coach to record more wins than losses during a career was the coaching duo of Elmer Capshaw and Tim Calahan, with a 4-2-1 record which was earned in the 1922-1923 season.

When Stitt arrived at Mines, he was met with a $5,500.00 recruiting budget.  “That wasn’t even going to send anyone anywhere.  We just had to recruit in the Denver area and foot the bill ourselves,” noted Stitt.

However, in 2004, the face of the Mines football program began to change.

On July 27, 2004, a 6’7″ kicker who was on the honor roll each semester he was at Mines, was driving home to Colorado after completing an internship in California.  Scott Hahn was looking forward to starting his senior year and returning to Golden for football camp.  The long-legged Hahn was a talented kicker who also showed skill in punting.  There were rumblings that his abilities could land him in the NFL.  However, with his kind disposition and impressive academic record, there was no question that Hahn would become a successful professional, whether it was in the NFL or elsewhere.

Driving through Utah, Hahn fell asleep behind the wheel of his car.  His car ultimately rolled several times.  Hahn was taken to a hospital, where he later passed away at the tender age of 21.

On a morning in early August 2004, when in previous years, his teammates would have been busy on the gridiron during two-a-days, Hahn’s teammates were dressed in freshly pressed black suits and sitting in the front pews of a Catholic Church in Hahn’s hometown of Aurora, Colorado.

Perhaps it was premonition, or maybe it was just a 20 year-old who on a whim, felt like wearing the number 12.  However, one thing is certain:  the Mines football team had found its 12th man.

In that moment, the nature and culture of Mines football changed.

In 2004, the Mines football team dedicated its season to its fallen teammate, Scott Hahn. # 12 patches were sown onto the chests of player’s jerseys.  Paper reminders were posted in the locker room of what the team was striving to do for Scott:  Win every game.

That season, the Mines football team recorded its best record in school history.  The team went 12-1, losing a bitter playoff game in Pittsburg, Kansas at a place called “The Jungle.”  That season, the team went 8-0 in its conference, the Rocky Mountain Athletic Conference.  Its quarterback, Chad Friehauf, won the Harlen Hill Award, which is Division II’s equivalent of the Heisman Trophy.

While the premature death of Hahn arguably fueled the Colorado School of Mines Orediggers to win on the football field in 2004, the coaching of the team by Stitt during that season and in subsequent years provided the team with the skills necessary to be competitive.

Perhaps what has made Stitt the most successful football coach in Mines history, is his ability to be an innovative play maker.  That innovation is what the world learned about when WVU’s Holgorsen credited him with the play which ultimately led the Mountaineers to score the most points in a bowl game.

In 2003, Mines began running the Fly Sweep play in practice.  It is a play intended to get the football into the hands of the wide receiver.  The play without any modification is risky, because it involves the quarterback remaining stationary while the receiver runs at full speed.  If the receiver doesn’t slow down while making the play, the team runs the risk of fumbling the ball.

That season, Stitt realized that the play was taking too much time to practice for the amount of benefits Mines was receiving from it.  As coaches do, Stitt continued to break down the play in his head to determine what he could do to make it successful.

“One day, it just hit me.  Why don’t we put it up in the air?  It was kind of like a reverse, and a lot of the time, you just put the reverse in the air.  If we did that, the kid doesn’t have to slow down and if he drops it, it’s an incomplete pass, because it is a forward pass.  Just a simple little change like that made it so effective,” Stitt explained.

What Stitt was able to do with a group of engineers that season was not lost on other coaches.

Then the head coach at Texas Tech, Mike Leach contacted Stitt about trading film, because he wanted to see how the Orediggers were running the ball so well in a passing offense.  According to Stitt, Leach was impressed with what he saw.  Holgorsen was an assistant coach under Leach, so it is likely then that Holgorsen first was introduced to Stitt’s Fly Sweep play, or what Holgorsen calls, “Quick.”

Later, Holgorsen would become the offensive coordinator at the University of Houston, a program long recognized for scoring many points.  With quarterback phenom Case Keenum, Houston has only kept up with its notoriety of scoring many points.  Under Holgorsen and today, Houston uses Stitt’s Fly Sweep play.  Stitt himself was there when Keenum learned how to properly complete the play.

After meeting Holgorsen two years prior at a One-Back Clinic, Stitt found himself in Houston for a Mines alumni golf tournament fundraiser.

“We played it in the morning.  We got done and it was early afternoon, so I went over to the University of Houston to see if they were practicing.  I knew that Dana had gotten the job there, and I walked right onto the field.  Dana was working with the quarterbacks and he kind of noticed me.  He said, “what are you doing here?” and asked if I saw him running the Fly Sweep.  I asked him why they weren’t putting it into the air.  He said he had forgotten that part of the play,” said Stitt.

Much has changed in Golden, Colorado since Stitt began his tenure as the Orediggers’ head football coach.

Downtown Golden has been completely renovated.  Mines has greatly increased its student population.  And the football team has seen winning seasons since 2004.

Today, Stitt’s recruiting budget is much larger than the $5,500.00 he was met with in 2000.  Stitt estimates the team spendss $30,000.00 to $40,000.00 in recruiting new players.  However, one thing that hasn’t changed is the method by which Mines recruits–a method unique to the school’s rigorous academic curriculum.

To put into perspective the rigor of Mines’ academic curriculum, in 2006 and 2007, Mines played in a post-season bowl game, the Dixie Rotary Bowl in St. George, Utah.  The game fell during finals for Mines students.  Given this, after 2007, Stitt told the RMAC commissioner that Mines would never go back to play int eh game.

How many other college coaches in America are telling their commissioners that they can’t go to a bowl game because it interferes with their players’ finals?

That being said, when recruiting, the first thing Stitt looks at is not how fast a kid can run the 40-yard-dash or how much he can bench press.

“We recruit transcripts first.  You have to see what kind of classes they’re taking and how they score in math and science.  We look at the film later, once we have a pool of kids who could do the engineering curriculum at Mines.  Then, we recruit the best of those kids.  We’ve been really successful getting engineers who can play football,” said Stitt.

It is safe to say, that Stitt has brought success to Mines football.

And its safe to say, we’ll be seeing his Fly Sweep play when the Orediggers take Brooks Field this fall.