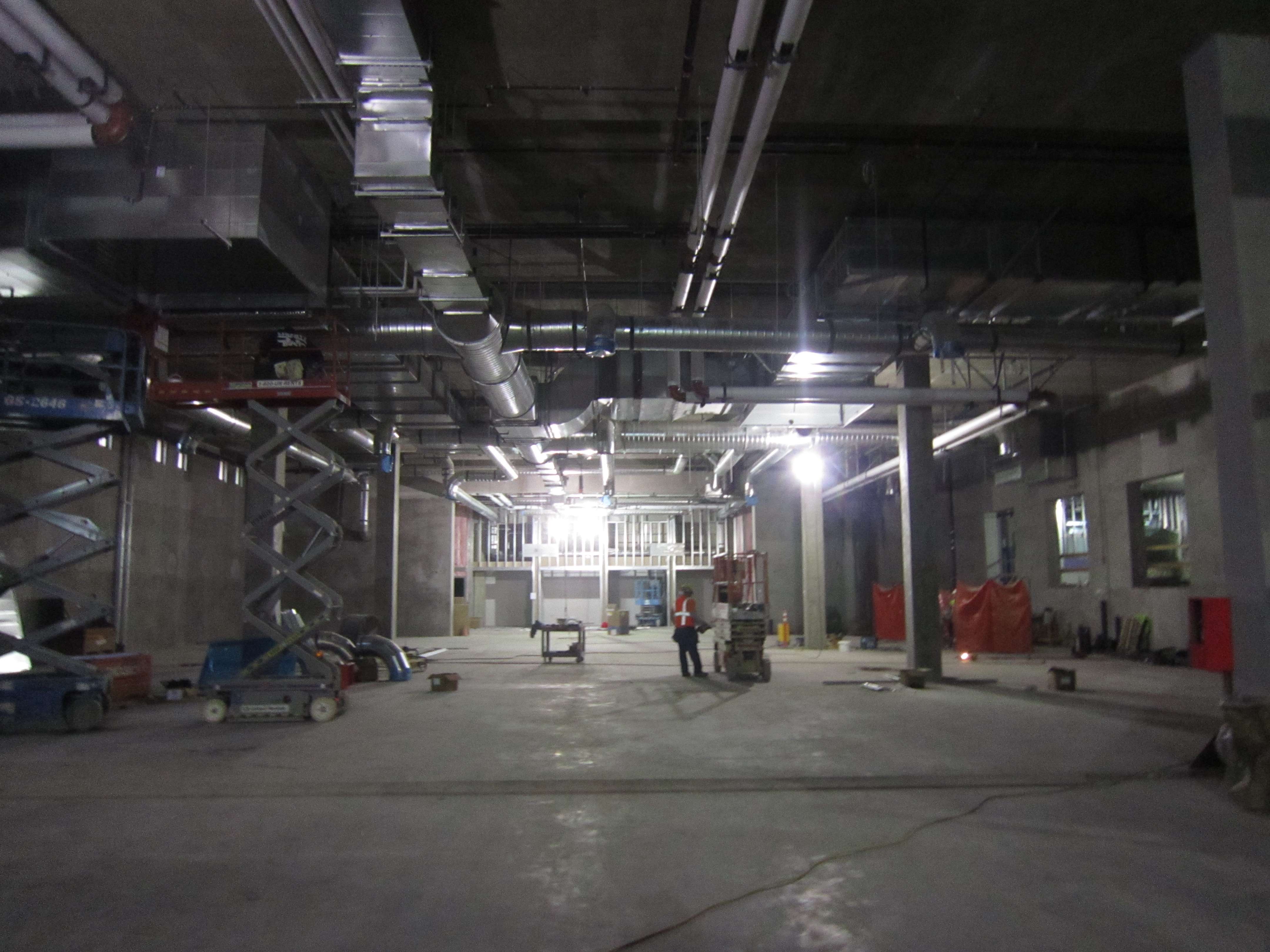 Recently, I had the great opportunity to visit the University of Southern California and take a private tour of several of the campus’ athletic facilities.

Senior Associate Athletic Director, Mark Jackson, was gracious to grant me several hours of his time as he led me through the athletic department’s present home in Heritage Hall and through the school’s current $70 million construction project, the John McKay Center.  Upon completion, the John McKay Center will be a state-of-the-art 110,000 square foot facility which will house athletic department and football offices, student-athlete academic services, a football locker room, weight room, sports medicine area, nutrition area, recruiting lounge and indoor practice turf.  To provide some insight into just how large of a project the John McKay Center is, the original 48,000 square foot Heritage Hall building was completed in 1971 for a cost of $2.8 million.

Our tour began in the lobby of Heritage Hall.  Heritage Hall boasts a proud collection of trophies and awards earned by various Trojan players throughout the years.  At the forefront of the display are the Heisman Trophy awards won by Trojan football players.  Jackson indicated that plans are still in the works as to how the numerous awards won by USC and its athletes will be incorporated into the John McKay Center.

However, Jackson noted that one thing Athletic Director, Pat Haden, wants to bring more attention to, is the Olympic success of USC student-athletes.  Outside of Heritage Hall, banners hang proclaiming this success.  USC athletes have won 258 Olympic medals to date, and if USC was a country, it would rank 12th in terms of gold medal count.  USC’s athletic department expects its gold medal count to increase with the 2012 Summer Olympics.

Currently, Heritage Hall is home to USC’s athletic department offices and football offices.  It also is home to the Jess Hill Weight Room, an athletic training facility and an academic support area.  Heritage Hall is largely decorated with statements and images reflecting USC’s tremendous athletic success.  A hallway is lined with pictures of USC’s 156 All-Americans, while the football offices have a wall which lists facts about USC’s National Championship winning teams.  There is also a wall featuring pictures of Sports Illustrated issues on which USC athletes have graced the covers and another wall with USC coaches who have been named the National Coach of the Year.  This wall includes the face of John McKay, the namesake for USC’s new $70 million athletic facility.  McKay’s son, John, works in the athletic department as a Senior Associate Athletic Director.  During my tour, Jackson and I ran into the younger McKay, who jovially joked with me that the new John McKay Center is actually named after him.

A shot looking into the football office space in Heritage Hall.

Below are some pictures of the facilities in Heritage Hall.

The weight room in Heritage Hall is adjoined by a room featuring cardiovascular equipment.

While all of the facilities I visited at Heritage Hall were all modern and of good size, one thing Jackson continually stressed was how each facility will increase in size and technology when the John McKay Center is opened.

“Heritage Hall, for 40 years, has been the heart of USC athletics.  It was state of the art at the time it was built, and over the course of 40 years, it has seen tremendous success, when you look at USC’s Olympic story, All-Americans, and football success.  All of those athletes filtered through here.  It served its purpose, but we realized that at the turn of the century, we were far behind the teams we were competing against.  With football’s success, Pete Carroll initiated the idea that we need to improve our facilities.  We received approval to move forward with the McKay Center in 2009.  In order to do this, it [the McKay Center] had to accomplish a number of things.  Number one, it had to have a mission of graduating our student-athletes.  That’s why you’ll see space dedicated solely to academic support.  We dedicated about 26,000 square feet of space to academic support.  Second, it had to utilize all 21 sports, and all 700-plus athletes.  This wasn’t going to just be a football building; all of the athletes would get to use it,” noted Jackson.

When Jackson and I walked over to the McKay Center, the truth of his comments became apparent.  Although it remains under construction, it is clear that the McKay Center will be a facility unmatched in terms of size, facilities and technology.

A view of the exterior of the currently under construction McKay Center which is scheduled to open in July 2012.

The main level of the McKay Center will be home to an 25,000 square foot academic support center.  “It’s on the main floor, which is exactly where it should be.  A lot of places, you walk in, and they want to throw football or basketball in your face.  Well, we want to throw academics in your face.  It’s a great message to send to recruits,” said Jackson.

The main level also features a grand dual staircase display.  Above the staircases will be three large television screens where various USC athletic highlights will be featured.

The three panels in this picture will all feature large-screen television displays which will continuously show USC athletic events and stories.

The lower level of the McKay Center spans 60,000 square feet.  It will be home to strength and conditioning, sports medicine and football locker rooms.  The football locker rooms will be state-of-the-art and also serve to promote USC’s interest in graduating its student-athletes.  Each football player’s locker will come equipped with a computer, through which they can complete assignments or communicate with professors.  The lower level also features an expansive sports nutrition area, which will have healthy foods and nutritionists on hand to assist USC student-athletes maintain a well-balanced diet.

A view of the 60,000 square foot lower level of the McKay Center. This picture does not do justice in showing how expansive this area is.

The third level of the McKay Center will be home to football and athletic department offices.  Each of the offices appeared to be of large size.  However, most impressive was head football coach  Lane Kiffin’s office.  His office is a suite, which includes a front area to hold informal meetings and then a back formal office.  The space is absolutely expansive and will definitely assist Kiffin with recruiting.

The USC Trojans have long been known for their athletic success.  However, with the birth of the McKay Center, this success will only continue and expand.  The finished product of the McKay Center will be a sight to be seen and will allow USC to compete in ways beyond how it does presently.

I would like to send a huge thank you to Mark Jackson for being a wonderful host and for generously spending hours of his busy day showing me the McKay Center and Heritage Hall.  Mark is truly an asset to USC, as I witnessed his dedication to the program, this project and the various student-athletes I saw him interact with.