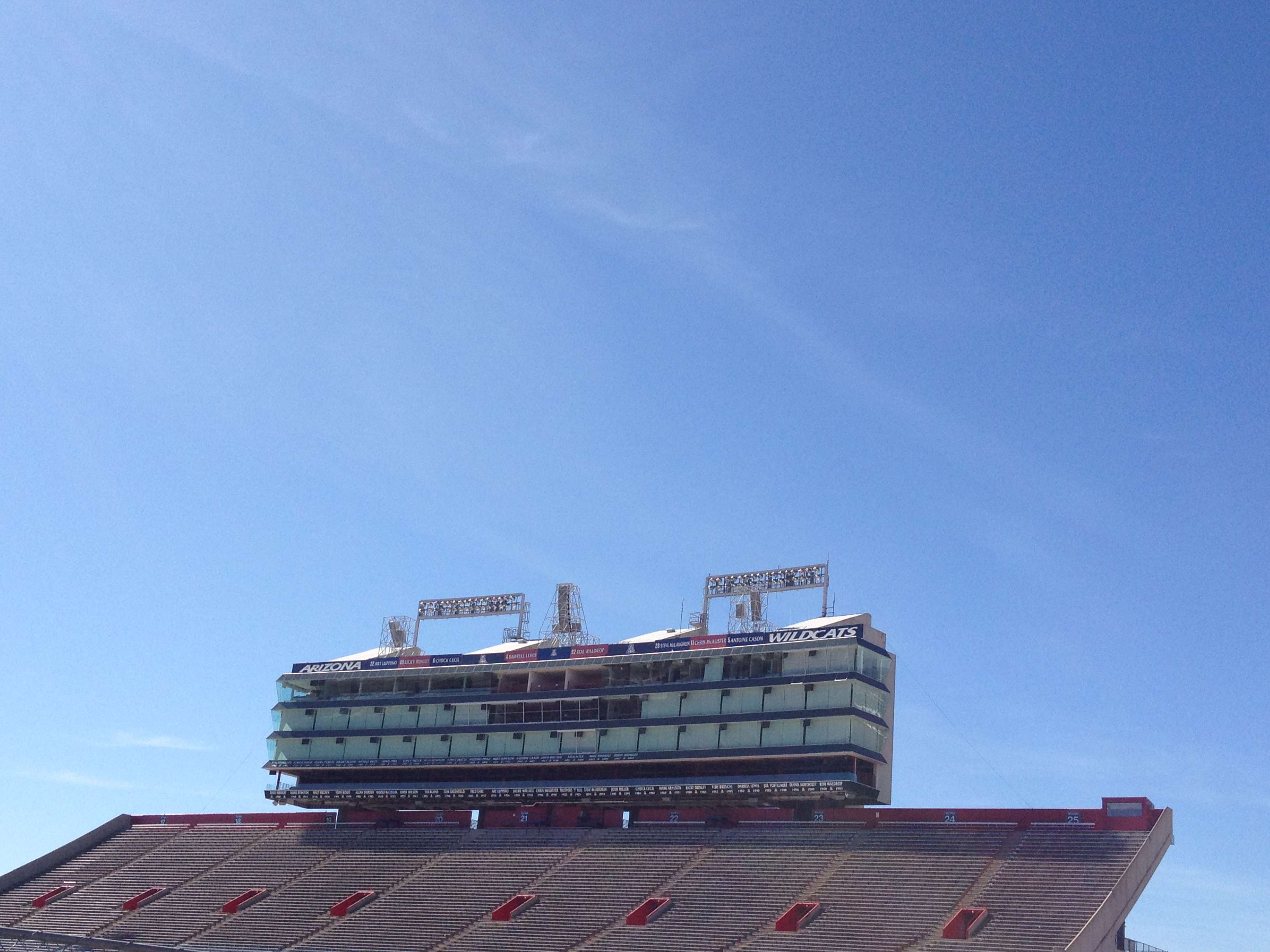 In 1926, the starting quarterback and catcher of the University of Arizona’s football and baseball teams died as the result of injuries sustained in a car accident.  Before passing away, John “Button” Salmon would whisper the words into the ears of Arizona football coach Pop McKale, which would come to be the school’s battle cry:

A memorial to John "Button" Salmon is present near the McKale Center.

In the 85 years since the young Salmon whispered the words which would become the battle cry of thousands of Wildcats, the University of Arizona has amassed a proud tradition of producing winning teams and successful student-athletes.  Arizona’s 19 teams have won 20 NCAA Championships over the years and have produced 152 Olympians.

Recently, I had the great opportunity to visit the campus in sunny Tucson and take a tour of some of the school’s athletic facilities with Director of Athletics, Greg Byrne.

ESPN's College Game Day was on hand at the McKale Center when I visited campus.

Joining the Wildcats in May, 2010, saying that Byrne has been an asset to the program since then, would be an understatement.  In a place like Tucson, where the nearest professional sports team is located over 100 miles away, the Wildcats are viewed by residents as local celebrities of sorts.  Byrne has the charisma and personality to make practical strangers feel like they have known him forever.  During our two-hour tour, he genuinely greeted everyone he passed, shook hands often and answered every question asked of him.  Every few feet we would walk, someone would say, “Hey Greg!” and most often, he’d respond with, “Hey!  You o.k.?”

The McKale Center on game day. Thousands of UA students pack the "Zona Zoo" for the white out against the University of Washington.

The McKale Center is also home to an academic area, sports medicine facilities, equipment operations and all of the athletic department’s offices.

Long known for its relationship with Nike, the Arizona athletics department is home to two rooms lined from floor-to-ceiling with Nike's; one for the football team and one for the basketball team. Each football player receives three pairs at the start of a season.

A helmet and shoulder pad room is also present in the McKale Center. Each football player is provided training in how to spot defects in a helmet as an extra layer of precaution against concussions.

Also present in the McKale Center is a state-of-the-art strength and conditioning facility, the Bill Estes, Jr. Family Strength and Conditioning Center.  The expansive area is notably marked with University of Arizona logos and pictures of successful former student-athletes like Jenny Finch, Jim Furyk and Lorena Ochoa, to further bolster Wildcat pride amongst student-athletes.

A look inside the Bill Estes, Jr. Family Strength and Conditioning Center in the McKale Center.

The Bill Estes, Jr. Family Strength and Conditioning Center also has 32 cardiovascular machines. If you look to the left of the picture, you can see football coach Rich Rodriguez preparing to workout on one!

The weight room in McKale is one of two weight rooms available to student-athletes.  A second weight room, for use by the basketball team, is also located in the Richard Jefferson Gymnasium.

The exterior of the Richard Jefferson Gymnasium, which resembles the former Bear Down Gym on the campus, only stands 30 feet tall, because the building is sunk 17 feet into the ground.

Richard Jefferson played basketball for the Wildcats from 1998 to 2001.  Drafted by the Houston Rockets, Jefferson presently plays for the San Antonio Spurs.  In 2007, Jefferson made what is believed to be the largest donation made by a professional athlete to his alma mater, when he donated $3.5 million dollars to build the Richard Jefferson Gymnasium.

The Richard Jefferson Gymnasium is home to the school’s basketball and volleyball practice facilities.  It has two full-court basketball courts and five volleyball cross courts.

Two full-court practice courts are found inside of Richard Jefferson Gymnasium. The courts are also utilized by the volleyball team.

Overlooking the courts is a weight training and cardiovascular center specially designed to meet the size requirements of basketball players.

A view of the strength and conditioning facility used by Arizona's basketball players which is located in the Richard Jefferson Gymnasium.

Greg and Mark, who both stand tall at 6'6", were good sports and demonstrated the equipment. "No one has ever asked me to demonstrate equipment during an interview," said Byrne.

As mentioned above, all of the athletic department’s offices are currently housed in the McKale Center.  However, in 2013, Arizona’s football team will have new offices located in the brand new North End Zone facility in Arizona Stadium.  Byrne explained that presently, Arizona’s football team is one of few BCS teams whose offices are located in a basketball facility.

Construction on the North End Zone project recently began and will be completed in 2013. However, the Wildcats will still play the 2012 season at Arizona Stadium.

The school recently commenced construction on the $72,300,00 North End Zone project, which has a scheduled date of completion of June 2013.  The 183,683 square foot project will add football offices, a new football locker room and football strength and conditioning center.  The addition of the North End Zone strength and conditioning center means that there will be an impressive three weight rooms for student-athletes to access at the University of Arizona.  A sports medicine area for student-athletes and cafeteria open to all University of Arizona students will also be present in the North End Zone facility.  The North End Zone facility will also be home to new concourses and loge and club level seating.

A rendering of the North End Zone project.

A rendering of the new North End Zone seating.

The seats in the new North End Zone will face the 5,356 foot video board, pictured above, which made its debut in Arizona Stadium in 2011 and is the largest video board in the state of Arizona.

Currently, all suites at Arizona Stadium are enclosed. The North End Zone project will give fans the option to purchase open-air suites.

The completion of the North End Zone facility in 2013 will further signal the vast improvements of Arizona’s programs and facilities which Byrne has spearheaded as Director of Athletics.

Most importantly, however, it will give University of Arizona student-athletes one more reason to bear down.

Sincere gratitude is owed to Greg Byrne for granting me a generous amount of time in his busy schedule and opening up the University of Arizona’s athletic facilities to me and BusinessofCollegeSports.com’s readers.  A big thank you is also owed to James Francis for assisting with the tour and forwarding renderings of the North End Zone project.  Thank you both!