Welcome to the Quack Cave 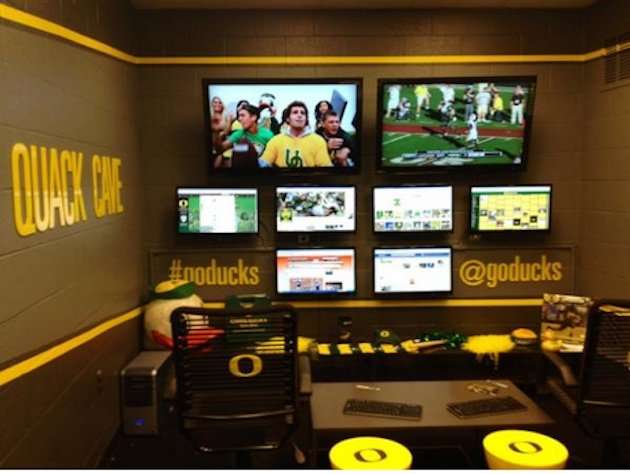 The Ducks are at it again.  You’ve most likely seen the flashy Nike uniforms and have probably heard about or seen the lavish facilities. Now the innovative minds at the University of Oregon have created the first digital media hub in college athletics, the Quack Cave.

What exactly is a digital media hub or Quack Cave?  For starters it’s a central room where Oregon can monitor and send out information via their social media accounts.  However, this is the Ducks and just any old media room wouldn’t do, so they went and made a command center that would make Bruce Wayne jealous.

Like any command center worth its salt this one comes with a top secret element to it.  Back in April Craig Pintens, UO Senior Associate Athletic Director, tweeted the following, “Are there any UO Interior Architecture majors that follow?  We have a top secret project for you. #GoDucks”.  UO grad students Miranda Lee and Anna Miron responded, and after a short couple months, some serious TV shopping, finding some cool iPads that double as remotes, and deciding which were the coolest wireless keyboards, the two grad students and the UO unveiled the Quack Cave.  Take a look here:

So why exactly do the Ducks think this was money well spent?  For starters UO boasts almost half a million social media followers, which is the 7th highest nationally.  This resource gives them the ability to communicate directly with everyone of those followers on a personal basis.  When people have questions, they will get answered.  When a celebrity watching a football games tweets something about the Ducks, it will get noticed and passed along for everyone to see.

Once again it looks like Oregon is ahead of the curve.  As college football fans, and society in general, become more reliant on technology and become more savvy, social media is going to become increasingly more important.  An idea like the Quack Cave is relevant because it’s such a smart way for a school to make its fans aware of its social media and then be able to use that medium to send them content while pushing their brand.