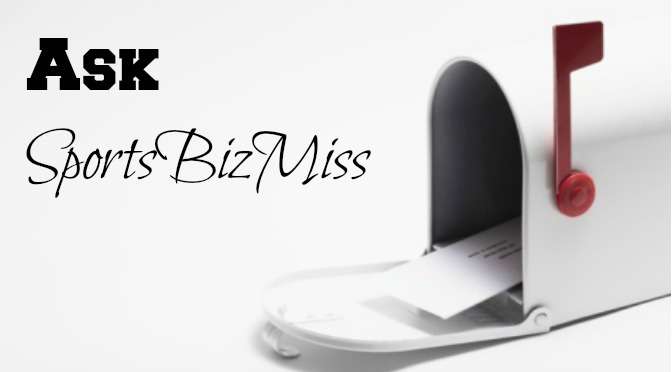 Until now, we haven’t had a mailbag feature here at BusinessofCollegeSports.com, but I do check the search terms people use to find our site almost every day. So many times I wish I could reach out to the person and see if they found what they were looking for, but I don’t actually know who searched the term or how to get in touch with them…so, I’m going to pretend they emailed me and answer a few I’ve seen over the past week.

If you want to submit a question for a future edition of “Ask SportsBizMiss,” instructions are at the bottom of this post.

Here’s a sampling of searches I’ve seen over the past week….

If you were searching for a college volleyball program that turns a profit, you probably didn’t find one. It’s extremely rare for a sport outside of football or men’s basketball to end the year with net revenue (it’s not technically correct to call it “profit” since athletic departments are nonprofit entities). I’m asked about baseball and ice hockey most often, and you can find a program here or there that has a small amount of net revenue, but I’ve never seen a volleyball program with net revenue at the end of the year.

I decided to take a look at a couple of women’s programs first. Penn State and Texas finished last season ranked #1 and #2, so I checked out their financials for women’s volleyball:

Unfortunately, I don’t have the time to do this for every school, but I think you get the picture.

The fact of the matter is that few (and by few, I mean a handful) of programs outside of football and men’s basketball generate any net revenue. Many don’t make enough to cover scholarships for the student athletes within that sport, much less coaching salaries, trainers, insurance, travel, etc. I wrote last year about how even the top women’s basketball programs don’t generate enough revenue to cover their expenses.

So, sorry whoever searched this, but I doubt you’ll find any volleyball programs generating net revenue.

If you were looking for naming rights on stadiums, I have an entire database of every deal I know of in college athletics here.

This one is easy: $20.3 million total, $17.6 million from football. The Seminoles also had another $15.3 million in contributions to football, and no doubt much of that came from ticket-related contributions (those donations you have to make in order to buy season tickets, get better seats, etc.).

There seems to be great concern that state and local governments are subsidizing athletic departments, because the NCAA financial disclosure happens to include a category by this name. Don’t fret. Many times I’ve found the amount reported by an athletic department as support from governmental entities is lottery revenue earmarked for Title IX purposes, meaning it goes to fund scholarships for female student athletes. State and local governments aren’t just cutting checks to athletic departments to fund losses or otherwise bail them out. I looked at a couple of examples in my book, Saturday Millionaires, if you’re interested in learning more about this subject. You can download Chapter 1 for free here.

Any financial numbers I share are from financial disclosures each university files with the NCAA annually. The latest figures are from 2012-2013.