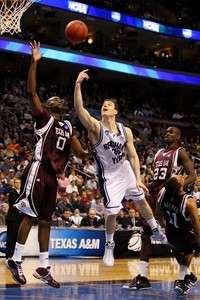 Image via Getty Images by @daylife

If you read this site regularly or follow me on Twitter, you know that I am in Ireland from May 17-25th. While I’m away, I’m sharing with you the work of Patrick Rishe, my collegue at SportsMoney on Forbes.com. This is the fourth of a series of pieces Patrick did for SportsMoney on college basketball finance. You can find all of my pieces on football finance here.

One of my SportsMoney colleagues, Kristi Dosh, recently pieced together a string of interesting and informative posts regarding the economics of college football.

With March Madness upon us, it’s time to pay similar attention to the financials associated with the other cash cow of collegiate athletics – Division I men’s basketball.

Today’s piece marks Part 1 of a multi-layered analysis of the business of college basketball that will span the next several months.

The purpose of today’s piece is to simply whet the reader’s appetite and provide a general overview of the financial landscape of the largest Division I men’s basketball conferences and their revenue-generating ability.

Like the afore-mentioned college football stories, the data reported herein is from the U.S. Department of Education. Federal statute requires schools to report the financials for their athletic departments, and it also helps define itemized expense and revenue categories which builds uniformity in data reporting.  This makes for a robust data source.

Part 1 of this series focuses just on (a) the size of men’s basketball revenue among the top Division I conferences and (b) the percentage of revenue from just men’s sports that owes itself to basketball.

To begin, I identified the Top 14 Division I men’s basketball conferences as rated by the RPI.  The RPI is a ranking system that has been given some credence for being more analytically-based than oft used media-based or coaches-based polls.  The conference RPI rankings as of Monday, February 28th are as follows:

Next, summary financial data from the U.S. Department of Education for the 2009-2010 academic year is obtained to conduct a financial comparison among these conferences.  Note that this data does not coincide with play from the 2010-11 season.

Based on the table:

– The Big East, perhaps not surprisingly given the number of teams within the conference and the quality of the conference, is the top revenue-generating conference for men’s basketball with over $154 M in revenue and $16 M ahead of its closest revenue competitor;

– The Big Ten and ACC are 2nd and 3rd with $138 M and $133.4 M respectively, with nearly a $9 M advantage over the lower-tiered BCS conferences in terms of basketball revenue;

– Not surprising that the other 3 BCS conferences (SEC, Big 12, Pac 10) rank 4th, 5th, and 6th in men’s basketball revenue, ahead of all non-BCS conferences;

– Among the 6 BCS conferences, the Big East and ACC are the only 2 conferences that receive at least 30% of their total “men’s sports” revenue from basketball.  This speaks both to the tastes and preferences for men’s basketball in those conferences and regions as well as the relatively lower football earnings realized by those conferences;

– Analogously, the strongest football conference financially (SEC) has the least reliance on basketball revenues as it comprises only 16.3% of their league’s “men’s sports” revenues;

– Conversely, the non-BCS conferences that lack FBS football squads (the A-10, Missouri Valley, West Coast Conference and Horizon Leagues) all count men’s basketball as at least 40% of their overall “men’s sports” revenues.

The last portion of this summary and introductory analysis is to compare “men’s basketball revenue per school”.  Here, we simply take the aggregate conference revenue reported for men’s basketball and divide by the number of teams in the conference.  This metric is useful because it controls for the number of teams in the conference, since failing to do so may inflate how well a conference is truly doing financially compared to its peers.

Comparing the conferences by this metric yields the table below:

– Bigger isn’t always better for individual schools.  The Big East is only the 4th most lucrative men’s basketball conference on a ‘per school’ basis using this metric.  Clearly, having a “16-team mega-conference” creates the most men’s basketball revenue as we saw in the preceding table, but the flip-side with having a large conference is you have more members to split the revenue pie with;

– And lastly there is a big jump in “per school” men’s basketball revenues between the BCS and non-BCS schools.  The gap between the Pac-10 and Mountain West is approximately $4 M per school, with the top revenue-generating non-BCS conferences per school being the Mountain West, A-10, and C-USA each pulling in somewhere between $3.5 M and 4.0 M per school.

– Which schools have the most profitable men’s basketball programs?

– How strong is the correlation between the profitability of a men’s basketball program and the graduation rates of the student-athletes that go through those programs?

– How strong is the correlation between teams that “make it to the dance” and their student-athlete graduation rates?

– Which programs have seen the most financial growth over the last 5 years?

Stayed tuned as we delve deeper into the economics of college basketball in Part 2 of this series.