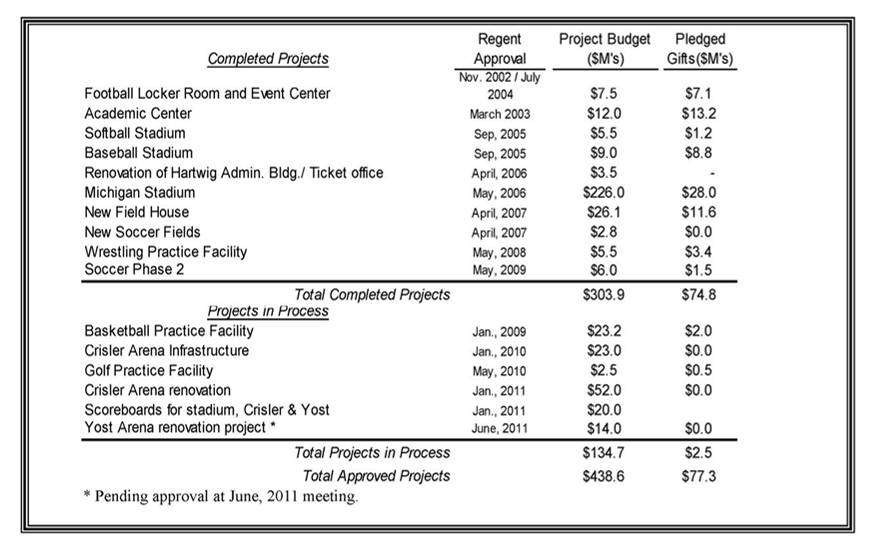 I’ve shown you snippets of budgets from Georgia, Louisville and Ohio State. Today I’ve got Michigan’s 2011-2012 budget, and I want to focus on what athletic departments spend on facilities alone.

As you’ll remember if you read this site regularly (and if you don’t, why aren’t you?), Michigan is on of the 22 self-sustaining athletic departments. In fact, they’re projecting an operating surplus (that’s operating revenue minus operating expenses, which means it does not include capital expenditures) of $11.4 million for the upcoming fiscal year.

However, because of renovations to Crisler Arena (basketball) and Yost Arena (hockey), they will have a net loss of $18.5 million for the year. That’s, of course, not a loss that reflects the athletic department operating in the black. It’s just a depletion in their overall fund balance.

As you can see, gifts help make these capital projects possible, but they only make a small dent in the total amount needed. The athletic department has incurred debt for a number of the projects and has budgeted $13.2 million in expenses for this debt service for the coming year. This is up $2.2 million from last year due to debt incurred for the Michigan Stadium and Crisler Arena projects.

In addition to this debt service, Michigan has another $14.4 million budgeted for “Facilities Expenses” and a “Deferred Maintenance Fund Transfer”. I should point out that $4.5 million of the $14.4 million  mentioned is for the “Deferred Maintenance Fund Transfer”. This is a fund set up during the 2003 fiscal year that is being built up to fund future “major repair and rehabilitation projects” for athletic facilities. Because Michigan turns an operating profit each year, they’re able to put aside for future capital projects in ways I’m sure many other universities cannot.

The $14.4 million I just detailed on top of the $29.9 million set aside for renovations to Crisler and Yost and $13.2 million in debt service on facilities adds up to $57.5 million Michigan is spending next year on facilities alone.

Over time, however, the money may be well-spent. First, there’s a lot of keeping up with the Joneses that happens amongst athletic departments. You don’t want to lose a recruit because another school had nicer locker rooms or a better lounge for student-athletes. Better athletes hopefully translates into better success on the field. The national attention that comes with success can mean more applications for the university. It can also mean greater brand recognition, which translates into additional revenue from licensing and advertising.

For a school like Michigan who sells out football games, adding additional seating areas generally pays for itself over time. In the first season of having new club level and suite seating areas in Michigan Stadium last year, Michigan saw a $5 million increase in revenue attributed directly to those seating areas.

What do you think? Are expenditures on facilities getting out of hand? What can be done about it? If you simply stop renovating or upgrading, will the university fall in stature both on and off the field? Are naming rights the wave of the future in terms of funding renovations and upgrades?