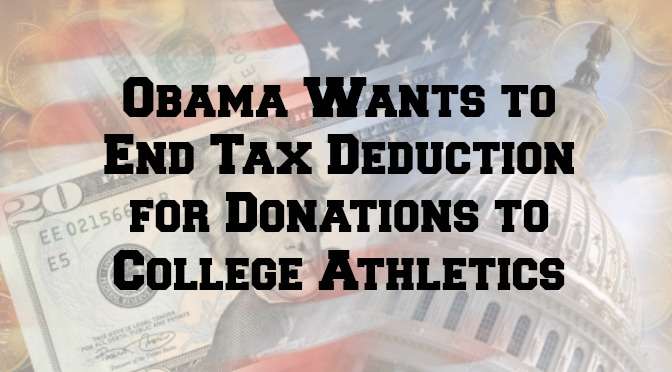 The new budget President Obama sent to Congress this week calls for an end to tax deductions for donations made to college athletic departments for season tickets or preferential seating, also known as seat-related contributions. Currently, 80 percent of these donations are tax deductible.

The administration claims people would pay an additional $2.5 billion in taxes over the next decade with this change.

No doubt, college athletics administrators will watch this development closely. Donations are the highest source of revenue in virtually every athletic department. Yes, even higher than those television contracts you hear so much about.

Here is a random sampling of schools throughout FBS to give you an idea of the revenue they generate from donations compared to their total distribution from their conference (television contract, championships, etc.) and the NCAA (March Madness):

Source: Reports filed by schools with the NCAA for the 2012-2013 school year
The numbers above include all contributions reported for the year, not just donations made as required for season tickets or preferential seating. However, those seat-related donations account for the majority of donations on a year-to-year basis according to the development folks I’ve interviewed.
Would fans still donate if they no longer received that 80 percent tax deduction? One athletic director told me for my book Saturday Millionaires a couple of years ago that he thought donations would drop by as much as half without the deduction.
Would fans really be willing to give up their seats and all the years of points they’ve built up if they weren’t getting the tax deduction? I’m sure there would be some at the lower end of the scale who might not see it as such a good investment anymore, but I’m not wholly convinced it would have a major impact on giving.  I’d love to hear from those of you working in development in the comments section!
As a side note, Obama’s budget plan also calls for an end to the use of tax-exempt bonds to build facilities for professional sports teams. The plan states debt to finance those facilities would be taxable if 10 percent or more of the facility is used for a private business (i.e., a professional sports team). Implementation is projected to be worth $542 million in tax revenue over ten years.