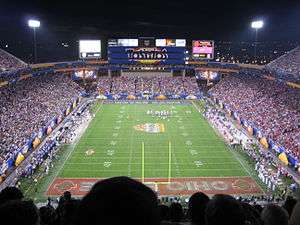 I’ve written previously on Playoff PAC, the principle opposition group to the BCS.  They’re making the news again, this time with an IRS complaint they have filed against the BCS Bowls.

In a 27-page complaint, Playoff PAC alleges that the bowls are not complying with their 501(c)(3) charitable status.  A 501(c)(3) is tax-exempt and is the designation given charitable organizations like the American Red Cross and Susan G. Komen for the Cure.

Playoff PAC co-founder Chad Pehrson had this to say about the filing:

Take a look at some of the practices Playoff PAC uncovered:

I’m not a tax expert, but I’m guessing the bowls can argue these things are all part of your average compensation package for these types of executives.

Perhaps a little more difficult to explain are the undisclosed lobbying efforts uncovered by Playoff PAC.  The Fiesta Bowl reported that it did not engage in lobbying efforts on its federal tax return.  However, Playoff PAC uncovered $1.2 million going to one lobbying firm for “consulting” and at least two other known lobbying firms receiving undisclosed sums.  The Fiesta Bowl also registered with the Arizona Secretary of State as a “principal” for the past five years, a designation that would allow it to employ lobbyists to “attempt[ ] to influence the passage or defeat of … legislation by directly communicating with any legislator.”  In addition, it appears the Fiesta Bowl backed legislation that allowed it to keep its profits from a bowl held in a state-ownd stadium while taxpayers were burdened with the costs of the game.

While the Orange Bowl was also cited as having engaged in undisclosed lobbying activities, it seems the Fiesta Bowl has been continually pushing the limits.  Five Fiesta Bowl employees made donations to political campaigns and were seemingly reimbursed by the Fiesta Bowl.  Charitable organizations are not allowed to make political contributions, so this would have been a circumvention of the 501(c)(3) regulations.  This situation was first reported by The Arizona Republic and since the Secretary of State has opened a criminal investigation.

Playoff PAC hopes their IRS filing will show that the BCS Bowls are not charitable organizations in need of government assistance (in the form of tax exemption and government grants).