How much are Big Ten head football coaches making? 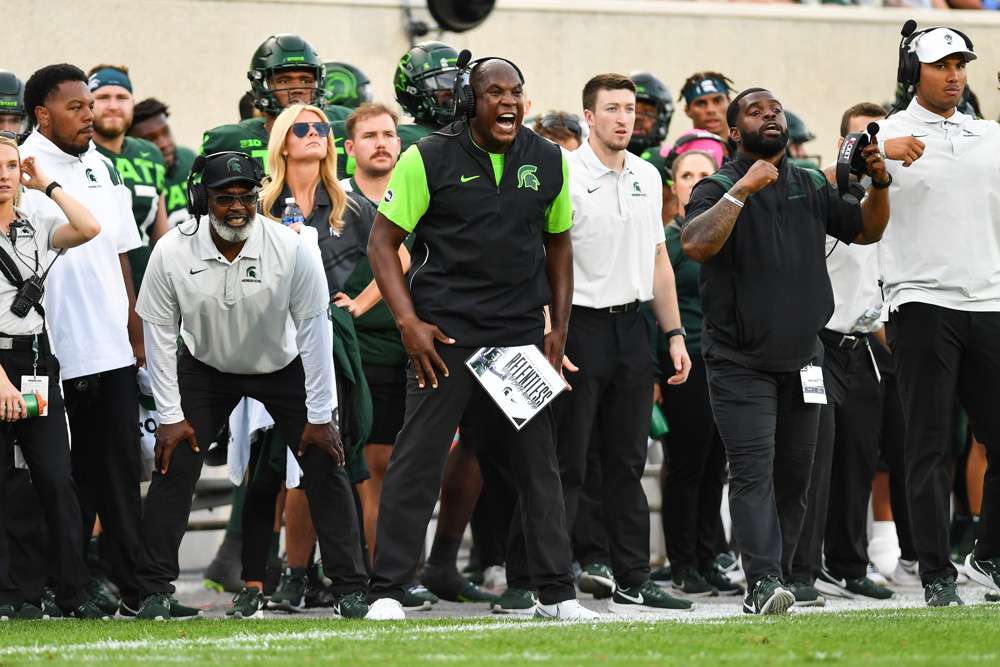 College football coaching salaries have been on a seemingly nonstop trajectory, with Big Ten coaching salaries typically skewing far above the average college football coach salary. A new generation of top coaching talent has been cited as one of the main reasons behind the league’s improvement over the past decade. While all head coaches in the B1G earn handsome paychecks, some are larger than others.

In the Big Ten conference, all 14 head football coaches returned. But many revisited their contract situations, leading to changes in their annual values and their standings within the Big Ten.

The Breakdown of College Football Coaches Salaries in the Big Ten

Ryan Day has kept Ohio State a national championship contender after making the move from offensive coordinator to head coach. After winning a Big Ten title and advancing to the College Football Playoff semifinals in year one, Day led the Buckeyes to a national championship appearance in 2021, then led a Rose Bowl win in his third year.

In May 2022, Ohio State restructured Day’s contract to keep him at the university until 2028 and tied for the highest salary in the conference. ESPN reported that Day’s yearly earnings will increase from $7.6 million to $9.5 million. In total, the deal runs for seven years and is worth $66.5 million.

James Franklin signed a new 10-year contract in November that keeps him among the conference’s highest-paid coaches.

While not at the level of the new contracts for Ryan Day and Mel Tucker, Franklin is set to earn $7 million annually, with additional guarantees that could make the contract worth up to $85 million. This is Franklin’s fourth contract while at Penn State and aims to keep him around through the 2031 season.

Because Northwestern is a private university, it is not obligated to release information on coaching salaries.

But it was reported that Pat Fitzgerald received a 10-year extension in 2017, with USA Today reporting that the coach made $5.1 million that season. If true, that could make him one of the top paid coaches in both the conference and the sport.

Fitzgerald has built Northwestern and taken them to new heights during his tenure, and he’ll look to guide them to another new level over the life of his remaining deal.

After struggling in his first year in East Lansing – posting a 2-5 record during a COVID shortened season – Mel Tucker took off in Year Two and cashed out. The Spartans finished with an 11-2 record with wins over ranked Miami, Michigan and Pitt squads.

As a result, Michigan State rewarded Tucker with a contract that ties him with Ryan Day for the highest salary in the Big Ten and for fifth in all of college football. Tucker will earn $9.5 million annually, with the deal stretching over 10 seasons for a $95 million total value.

Allen built off an impressive 8-4 2020 season, the Hoosiers soared to Big Ten title contention in 2021, posting a 6-2 (6-1 Big Ten) record as well as finishing ranked 13th nationally. Though Allen was rewarded a contract extension in 2020, Indiana doubled-down in 2021, restructuring Allen’s deal to pay the Hoosier head coach $4,900,000 annually through the 2027 season.

One of the first head coaching hires of the current cycle, former Baylor and Carolina Panthers head coach Matt Rhule is now tasked with leading the Cornhuskers back to Big Ten West contention.

Rhule is set to make $72 million over eight years, putting him in the top tier of Big Ten coaching salaries. In an interesting contract wrinkle, Nebraska will offset the majority of the $34 million the Panthers owe Rhule in his buyout, according to a report by Ian Rapoport of NFL Network.

Jeff Brohm helped Purdue soar to one of its best finishes in his tenure with a 9-4 record and Music City Bowl win, and the result was a reworked deal that should keep Brohm at the helm for the foreseeable future.

Brohm agreed to an extension in April that keeps in with Purdue until 2027, with his 2022 annual salary reaching $5.1 million. The deal also opens up more money to spend on coordinators and assistant coaches, as Purdue looks to continue its forward momentum.

Ferentz is in his fourth decade as Iowa’s Head Coach and year-after-year, Iowa seems to contend in the Big Ten with Ferentz at the helm. The Hawkeyes have been an annual contender in the Big Ten West, stealing the division crown in the last weekend of the 2021 season to secure a Big Ten Championship appearance.

Ferentz received a major boost in his annual salary as a result. His yearly earnings will increase from the expected $5.1 million to $7 million thanks to a new extension. In total, the deal will run for eight years and be worth $56 million.

The Gophers were college football’s cinderella in 2019, with an 11-2 record and a late season loss to Wisconsin away from their first Big Ten Championship appearance. For their performance, Head Coach PJ Fleck was awarded a 7-year $33,250,000 extension through 2026.

The university gave that number a boost last November with a new contract. His annual salary improves from $4.65 million to $5.1 million, with a significant buyout that decreases in each of the years of the deal.

The Illini went in a different direction after a disappointing 2-5 season–hiring Bielema the long-time Wisconsin signal caller from 2006-2012. Bielema will look to replicate the success he had in Madison and is set to earn $4,200,000 annually over six years.

Incentives include a $100,000 bonus if Bielema takes the Illini to their first ever Big Ten Championship game and $200,000 if Illinois wins the Big Ten. In the case that Illinois makes a “New Year’s Six” bowl, Bielema will earn an additional $300,000.

With their last winning season coming in 2011, Bielema will look to elevate the Illini program in the always challenging Big Ten Conference.

Michigan had a Cinderella season in 2021, knocking off Ohio State in the Big House and winning the Big Ten Championship to earn a trip to the College Football Playoff. Coach Jim Harbaugh flirted with the NFL’s Minnesota Vikings about becoming their head coach, but ultimately decided to return to Ann Arbor and was rewarded with a new contract to reflect the program’s recent success.

Harbaugh’s updated deal extends his contract by a year to the 2026 season and holds an average annual salary of $7.334 million over the length of the deal. If Harbaugh decides to test NFL waters again, the contract brings a coach-friendly buyout: $2.25 million after 2023, $1.5 million after 2024 and $750,000 in any season afterward.

The Badgers lured Fickell out of Group of Five powerhouse Cincinnati with a seven-year contract that will average $7.8 million per year and start at $7.5 million. For comparison, previous coach Paul Chryst earned just over $4.2 million per year in his contract, which was set to run through 2026 before his midseason firing. Fickell’s new deal at Wisconsin is also a considerable raise over his salary at Cincinnati.

Greg Schiano built Rutgers from the ground up in the 2000s. With the program fallen back on hard times, it was time to reunite with their patron saint.

It wasn’t easy to lure him back. Schiano initially turned down an offer that was given to him right after the 2019 regular season. But a little more persistence on the part of RU made Schiano reconsider and soon, an eight-year, $32,000,000 deal was being signed. Up to $975,000 each year will be up for grabs in incentives for Schiano.

Mike Locksley arrived just outside of the nation’s capital from arguably college football’s capital over the past decade. The former Alabama offensive coordinator has brought momentum and encouraging recruiting success to College Park and recently agreed to a five-year contract extension in April that brings his annual salary to $4 million per year, between annual base salary and supplemental income.