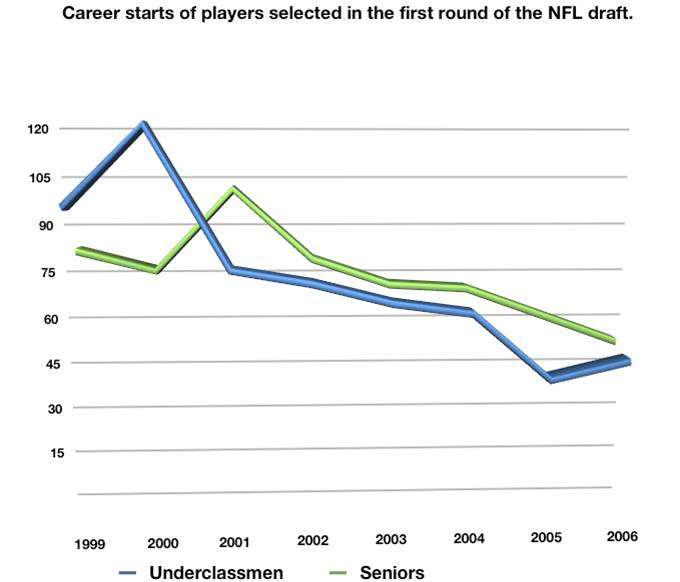 Every year, a group of underclassmen forego their senior year to enter the NFL Draft. The fame and money of the NFL has had some players flocking to professional football like grown men to a Hooters restaurant.

Over the past dozen or so years, the number of college amateurs entering the draft has steadily increased. This year, a record 56 players renounced their remaining college eligibility in favor of pursuing a career in the NFL.

With all of that said, there’s one important question that really hasn’t been answered: Do underclassmen have better NFL careers than their senior counterparts?

So, I investigated. I looked at the career starts of every player drafted in the first round in an eight-year period (1999-2006). I used career starts to gauge a player’s long-term success in the NFL. More starts represent a more serviceable player with usually a longer tenure in the league.

Here’s a graph distinguishing the average career starts between juniors and seniors drafted in the first round.

This illustration shows that in 1999 and 2000, many underclassmen such as Edgerrin James, Jamal Lewis, and Jevon Kearse experienced great success during their careers. But since then, seniors have shown that they are a safer bet when it comes to first round selections. During the 2001-2006 drafts, first-round underclassmen have started 16% less games than players who have four years of college experience.

The most underclassmen busts appear at wide receiver. Twelve junior WRs were drafted in the round one from 99-06. They have combined for a paltry total of seven Pro-Bowls, five of which belong to Andre Johnson. David Terrell, Freddie Mitchell, Ashley Lelie, Charles Rodgers, and Troy Williamson were all underclassmen who have had vastly disappointing careers.

Now of course this isn’t a concrete report. There are many variables such as opportunity, injury, and coaching, but both sides of this story face the same issues, so I consider those a wash. The main culprit for lack of success for these younger players has to be lack of experience and preparation.  More often than not, many of the underclassmen that do come out a year early have one stellar season. That one solid year usually excites NFL teams and players alike.

But lately, the excitement of many of these underclassmen seems to wear off quickly.

Take recently released Aaron Maybin as an example; the redshirt sophomore had just one great season at DE. He totaled 12 sacks in his lone full season as starter. Although many people felt he could have used some polishing before making the jump, Maybin quickly bolted to the NFL. After only two short years in the league, the once-thought franchise defensive end has been released by the Buffalo Bills, and is now beginning his next stint with the New York Jets.

And that tale is sadly one of many… Heard of David Terrell, Willie Middlebrooks, Jamar Fletcher, T.J. Duckett, William Green, Jarvis Moss, or Jamarcus Russell lately?

The most interesting thing about the future of underclassmen is the newly imposed rookie wage scale. Some of these players leave college early to earn a paycheck, which is fine. With the new scale in place, first round picks, particularly top 10 picks will take far less money than before. Cam Newton’s contract (four years, 22 mil) is only worth 29% of what Sam Bradford’s contract is worth (six years, 78 mil). Ryan Matthews, 12th overall pick in 2010 has 5 year $27 million contract while this year’s 12th overall pick, Christian Ponder is set to make only $11 million over four years.

Will the reduced money scare away some juniors from the draft? It might.

The above report shows that the extra year of college football can significantly prolong the professional career of a player. Perhaps the decrease in money will make underclassmen more hesitant to leave college for the NFL early.

But one thing is for sure, time will certainly tell.