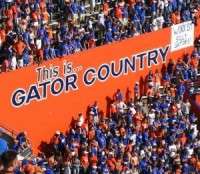 “Over the summer, we conducted an extensive, randomized survey of current and former season ticket-holders, as well as met with focus groups throughout the state. Many of you have expressed concern that Gator Boosters and the UAA have not been in tune to the issues facing our loyal fan base, and we have heard you. Based on this feedback, we began developing a plan this fall to address those concerns. Now, before we mail 2014 Gator football season ticket information in December, we want to make you aware of those major changes that we are implementing for our Gator Booster membership.”

The major news here is that there will be no increases in booster contribution levels for at least three years. In addition, payment plans can now be extended from four payments to six.

Desperate move by an athletic department with a 4-4 football team or proactive business move that will shore up the future?

I think it’s the latter. A great misconception about college athletics is that television money is the largest source of revenue for an athletic department. Wrong. It’s contributions.

Based on contributions alone, Florida ranked second among public FBS schools to Texas A&M, which reported $53.4 million. However, due to the accounting differences from school to school, a better comparison is the revenue reported by schools for both ticket sales and contributions. Florida ($69.7 million) comes in fourth behind Texas ($100 million), Texas A&M ($88.4 million) and Michigan ($80.9 million) under that comparison.

In addition to freezing prices for boosters, Florida is also making other changes to encourage donors to remain loyal. First, some of the ways in which “Loyalty Points” are accrued are being modified. Instead of five priority points for each consecutive year of having football or basketball season tickets, season ticket holders can now earn 10 points for each consecutive year in each sport. In addition, the Gators are retroactively awarding “Loyalty Milestone Bonus Points” for each decade a booster has football or basketball season tickets.

Looking to let your tickets go? There will be a three-month window from January 2014 to March 2014 where boosters can transfer their tickets to anyone, even if they’re not family (which is the current rule). Also, the cost of transferring tickets has been decreased.

Hold on to your tickets, however, and you will be awarded opportunities to attend a football practice in 2014 that is not open to the general public.