Is the BCS Fixed? 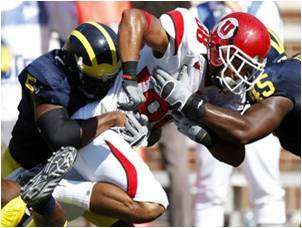 The BCS is fixed.  No, not as in repaired. Playoff PAC, which bills itself as the principal opposition to the BCS system, unveiled a new ad today showing how the BCS is fixed, as in rigged.

Playoff PAC notes that between 91 and 86 percent of BCS revenues are split between the six automatic qualifying (AQ) conferences and Notre Dame in a typical postseason. Perhaps you’re a doubter and those numbers seem implausible?  They come from the 2009-2010 BCS Media Guide.

In the past six seasons, the six AQ conferences took home $521 million more than the other five Division I conferences. Is that because the AQ conferences garner higher television ratings or boast higher attendance? It doesn’t appear that way.  Playoff PAC points out that twice in the past three post-seasons a bowl game featuring a non-AQ conference team posted the second highest ratings.  In 2010, the Boise State – TCU game had an 8.23 share, dwarfing the Iowa-Georgia Tech 6.8 share, and in 2009 the Utah-Alabama came in at a 7.8 share as compared to Virginia Tech and Cincinnati’s 5.4 share.

Although I agree with Playoff PAC’s general argument here, I do feel the need to point out that Boise State and TCU played in the Fiesta Bowl, which creates higher ratings than the Orange Bowl (where Iowa and Georgia Tech played) virtually every year.  And don’t underestimate the ratings power of the SEC in that Alabama-Utah matchup.

Back to Playoff PAC’s point, the system still creates unfair outcomes, as we all know.  One such example involves the 2009 Washington Huskies, who were playing in an AQ conference, and the Utah Utes, who played in a non-AQ conference.  The Huskies suffered a winless year while the Utes completed an undefeated season.   Yet, who brought home the bacon?  The AQ-conference Huskies, of course.

I think it’s clear to everyone except the BCS that a new system is needed.  I wish the Playoff PAC the best of luck with their campaign to open eyes and enrage fans and schools alike.

What’s Next in Conference Realignment?
How Do You Take Down the BCS?