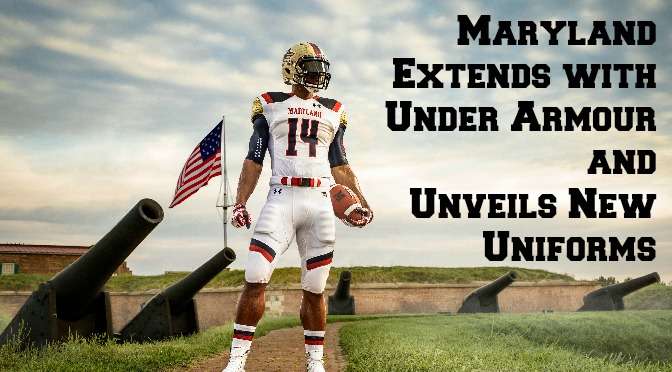 The University of Maryland has extended its relationship with Under Armour for an additional 10 years through 2023-2024. Under Armour founder Kevin Plank is a University of Maryland graduate, so it’s no big surprise for Maryland has re-signed. The previous contract expired last December, but it called for a cash payments of $1.475 million annually and a product allowance of $1.9 million annually. The copy I have also has a handwritten notation by the cash provision that they receive an additional $368,750 per quarter.

Not only was Maryland’s last contract signed five years ago, but its athletics teams have since moved from the ACC to the Big Ten, where Maryland is only the second Under Armour school, joining Northwestern. It’ll be interesting to see what sort of bump Maryland gets with the new contract. Don’t expect Notre Dame money, but they should get a respectable increase.

The announcement of the new contract was accompanied by the unveiling of new “Star Spangled” uniforms for this weekend (see gallery below).

“The University of Maryland is an integral part of Under Armour’s history, culture and identity,” said Matt Mirchin, Executive Vice President, Global Marketing, Under Armour. “We look forward to continuing this remarkable partnership over the next decade and beyond, outfitting the Terrapin student-athletes and fans in the most innovative performance gear in the market.”

This weekend, Maryland football players will sport historically-inspired uniforms paying homage to the 200th anniversary of the Battle of Baltimore at Fort McHenry and the Star Spangled Banner. Sneak peak photos below.