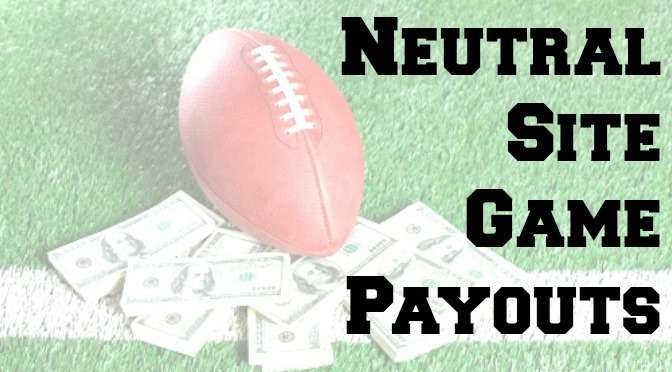 While technically the FBS football season kicked off last night with Abilene Christian at Georgia State, tonight we get some ranked teams and the Chick-Fil-A Kickoff Game!

For the past few years, the college football season has always started with neutral-site games. The two major ones have been the Chick-Fil-A Kickoff Classic (since 2008) and the Cowboys Classic (since 2009). This year there will be two Chick-Fil-A Kickoff games: Ole Miss vs. Boise State (tonight – August 28) and Alabama vs. West Virginia (August 30). There will also be one Cowboys Classic game which pits Florida State against Oklahoma State (August 30).

Neutral site games have proven to be extremely lucrative for the teams participating in them. When teams venture to the Georgia Dome in Atlanta, GA for the Chick-Fil-A Kickoff Classic or AT&T Stadium in Arlington, TX for the Cowboys Classic teams are typically giving up a lot; not only are they missing out on a potential home game, but they also lose all the revenues associated with hosting a home game such as ticket sales and concession sales. In addition, the surrounding area loses out on the revenues it usually makes when thousands of fans and alumni come into town for game day weekend. As such, payouts from these neutral site games have seemingly been enough to persuade teams to miss out on these potential earnings.

In last year’s Chick-Fil-A Kickoff, there was a total team payout to Alabama and Virginia Tech of $5 million. Typically, Alabama makes millions per game at Bryant-Denny Stadium, which seats over 101,000 people. Yet, the allure of being on center stage in a big city, coupled with the generous payouts has made playing in these games worthwhile. Alabama itself has played in 3 Chick-Fil-A Classics and 1 Cowboys Classic to date and is scheduled to play in one of this year’s Chick-Fil-A Classic games and next year’s Cowboys Classic. Furthermore, these games also have the potential to lure in key recruits as future players may be excited by the chance of playing for a big time school in a big time city.

The payout for the Chick-Fil-A Kickoff Classic has increased over the past few years. In 2012, one game has total team payout of $4.2 million, whereas the other game had a total team payout of $4.8 million. This year, the total team payout for the Alabama and West Virginia game is expected to be $6.4 million. However, in 2008 and 2009, the total team payouts were $4.0 million and $4.5 million respectively, and then decreased in 2010 and 2011, to $3.6 million and $3.7 million respectively. Thus, there has not always been an upward trend in determining payouts. To determine the payout, Chick-Fil-A keeps its $5.5 budget and then returns the revenues above the budget to the participating teams.

Numbers for the Cowboys Classic have been more difficult to confirm, but here’s what we do know….

After observing these trends, it is obvious that payouts are varying not only from team-to-team but from year-to-year. One explanation is that the more lucrative and successful teams are being paid more to participate in these games because they help generate more revenue. Another explanation is that the more a team stands to lose in revenue from giving up a home game (i.e. Michigan and Alabama due to their huge stadium capacities), the more these neutral site games are willing to payout. One thing is for certain, though: the neutral-site kickoff game, with its lucrative payouts, will be around for many more years to come.