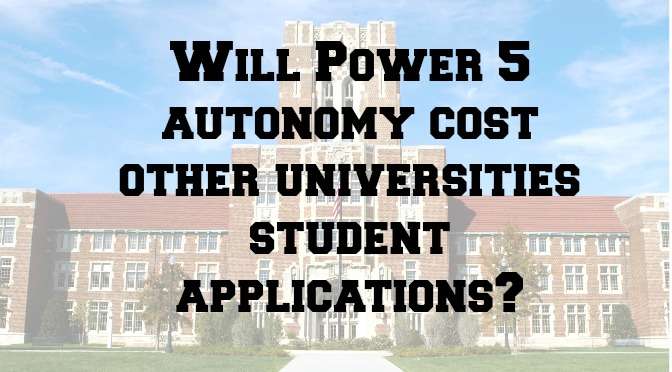 Could autonomy for the Power 5 mean fewer applications to universities in other conferences? Fitch Ratings, a global agency which issues credit ratings to companies (similar to the way Equifax issues you a credit score), indicated in its latest release today that it expects schools with major sports programs who fall outside of the Power 5 to experience a decrease in applications.

Fresno State in the Mountain West is called out specifically as a likely victim. From the Fitch Ratings release:

There is much anecdotal evidence to suggest that success in sports has a positive impact on the number of applications received by colleges and universities. Most schools that enjoy unpredictable success in basketball or football often see a one-year bump up in their applications. In our view, the proposed changes are unlikely to have any effect on the number of applications received by the “Big Five,” as the recognition their sports teams already provide would not change significantly. If these rules were adopted, we would also expect few changes to schools with smaller or less successful sports programs, as they make smaller contributions to their schools’ brands.

However, there could be some modestly negative effect on the number of applications to schools that have successful sports teams but are not included in the “Big Five.” As an example noted in a recent New York Times story, Fresno State is one institution that has invested in and expanded its athletic successes. But it is in the Mountain West Conference and, if the proposal is approved, could lose the publicity it gains from performing well against the best teams.

Indeed, numerous studies have found a correlation between success in football or men’s basketball and new student applications. Most studies focus on the impact of winning a national title or a BCS bowl game, but one study I detailed in my book Saturday Millionaires found mere membership in Division I increased out-of-state applications at a university by 2-4 percent. It wouldn’t be surprising then that membership in the Power 5 might also have an impact.

Here’s an excerpt from Saturday Millionaires on some of the studies that have found a positive correlation between football or men’s basketball success and new student applications:

As was stated previously in the chapter, the Popes study found that in order to achieve the same results, a 2-24 percent adjustment would have to be made to tuition/financial aid.

A new study, released in mid-2012, found a large increase in wins, such as three wins to eight, was followed by a 5 percent increase in applications.

One study showed mere membership in NCAA’s Division I increased the number of out-of-state students at a university by 2-4 percentage points.

Check out Saturday Millionaires for an entire chapter on the intersection of athletics and academics, which details other areas of a university that have been shown to benefit from athletic success.