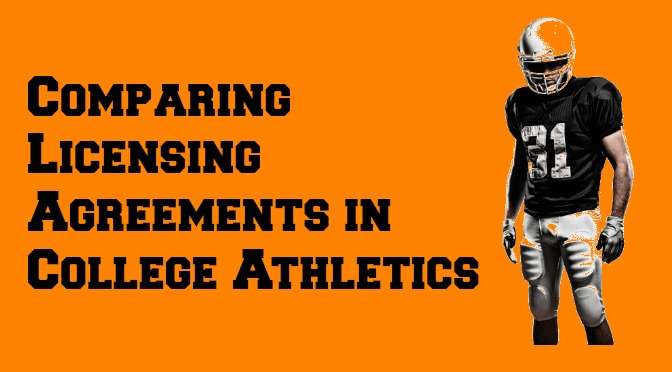 If you follow college sports at all, you probably noticed Tennessee’s move from Adidas to Nike last week. Many of you would probably be surprised to learn the cash value of Tennessee’s new Nike deal is less than the cash received under its Adidas deal. Why, then, would Tennessee make the switch? Is the Vols brand trending downward?

It’s definitely not the latter. Tennessee was ranked #12 in the nation on Collegiate Licensing Company’s last set of rankings. CLC represents over 200 collegiate properties, including the vast majority of schools in the Power Five conferences (although Fermata Partners has made a splash in the marketplace over the past year with the addition of Kentucky, Georgia, Oregon, Miami and, most recently, Notre Dame). At the end of the 2012-2013 fiscal year, Tennessee ranked #15 on CLC’s list, so the brand has, in fact, not degraded.

The answer to the Tennessee question really lies in the differences between Adidas and Nike and their contracts. First, it’s important to understand there are three different types of base compensation in an apparel contract: cash, product and royalties. 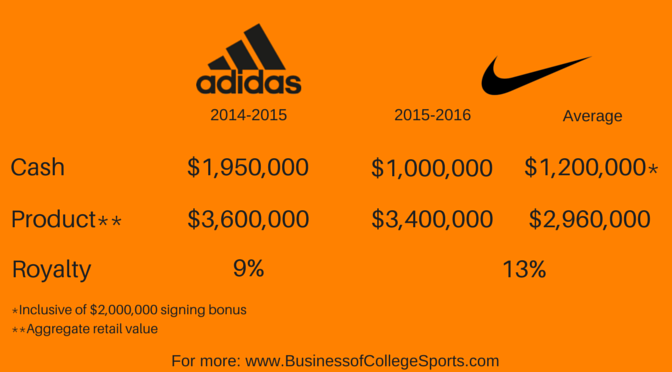 Tennessee did receive a $2 million signing bonus last year, but even with it annualized over the life of the contract, Tennessee is receiving approximately $750,000 less per year on average than under the Adidas deal.

The increase in royalty rate from 9% to 13% will equate to somewhere around $154,000 annually based on an estimate of their royalties from last year. Even if sales stayed flat, that would be a $1.2 million increase over the life of the contract.

Knowing reporters wouldn’t know the difference, Louisville actually wrote in the conversion by hand on their last Adidas contract: 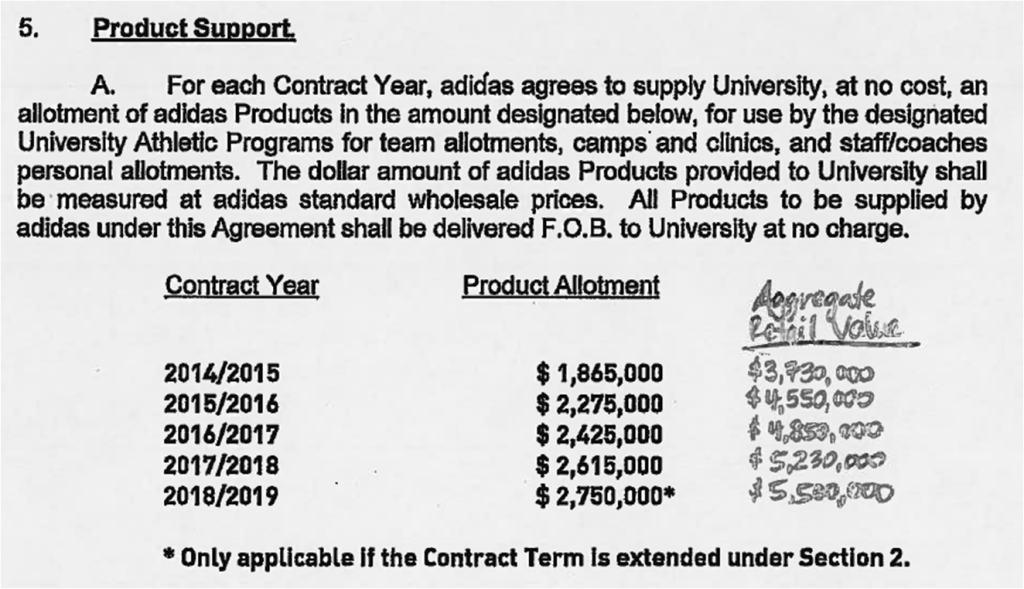 I’ve seen this mistake made a few times with Tennessee’s new Nike contract where it was reported there would be an increase from $1.8 million in product under the Adidas contract to $3.4 million this year under the Nike contract. That’s like comparing apples and oranges. If you convert the Adidas figure to aggregate retail value, you’re looking at $3.6 million versus Nike’s $3.4 million.

Another area where Tennessee’s contracts with Adidas and Nike varied greatly were with regards to bonuses for performance. The existence of these bonuses is pretty typical in these contracts, but they vary widely.

Under the Adidas contract, Tennessee received the following:

Under Tennessee’s new Nike contract, the following bonuses can be earned:

With stiff competition between apparel companies, we’re increasingly see brands throw in little extras to sweeten the deal. For example, Michigan – which, like Tennessee, recently announced it’s leaving Adidas for Nike – will have access to the Jordan Brand “Jumpman” apparel. According to MLive, only four other schools currently have access to Jumpman through their Nike contracts: North Carolina and Georgetown for men’s and women’s basketball and California and Marquette for men’s basketball.

In Tennessee’s new Nike contract, they receive $100,000/year for the athletic department and $100,000 per year for football, men’s basketball and women’s basketball in “Nike Elite” product.

Beyond product, there are other reasons schools choose one apparel company over another. For Notre Dame, at least part of the decision to leave Adidas for Under Armour revolved around Under Armour’s commitment to sports technology and product innovation.

“We’re in a very competitive business where the margins between a 12-win season and an eight-win season are so small,” Notre Dame athletic director Jack Swarbrick said. “Mining the data is one of the next frontiers, and given that this deal is 10 years, we better be focused on those things.”

Fox Sports writer Teddy Mitrosilis pointed to Under Armour’s purchase of MapMyFitness – an app that tracks how hard and efficiently someone is working out – as an example of some of the sports technology Under Armour is using to assist its partners.

Notre Dame’s Under Armour deal also has another interesting feature: an option to take a portion of the cash in Under Armour stock. Under Armour’s stock rose about 3% following the initial announcement of the partnership in January 2014, and it remains at the same share price today (~$85/share). Earlier this year it was also reported Under Armour surpassed Adidas in market share in the United States, so this could be an interesting option for Notre Dame.

Just some food for thought the next time you see a new apparel deal announced in college athletics….