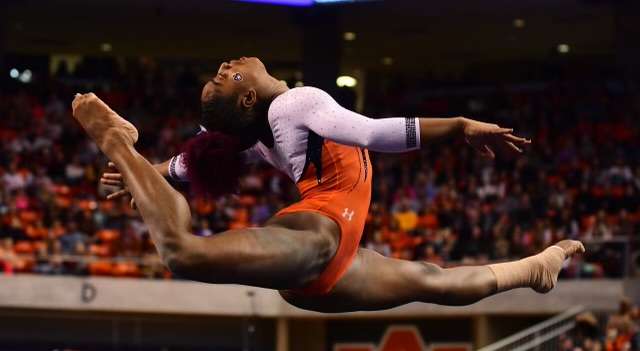 “I am excited to launch my Black Girl Magic NFT Collection on the Legacy League platform. Not only do their values align with mine, there is no better time do it.” said Gobourne in reference to Black History Month. “It’s time to celebrate, congratulate and pay honor and tribute to all of my sisters who have given so much to this sport and I want the world to see them.”

Gobourne was a guest on my Game Face podcast, where she opened up about how personal this NIL deal is for her.

“Ever since I was a young girl, I didn’t see a lot of people that look like me in the sport of gymnastics. So, it’s really important for me, and for other black gymnasts and little girls and even older women, to see that there are people that look like you. I just want to get that out. And I just think that that would be a dream come true to a lot of little girls. My younger me would really love that.”

Asked to define “black girl magic,” Gobourne said it’s all about embodying who you are.

“Black girl magic is just stepping into who you are, and not letting anybody tell you that you need to look like this to be successful. You need to do it this this way. Just stepping in to who you are. Yes, I am different, and I love that. That’s what makes me stand out.”

Her series will also feature other black female gymnasts, including Ananda Brown, Jada Glen and Aria Brusch from Auburn, Hannah Joyner from Rutgers, Amari Celestine from Missouri, Sekai Wright from UCLA and Kyla Bryant from Stanford.

“I reached out to a couple of girls that I know in college—black athletes—like some of my teammates, and then I know that I’m friends with some people in Florida, and just different SEC teams and other teams as well,” said Gobourne. “And we kind of just came together because we all have like similar stories, and it was just a great opportunity for all of us. I also wanted to give other black athletes an opportunity to do NIL deals and just give them opportunity to spread their light and their story.”

Gobourne said it was important for her to include other black gymnasts.

“It’s just very comforting knowing that I have so many other beautiful black gymnasts backing me up. We all have very similar stories and similar paths, and I just think it’s great to have other girls to lean back on.”

“I want other people that look like me to have opportunities. I feel like that was really my main point in really doing all of this and kind of collabing was just to get them out there too. I want them to be heard. I want them to be seen.”

“The NIL ecosystem has created an opportunity, not just for athletes to monetize their name, image, and likeness, but it has created a vehicle for student-athletes of color to diversify their portfolios and create streams of income past their collegiate careers,” said Gobourne’s agent Ed James, managing partner of Booked and Busy Talent. “Due to institutional inequities many Black and Brown scholar athletes, even the ones on full scholarship, often feel pressured to take out loans to send money back home to their family members who are depending on them. We worked to create Black Girl Magic to bring parity, visibility, and economic justice to a group of young ladies who are becoming the CEOs of their own empires one NFT at a time.”

Kurt Hallead, co-founder of Legacy League, said it is a point of emphasis for his brand to align with female athletes like Gobourne.

“At a time when female student athletes lag behind their male counterparts in the NIL ecosystem, we are excited to partner with Derrian. Our collaboration will extend beyond NFTs as Derrian will also serve as our Diversity, Equity, and Inclusion ambassador. In this capacity, she will drive engagement with underrepresented athletes across the country as we continue our mission to help every college athlete leave their legacy in the collegiate sports metaverse.”

Legacy League’s roster of student athletes includes athletes from every Power 5 conference and 50 universities, including HBCUs. In total, Legacy League’s athletes compete in 15 different sports from football to gymnastics, with female athletes accounting for more than 25% of its lineup.

The “Black Girl Magic” NFT collection will launch with Legacy League in the coming months, although a specific date has not yet been set.

You can also listen to Derrian talk about this NIL deal and why it’s so personal to her on my Game Face podcast with Linktree. The podcast is available below or on your favorite podcast platform.