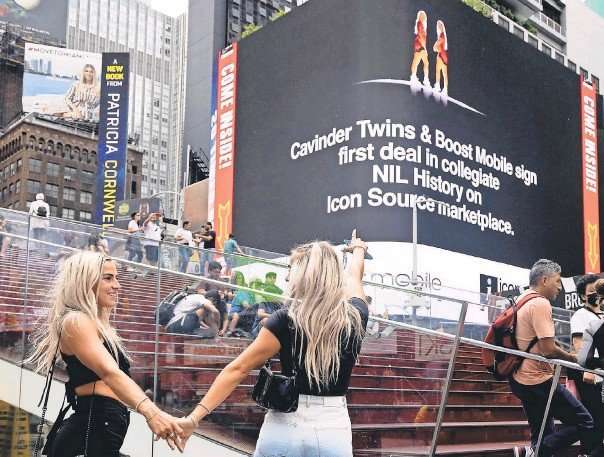 Boost Mobile became the first mobile carrier to sponsor college athletes directly when it announced the signing of college basketball players Hanna and Haley Cavinder on July 1, 2021. The company has since expanded the scope of its sponsorship program to include over 150 student athletes across the country, participating in a wide number of sports, due to the positive results it saw from working with college athletes both in terms of increased social engagement and sales boosts tied to in-person appearances.

In total, 317 posts were made on Instagram during that time period, both directly from the athletes’ accounts and from Boost Mobile’s account featuring influencers. The company shared stats for its biggest players’ top posts on their own accounts:

In addition to working with college athletes on social promotions, Boost also hosted six player meet-and-greets at Boost Mobile locations in key markets. Gonzaga men’s basketball athlete Drew Timme participated in a giveaway during the holiday season in Spokane, Washington where family’s could come into a store and receive a $25 off voucher for a Butterball Turkey. Boost says the goal of the campaign was to spread good will and a positive brand image for the company and for Timme.

The event location ranked #1 in the market during the month of November with a 54% month-over-month increase in sales and a 79% year-over-year increase. Digitally, a local marketing Facebook post for the event drove 6,564 impressions, 143 clicks, 21 shares and 38 positive interactions. Timme’s amplification post on Instagram drove 1,656 views and 34 comments.

UCLA quarterback Chase Griffin also participated in a local appearance during the 2021 holiday season. Griffin joined Santa for free pictures and to help pass out gifts to kids who attended, each of whom received an autographed Chase Griffin Boost Mobile Player Card and a limited-edition t-shirt inspired by Griffin’s clothing brand BE11IEVE.

The event day at the Los Angeles location was the top-selling day for December 2021 and represented an 11% increase in sales month-over-month. The local marketing Facebook post received 3,386 impressions, 36 clicks, 21 shares and 48 positive interactions. Griffin’s amplification post on Instagram garnered another 1,522 views.

“Having these local heroes visit a Boost store near campus can increase sales in that location by almost 200%,” said Boost Mobile CEO Steven Stokols. “In addition, social posts and awareness driven by our college athletes have increased sales in local college markets where they play.”

He says the athletes themselves have also exceeded his expectations.

“We’ve been blown away by their creativity and ambition at finding ways to not only help Boost but also make a difference in their communities, which has been the most rewarding part of this program.”

Boost’s NIL program has been built around the company’s underdog mentality, which extends to the athletes it chose to work with initially.

“We look for athletes that share the same ethos as Boost. Boost is a challenger brand looking to take on the big wireless incumbents and we like athletes who share that underdog mentality,” said Stokols. “We were the first to embrace NIL, signing the Cavinder Twins because of the underdog journey they endured as undersized basketball players. We were drawn to their story as it is Boost’s as well.”

Stokols says many athletes have reached out to Boost inquiring about opportunities to work with the brand, and they continue to sign on new athletes who live in markets where Boost stores are prevalent. However, Boost is also looking more specifically for athletes who are already customers.

“Many of our athletes have been longtime customers and already have an affinity for our brand. We care more about authenticity than notoriety. We have seen some of our more nationally recognized athletes actually deliver less than the local heroes who are more engaged.”

“Student athletes also have school on top of their sports requirements, so we have to be mindful of their time. Finally, unlike professionals, student athletes can be more authentic. We see Boost athletes wearing Boost gear unsolicited because they like the brand versus some pros that are more formal or managed.”

The scope of Boost’s program ranges across a variety of sports, including basketball, football, baseball, wrestling, and track. It also crosses the country with schools including Fresno State, Georgia, Tennessee, Florida and Gonzaga, as well as 38 athletes from 17 Historically Black Colleges and Universities including Alabama State, Southern University, Tennessee State University and Prairie View A&M University who will be featured in a social campaign showing the support for HBCU athletes.

Collectively, the overall influencer program has an aggregate following of 37 million with NIL athletes representing 50 percent of the talent base.

Game Face Podcast: The No-Fear Strategy with NIL
LEARFIELD and RECUR Partner to Bring NFT Opportunities to Colleges and Athletes