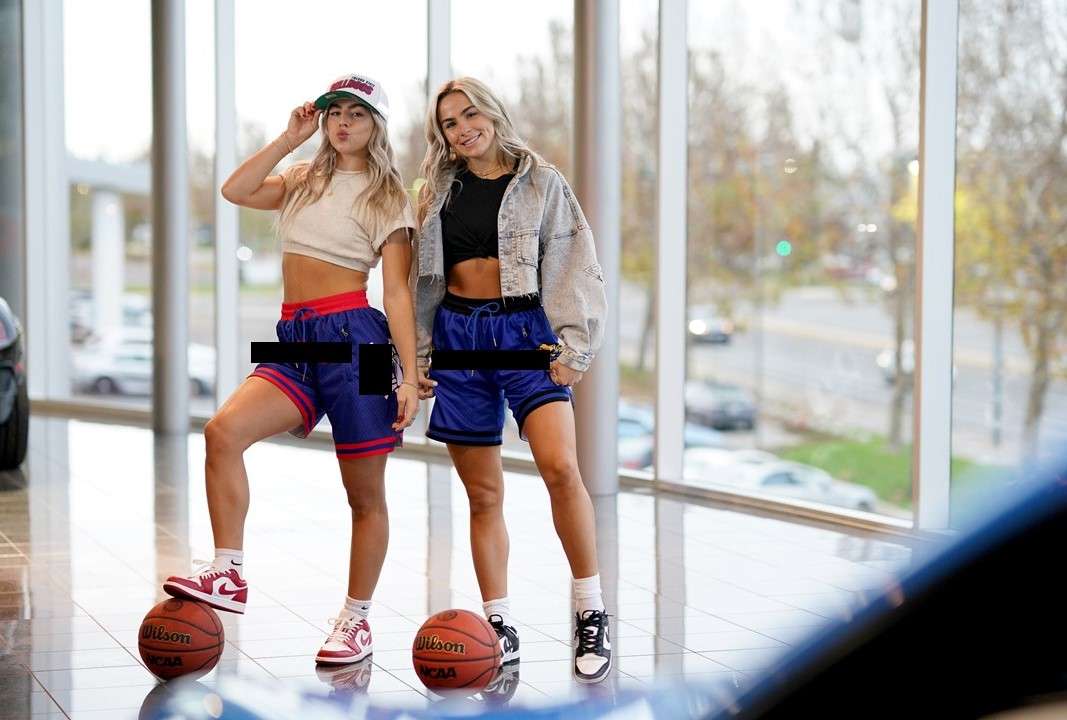 Haley and Hanna Cavinder have been some of the most successful college athletes when it comes to name, image and likeness deals. They were the first college athletes to sign a deal on July 1 through Icon Source with Boost Mobile and appeared on a billboard in Times Square. Since then, they’ve announced a steady stream of partnerships with deals ranging from sports and nutrition companies like Six Star Nutrition to fantasy sports app Sleeper, Champs and Eastbay and even WWE.

Today, they’re announcing a deal with bigger stakes. They’ve co-founded a new streetwear clothing company called Baseline Team with Fresno State alums David Vartanian and Mehdi Brahim, who met running cross country together in college. The company’s main focus right now is basketball shorts. Vartanian describes the style as a throwback to the double mesh basketball shorts of the 90s, with the addition of gold zippers and longer drawstrings with gold tips.

This isn’t just another NIL deal for the twins, this one allows them to really step into a more entrepreneurial role. The twins will own 25 percent of the company, the largest share behind Vartanian and Brahim. They’ll also have one of the three seats on the board of directors in what is believed to be an NIL first.

“We gave them 25% of the company for a couple of reasons,” explained Vartanian. “One, because of their following, because of who they are and what they represent. And then we also added a board seat. Now it’s a pre-launch company, so you might say what’s the board seat? But, I think the board seat is important because it gives more weight and element to this for them. There are three board seats, and they have one of them.”

Vartanian says based on their contract, the Cavinders can decide which of them sits in the board seat.

“I just think that this is revolutionary from an NIL perspective,” said Vartanian. “And, I don’t have daughters, but if I did, I’d say this is revolutionary for my daughter’s generation in the sense that female student athletes are getting an equity deal and a board seat, and that’s a big deal. That changes the game, because some of these other [NIL] deals did equity, but did you get them a board seat? Do they have a meaningful voice at the table? And you know, the answer to that is absolutely not.”

There’s hope this deal gives other athletes the confidence to ask for more meaningful equity or even board seats and other opportunities to have a voice within companies.

“It shifts the mindset from what I call the ‘vending machine transaction,’ of here’s $10,000 to make a post and we get all the upside of it as a company, but good luck with your 10k,” said Vartanian. “Maybe you should be asking for stock. Maybe you want meaningful shares.”

Vartanian might not have daughters, but he does have a grandmother who inspired him to work with the Cavinder twins.

“My 86-year-old grandmother, who knows everything about every Fresno State men’s and women’s basketball and football player, told me about the Cavinder twins. I had no idea what who they were. I’m not really on social media, right? I’ve got way too much going on. So, she was describing some of the business deals they were doing, and then I was interested. I decided I was just going to message their agent.”

The twins’ management, ESM, told Vartanian they weren’t necessarily interested in a one-off deal. That’s when everyone started talking about giving the Cavinders a more meaningful role in the company. Vartanian got sample shorts to the twins, and once they were able to say they enthusiastically liked the product, the deal was on its way to being done.

“The notion of a board seat, plus the equity component, is really unique,” said Dan Everett, founder and president of Everett Sports Marketing. “The fact that they own the licenses as part of the partnership while being student athletes, all of that across the board, that’s never happened in NIL.”

Haley Cavinder says she and her sister are excited to be co-founders in this venture.

“Hanna and I come from an extremely competitive family. We are driven to be successful, whether that’s basketball, school or just life. We see that same competitiveness in Baseline. Starting a brand from square one, growing it through hard work and showing our audience our off-court passion for style through basketball. That’s what attracted us to becoming co-founders of a company that showcases who we are.”

“This is an extremely exciting and groundbreaking opportunity that provides Hanna and Haley Cavinder with an equity position in an apparel company, which provides the Cavinder Twins with higher upside than any other athletes who have entered into name, image, and likeness deals to date,” said attorney Darren Heitner, who provided counsel on this deal. “As co-founding members with creative direction and input on new products, the Cavinder Twins will play a meaningful role in the startup’s development and take true ownership in the opportunity that goes well beyond merely receiving a royalty or guaranteed payment in exchange for their involvement.”

Although it’s groundbreaking, it’s not without it’s challenges. Navigating the intellectual property piece of doing this NIL deal has been complex in part because it is a first.

Although Baseline and the Cavinder twins, as co-owners, have licensed the intellectual property for a number of universities for use on its signature shorts, the twins themselves cannot promote the shorts themselves without blacking out the logos because of their status as student athletes.

“Even though Haley and Hanna are owners of the company, and even though we’ve properly secured and paid for the licensing through [Collegiate Licensing Company], we would need to pay an additional fee to Bulldog Sports Properties while the twins are student athletes.”

Vartanian says his company wouldn’t be running into the same issue if the twins weren’t current student athletes. Any other student at the school would be able to promote their own company after acquiring the proper licenses.

Baseline has the same problem when it comes to universities other than Fresno State featured on its shorts, so it has decided to black box the photos and add a disclaimer to its website that reads, “Due to current NIL policy, student athletes are not allowed to wear university logos even on behalf of companies they own and have licensing rights to (thus we have blocked out all logos to meet compliance.”

“The barriers and obstacles that we were facing with the NIL rules created an opportunity to build a marketing campaign around them reminiscent of what Nike did with the Jordan 1’s that were being considered banned by the NBA for its nonconformity to the current policy at that time,” said Brahim referring to the ad campaign Nike ran after the NBA began fining Michael Jordan $5,000 every time he wore the shoes, which violated their color policy.

The NCAA rules on name, image and likeness leave intellectual property issues up to individual institutions. Some state laws touch on the matter, while others do not. To this point, institutions have handled it in varying manners, with some creating a formal process student athletes can go through in order to use the athletic department or university’s intellectual property, like trademarks and logos—albeit, sometimes at a high fee—and others forbidding it, at least for now.

“We had to go through compliance and make sure if we did this creatively that we wouldn’t jeopardize their eligibility, and we got confirmation on that,” said Everett. There’s a lot of making sure from a business standpoint that we don’t create issues for the twins as a whole at the same time while they’re trying to monetize.”

The Cavinder twins’ situation is somewhat unique in that they are looking to use the intellectual property of not just their own institution but other institutions as well, all while being active student athletes. It’s a problem other student athletes could face as they found companies that may create merchandise beyond their own institution. It’s a new wrinkle for universities, states and the NCAA to consider as legislation is amended or newly enacted.