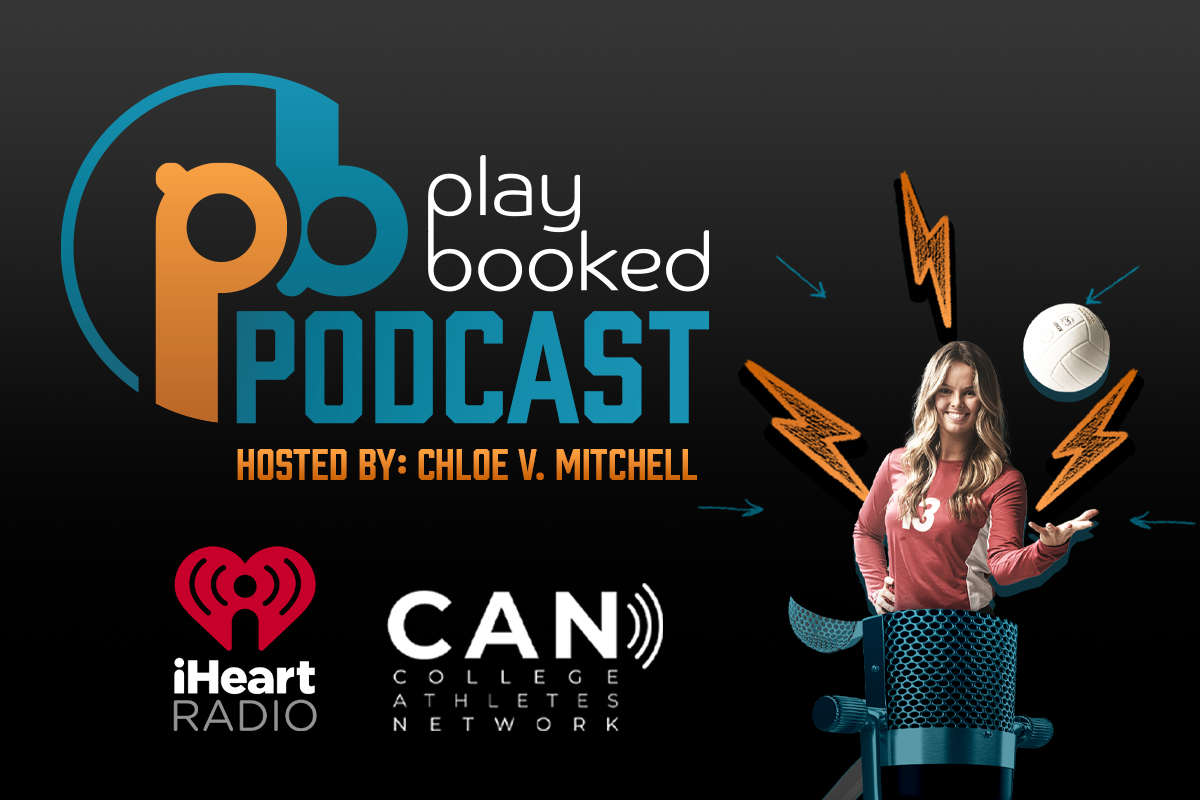 Chloe V. Mitchell was the first college athlete to monetize her name, image and likeness after the NAIA changed its NIL rules in 2020. Now, she’s the second college athlete to launch a podcast on the new College Athletes Network distributed by the iHeartPodcast Network, the PlayBooked Podcast.

Mitchell, 20, is a collegiate volleyball player at Aquinas College and an already successful businesswoman. A nationally renowned TikTok influencer with 2.7 million followers, Chloe has worked with multiple national brands, including Target, Ford, Walmart and Bubly. After pioneering the trail for others, she partnered with her father—a former football player at University of Michigan—and co-founded the PlayBooked App, to help student-athletes do the same.

I had the pleasure to interview Mitchell as my first guest on the Game Face podcast with Linktree. She’s an impressive young woman who has been taking advantage of NIL to not only monetize her own personal brand but also to learn and grow as an entrepreneur. Her podcast will allow her to add valuable broadcasting skills to her already impressive resume while also giving other college athletes a platform to share their brands. No doubt, it will be a rich resource for other athletes beginning their own NIL journeys.

Mitchell has combed the collegiate landscape to find fellow athlete-preneurs with whom she can connect, collaborate, champion, and conquer the chal­lenges they all experience while navigating the new NIL landscape. In each episode, she dives into each of her guests’ experiences so she can provide her listeners with a real-life tactical playbook for NIL success.

“I am consistently impressed by the incredible capability and ingenuity of student-athletes!” Mitchell says of her podcast guests. “It’s exciting to see this bright community of young athlete-preneurs emerge and promising to learn about the wide variety of creativity and ambition in the NIL space.”

“My takeaway after interviewing so many talented college athletes, is that there is no one-size-fits-all template for how to leverage your NIL and make money as a student athlete,” shares Mitchell, who is an admitted outlier in the space. “It’s about, #1, finding trusted partners like the PlayBooked app to walk you through it and, #2, deciding how much time and effort you can and will invest. There are many ways to do that, for athletes of all levels, and listeners can be a fly on the wall as my show guests share details about their own avenues of revenue and creativity.”

Check out our tracker of college athlete-hosted podcasts

April 13 – “WalkieTalkieZ,” hosted by Noah Buono. A podcast focused on walk-ons from a variety of major sports programs across the country. Buono is a walk-on basketball player at Duquesne University who has been a walk-on for two different Division I programs.

May 12 – “PlayBooked,” hosted by Chloe V. Mitchell. A podcast focused on the world of NIL. Chloe has close to three million followers on social media and back in the Summer of 2020 became the first college athlete to make money off of her name, image and likeness. She will interview fellow college athletes as they go over strategies to navigate the NIL marketplace including which companies are best to work with; how to reach out; what to say on social media; and of course, how to keep the money coming in with new deals.

June 9 – “The Birdie Bunch,” hosted by Kennedy Swann. A podcast focused on Swann’s college golf journey and bridging to her attempt to make it on the LPGA Tour. Swann recently won a National Title at Ole Miss in 2021, but before that she became the first ever college athlete to enter the transfer portal. She will focus on what it takes to get recruited; dealing with a coaching change; the differences between college and junior golf; and the pros and cons of the daily grind once you turn professional.

July 2022 – “Out of Bounds,” hosted by Mackenzie and Mason Forbes. This brother and sister combo are basketball players at Harvard. They come from a basketball rich family, both their grandfather and father played for the Harlem Globetrotters. Their podcast will focus on life inside the arena and the social issues that many college athletes face on campuses across the nation.

August 2022 – “Beyond the Megaphone with Cassidy and Nathan,” hosted by Cassidy Cerny and Nathan Paris. This University of Indiana cheerleading duo became insta famous during March Madness when Paris lifted Cerny up on his shoulders and Cerny knocked loose a stuck ball at the top of the backboard. While that was a great moment, these two have a lot to share about the world of cheerleading for a major program. Their podcast will focus on the behind-the-scenes performance preparation; differences between college cheerleading and competitive cheer; what cheerleaders are really talking about as the game is going on; and of course, some incredible road trip stories.

September 2022 – “Betting on Yourself,” hosted by Terry Wilson. Wilson has seen it all when it comes to playing big time college football. He played quarterback at four schools in six years. His podcast will focus on this unbelievable journey that saw him lose a battle to Justin Herbert at Oregon; a stopover in the middle of nowhere Kansas to play Juco ball and become a Netflix villain; playing hero for an SEC school; suffering a major injury and fighting back; and now the buildup to the biggest moment in his life, the NFL Draft.

October 2022 – “ The Frugal Athlete,” hosted by Amobi Okugu. Okugu is a former UCLA soccer player who was named the PAC 10 Freshmen of the Year before getting drafted into Major League Soccer. He played nine years of professional soccer before retiring. This podcast will provide an insider’s look into the financial playbooks of athletes, give insight to what it means to be a frugal athlete and discuss topics with guests that focus on sports business.

The entire slate of podcasts will be distributed by the iHeartPodcast Network and will be available on iHeartRadio and everywhere podcasts are heard.