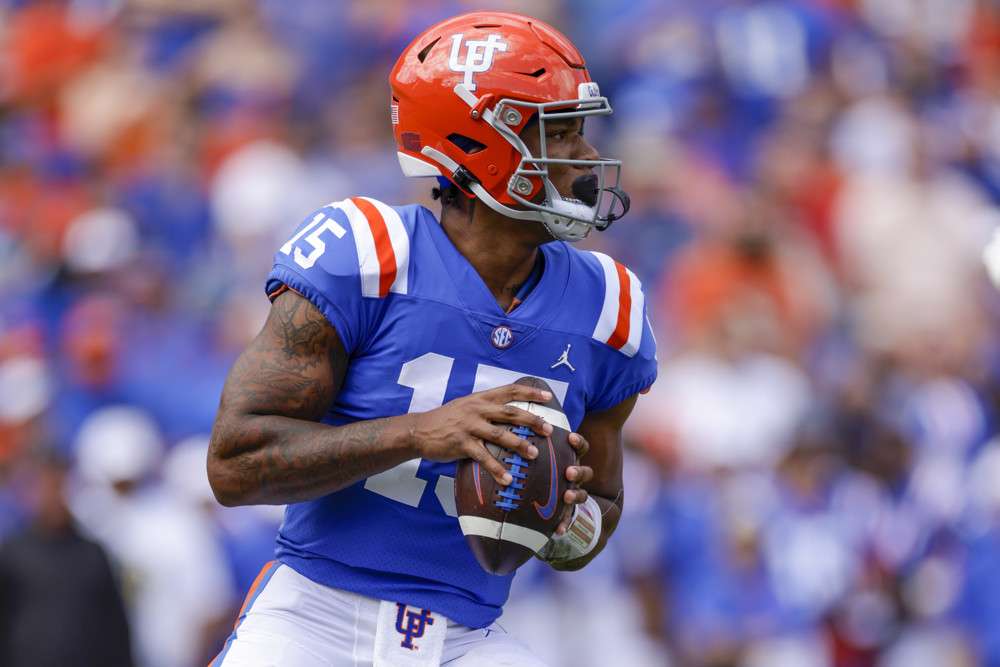 University of Florida redshirt freshman quarterback Anthony Richardson is proving that you don’t have to be the starter to attract sizable name, image and likeness deals. He recently signed with attorney Darren Heitner (a former Forbes contributor) and Deiric Jackson to pursue NIL opportunities, and they’ve decided on a strategy that focuses on quality over quantity.

The team says they’ve already landed a mid six-figure deal, all guaranteed cash with the potential of earning additional compensation based on specific benchmarks that are not based on athletic performance.

“We’re going to take a very different approach than many in this space,” said Heitner. “Maybe three to five deals in total, six-figure or seven-figure deals. We want to make sure he’s associating with strong companies and being properly valued.”

Asked about his thoughts on NIL, Richardson said he’s embracing the opportunity to generate income for himself and his family.

“It’s a blessing for us to be able to make money. It teaches us how to manage money and understand the business aspect of things. It also allows us to help our families in ways that we couldn’t before.”

What’s the market like for a guy like Richardson who isn’t the starter but is still getting some time in every game? Heitner says there are challenges on his end but enormous upside potential for brands.

“Admittedly, it’s not that easy, but there is some leverage. Someone in the position of Richardson or Quinn Ewers or Caleb Williams have leverage because this won’t be the last year they’re competing in college sports. There’s a guarantee they’re going to be here for at least one more year or two more years in college before going pro. Companies realize that and understand that they will have more time to exploit the relationship while the athlete is in school and perhaps renegotiate a deal later on.”

In agreeing to fewer deals, Heitner also says both the student athlete and the brand are better off.

“Some brands just want to pay a small sum of money for a one-off, but that can do both the athlete and the brand an injustice. It can oversaturate the athlete and show a lack of authenticity because the athlete is just jumping at any relationship and then they have a lesser effect on the target market, and that hurts the brand.”

Several starting quarterbacks have seen their seasons shortened by injury or haven’t lived up to expectations on the field. Although NIL deals can’t be contingent on a student athlete’s on-field performance, some brands are obviously choosing student athletes based on their audience and exposure. With Richardson not being a starter, Heitner’s had to field questions about his potential on the field.

“There were questions surrounding why he wasn’t participating in certain games. Obviously, it’s been revealed that he suffered an injury, and Dan Mullen just wanted to take his time in ensuring that he was fully recovered before he came back. But the question is, will he be the starting quarterback for UF before this season is over? I have to be candid and truthful and say, ‘I don’t know that. I can tell you that he is a future leader on this team and the fanbase is fully behind him.’”

Longer term deals ensure brands get the exposure they’re looking for because Richardson is getting playing time in every game, and he’s been in on some big plays. He’s also expected to be named the starter in the future, possibly even later this season.

Generally speaking about football student athletes whose on-field performance hasn’t been as expected, or who have seen injuries shorten their season, Heitner says brands aren’t necessarily losing out.

“Brands have gotten a lot of value just from the fact that they’re involved in this space in general. There was a lot of coverage surrounding these prominent athletes signing the deals, and so there’s an argument to be made that they already received a strong return on investment just surrounding the signing of the deals themselves. These are recognizable individuals, whether they’re injured or starting or not, due to the sheer fact that we’re even talking about them now.”

“Even though someone like D’Eriq King may be injured, he’s still very recognizable in the South Florida market. Perhaps not necessarily nationally, but those local regional brands, I’m sure, can still take advantage of an association. Spencer Rattler has that national cache. If a brand decided to do a deal with Spencer Rattler right now, even after there’s questions as to whether he’ll ever start again for Oklahoma, you better believe everybody will cover that deal.”

Heitner says he doesn’t think we will see many brands get cold feet because simply because notable players are getting injured or benched. Particularly for those brands who’ve worked with other types of athletes, it’s simply part of sports.