The shirts are available through Breaking Ts 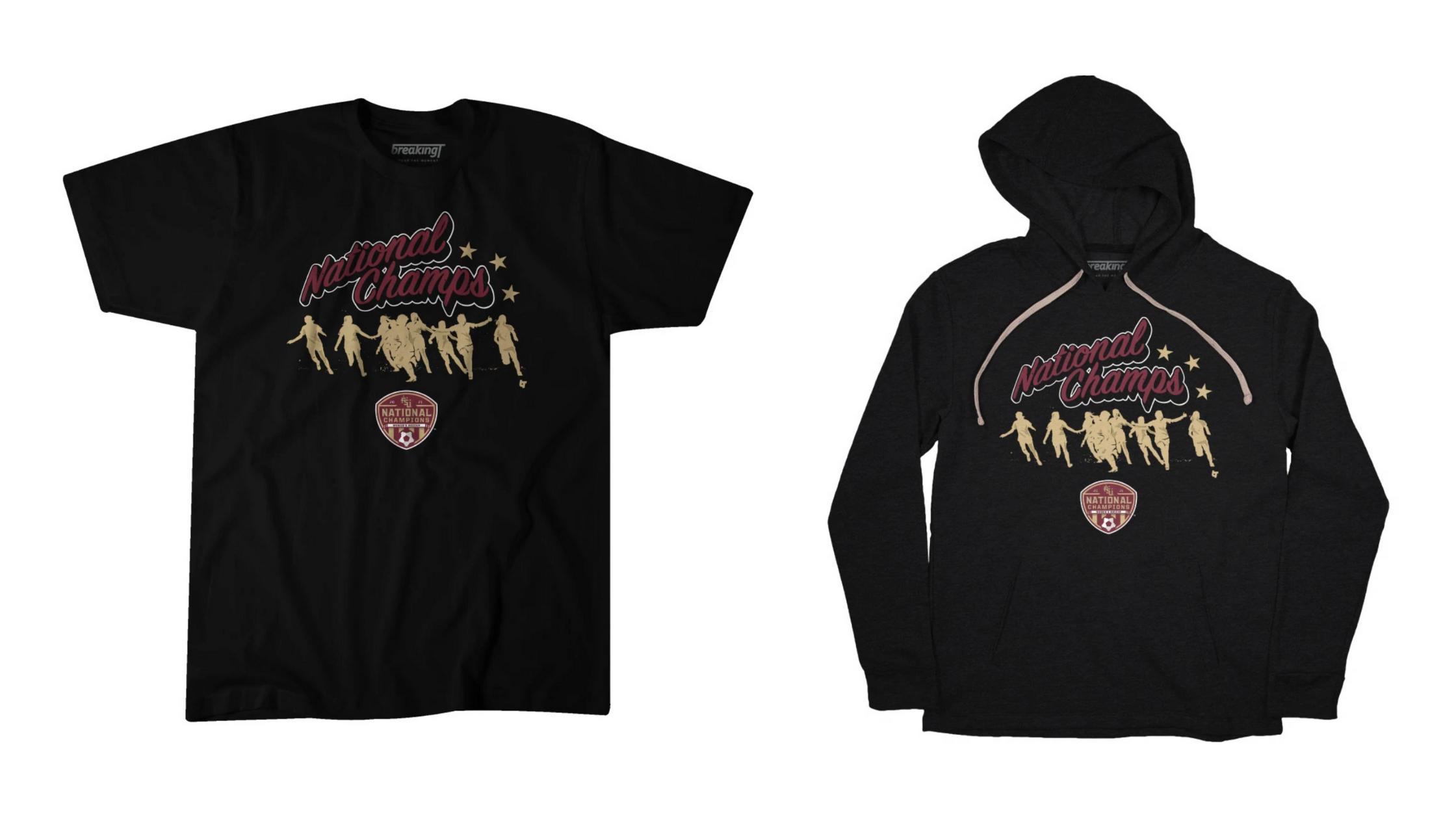 Ever since July, many student athletes across a variety of sports have benefitted from NIL. Whether they inked deals over the summer or gained name recognition during their respective seasons, we’ve seen many different types of agreements between brands and college athletes and teams.

We are perhaps only starting to see the impact winning a national championship can have in the NIL marketplace, however. It seems women’s soccer teams, in particular, are reaping the rewards. Last year’s champion, Santa Clara, received a team-wide deal from ChiliSleep, and now this year’s champion, Florida State, has the distinction of having the first group licensed national championship co-branded piece in the nation.

Last month, the Florida State Seminoles defeated the Brigham Young Cougars in the 2021 NCAA Women’s Soccer Championship to win their third national title in program history. Immediately following Yujie Zhao’s match winning penalty kick, the Seminole players rushed on the field to celebrate, which provided the perfect image for a nice piece of apparel to commemorate the moment and the season.

The silhouette image of the Noles celebrating their title has recently been featured on the first licensed product produced for a NCAA championship team. The image is now available on several apparel items available through Breaking T’s.

Instead of FSU players just walking away with satisfaction of being a champion, they can now be financially compensated through NIL. Because of NIL laws in the state of Florida, and the fact that Florida State approved its official marks to be used in conjunction with NIL, the members of the team will receive payments on every apparel item sold with the silhouette image on it.

When NIL came into effect last summer, schools across the country scrambled to formulate their own strategies and policies that would set their athletic departments up for success. According to The Osceola, Florida State knew that the co-branding was something they wanted to prioritize because of the enhanced opportunity it creates for many student athletes.

As it turned out, the timing was perfect. FSU Soccer’s title run occurred just as the university was rolling out co-branding opportunities. BreakingT, an apparel company that helps fans connect to the players and teams they love by commemorating the best moments in sports with real-time fan apparel and other licensed products, put together this shirt (below) with the aforementioned silhouette on it.

“BreakingT, one of our apparel licensees who specializes in hot market moments, reached out to us the week before the championship and asked if we would permit NIL co-branding within National Championship product,” Katie Pugh, FSU’s Director of Trademark Licensing, told The Osceola. “We realized that it would be the first time that a national championship piece of merchandise could feature the NIL of student athletes and therefore thought that it was the perfect time to begin to allow co-branding of university marks and student-athlete NIL.”

Rising Spear, an FSU based NIL initiative, assisted with the NIL opportunity. Bob Davis, a co-founder of Rising Spear, told The Osceola that the deal was presented to the entire team, and all 19 eligible players signed on. However, some players were unable to take part in the deal as international student athletes.

Check out other university-specific NIL collectives

The FSU women’s soccer team is the first NCAA program to win a national championship in the NIL era, but obviously won’t be the last. Moving forward, individual student athletes who shine on the biggest stage will undoubtedly be in line for NIL deals, but it will be fascinating to see how many schools are willing to opt-in for co-branding initiatives to link the student athletes with their marks and logos.

Because the schools, student athletes, and fans all seem to benefit, it’s a win-win-win for all parties involved. Hopefully, this great story about the Florida State soccer team is far from the last.