Indiana and Wisconsin are among a growing number of athletic departments helping to educate local businesses on NIL. 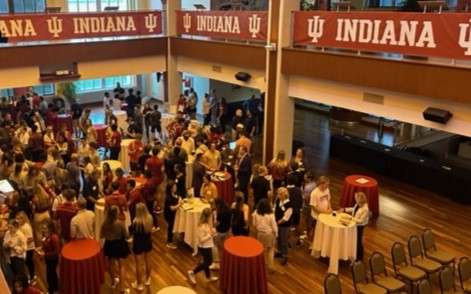 For all the chatter surrounding name, image, and likeness on sports talk radio, football pre-game programs, and social media accounts, it’s easy to forget that at its most basic, an NIL contract involves two parties – a student-athlete and the business entity or non-profit organization funding the transaction.

And often, that business is not a multi-national corporation but a local operation. It’s the successful fast-casual restaurateur who has just opened a new concept; it’s the proprietor of the independent bookstore who has noticed members of the women’s swim team browse her shelves.

Universities are beginning to realize this.

On Monday evening, two Big Ten schools held events hoping to link local businesses with athletes. In Bloomington, Indiana, over 30 businesses set up at cocktail tables inside a cavernous indoor space attached to Memorial Stadium to talk NIL opportunities with a group of Indiana University athletes, many of whom participate in so-called “non-revenue” sports.

IU athletic director Scott Dolson briefly addressed the crowd and said, “It’s hard for us to educate the business community on how it (NIL) works. There are so many questions and that’s what this is about tonight.”

Ashton Gipson oversees catering and events for Finney Hospitality Group, a collection of popular restaurants in Bloomington and Indianapolis. Before the event, called a “mixer,” by the organizers, she said she was there to, “Make a connection with the athletes. From a restaurant perspective, we feed a lot of them,” she joked. “I understand why this is important to these athletes,” Gipson continued. “What can we do as a company to help support their needs?”

Altius Sports Partners advises IU in the NIL space and account executive Carly Tower attended the event and hailed it as one of the first of its kind. “Other schools have done events with local business or donors,” she said, “but to have the athletes present and have it run entirely by athletes and staff is super unique and helps drive the authenticity and the connection to the community.

“For so long businesses were told, ‘You can’t do this, you can’t do that,’ and now it’s rewiring the way everyone is thinking about it and getting used to the new normal and once they get their feet wet, I feel like businesses are really excited for it.”

The gathering was the brainchild of Margo Rogers, an IU diver and president of the Student-Athletic Advisory Committee. She began planning it in May with the help of the IU athletic department and spent the summer getting local businesses on board. As the room filled up Monday with over 100 people on a beautiful late summer evening she said, “I was thinking of how NIL could be used to create meaningful connections with athletes from all sports and see NIL be accessed on all of 24 of our varsity sports and not just the ones you see on TV all the time.”

Serena Bolden is a first-year law student and will compete on the track and field team as a long jumper and triple jumper. This is her first year at IU after transferring from LSU.

Bolden said being able to meet local business owners in person was very helpful to her as opposed to reaching out on Instagram or a Twitter direct message and hoping for a return response. “I feel like on social media you see a lot of big-name athletes doing it and you’re like, ‘I want to go do that,’ but I have no idea where to start,” she said.

Meanwhile at almost the same time in a club area at Kohl Center in Madison, Wisconsin, a panel discussion on NIL was held for local business representatives in advance of the annual student-athlete career fair at the University of Wisconsin.

“I got a lot of good feedback from folks that didn’t know even know the first thing about NIL, what they’ve seen in headlines,” said Brian Mason, the director of NIL for Wisconsin Athletics. “I had a couple of different businesses talk to me about the fact that they walked away from it with an understanding that there is a space for their business to get involved in NIL and they didn’t think that going in. They thought NIL was only for the highest profile athletes and brands with large budgets…I think it was important for business leaders in our community to understand that there really is NIL opportunity at all levels and for all student-athletes and really for any business depending on your marketing goals there is probably an NIL activation that can help you meet those.”

Back in Bloomington, Christopher Grant a graduate student in social work at IU and a sprinter on the track and field team, was taking the room in at the IU NIL mixer.  With his over-21,000 Instagram followers, ever-present smile, and bubbly personality, he should be a natural for NIL. “Tell that to these businesses,” he said with a laugh.

Baiting the Line: Can Professional Sports Leagues or Teams Sign NIL Deals with College Athletes?
Impacting the Next Generation Through NIL