The $1,000 NIL deal is groundbreaking 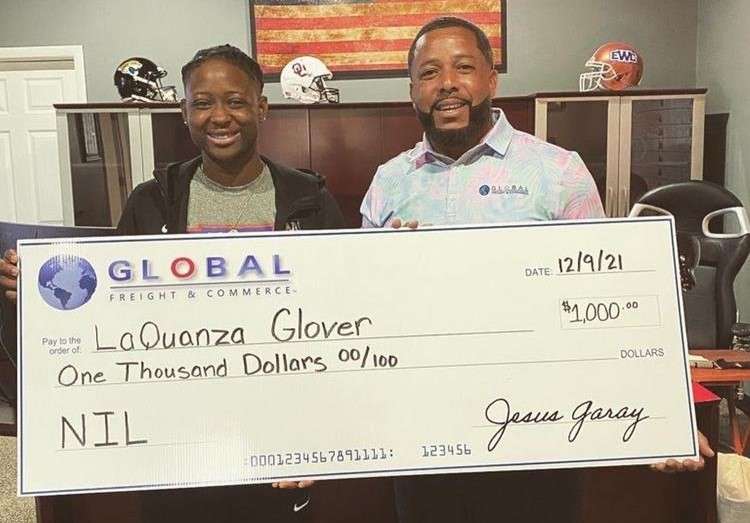 If you’ve been paying attention to college athletics over the past couple of weeks, you probably saw an unprecedented development for Historically Black Colleges and Universities. Despite previously being committed to college football powerhouse Florida State for over 18 months, the number one player in the 2022 class, Travis Hunter, flipped to Jackson State on National Signing Day. It was viewed as one of the most groundbreaking news stories on the recruiting trail ever, and possibly opened the door for elite recruits in the future to strongly consider following in Hunter’s footsteps.

However, while Travis Hunter might be getting all of the headlines and media attention, he isn’t the only student athlete blazing trails for HBCUs right now. La’Quanza Glover, a basketball player for the Edward Waters University women’s basketball team signed an NIL deal with Jacksonville-based Global Freight & Commerce on December 10th that is believed to be the first-of-its-kind for a female HBCU student athlete.

While we’ve seen an abundance of great NIL opportunities for female student athletes across the country, the number of deals for those playing at HBCU institutions hasn’t been as prevalent. But just like Travis Hunter’s decision to spurn a prominent football program, all it takes is one individual to break through and pave the way for others.

Before signing with Global Freight & Commerce, a trucking and logistics company, Glover knew she wanted an NIL opportunity, but didn’t have certainty a deal would come as quickly as it did. “I’m still learning as I go about NIL deals as I go because I didn’t know anything about it before I was offered this opportunity,” Glover told us.

“I’m just happy that I’m the first because when people see me do it, then that opens doors for other people. When people see that I can do it, they’re going to want to do it too.”

Glover says her teammates were excited for her. Both the men’s and women’s basketball teams gathered for the announcement. “It was really nice. Everyone congratulated me. It’s going to open more doors for them. I hope that one of them can be next.”

Why Glover was the right athlete

Jesus Garay, owner and CEO of Global Freight & Commerce told the Jacksonville Business Journal the deal is worth $1,000. Garay proclaims that although Glover is an extremely talented student athlete, the deal is more about the impact she will have on Jacksonville.

“For me, I’m about leadership,” said Garay, an Army veteran who opened Global Freight & Commerce in 2012. “I wanted to pick a good leader. She is currently crafting a message. I’m on several boards around town, and I’m going to have her come out and start speaking.”

“I’m very good basketball player. I have a 3.75 GPA. I’m doing my thing on the court and off the court.”

For Global Freight, Glover will serve as an ambassador with the goal of helping recruit people who want to get their commercial driver’s license.

On NIL, Glover told the Jacksonville Business Journal that “If you get the opportunity, do it,” Glover said. “You never know what other opportunities it may lead to in the future. It can help you business-wise, getting to know more people, which can lead to expanding different outlooks and goals in the future.”

Asked about who she’d love to partner with in the future, Glover told us she saw fellow HBCU student athlete Ky’Wuan Dukes did a deal with Bojangles, and she’d love to work with them too.

“I would say Bojangles or Fanatics. Anybody who’s willing to give me opportunity to sign another NIL deal, I’m gonna just going to be grateful.”

Across the country, studies and reports are showing that the biggest influencers in college athletics are not confined to star quarterbacks in the SEC or best point guards in the Big Ten. They can come from any school, any conference, any division, or any background. Hopefully, more companies recognize this reality and reach out to female student athletes competing at HBCU institutions moving forward. La’Quanza Glover is the first, but should by no means be the last.