Podcasting has become a popular platform for student athletes 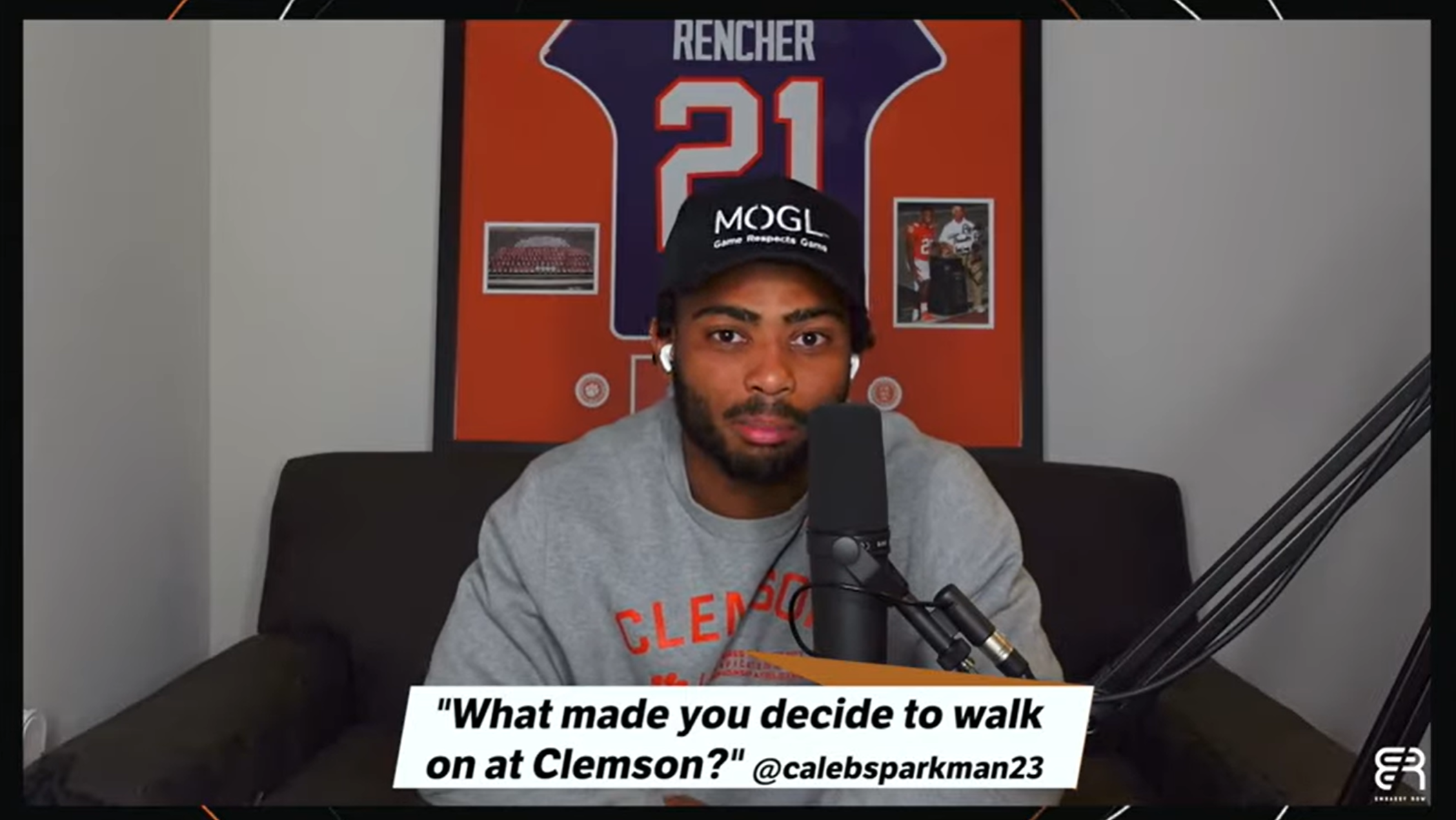 Check out our directory of student athlete podcasts

Architects and athletic departments are even looking into adding more podcast booths inside athletic facilities to assist student athletes in these endeavors thanks to the demand.

The Momentum Podcast with Mo Hasan and Justice Shelton-Mosley

One show that doesn’t need a podcast booth is Momentum from USC quarterback Mo Hasan and his co-host Justice Shelton-Mosley (former Kansas City Chiefs WR). That’s because Momentum is filmed and recorded from inside Hasan’s food truck. It feeds the community by day and transforms into a podcast booth when it’s time to record. The video below has some good shots of the truck at the beginning.

Although more student athletes have been jumping on the opportunity to monetize their name, image and likeness through podcasting, Hasan started Momentum long before NIL laws went into effect.

“To begin with, I’m an avid podcast consumer and cherish the idea of long-form conversations with interesting people,” said Hasan. “Then, during the BLM protests two summers ago, a friend brought up the idea of starting a student-athlete podcast where I can talk to my teammates about the issues that matter most to them.”

Hasan already owned the food truck, which belongs to his nonprofit, Second Spoon. Its first transformation was from FedEx truck to a way to redistribute food waste to those in the community who were going hungry. What started in his hometown of Miami then moved with him to Nashville, where he played for Vanderbilt, and then on to Los Angeles as he moved to play for USC.

It was announced this week Hasan is a semifinalist for the Wuerffel Trophy, the college football award that rewards student athletes who excel in community service.

Now, the truck does double duty, feeding people by day and serving as a traveling podcast recording studio by night.

Most of Hasan’s guests have been teammates and other athletes in Los Angeles. The fun conversations range from college football to dating, but the show isn’t afraid to dig into societal issues.

They’re also not afraid to dig into issues student athletes face. In a recent episode, they discussed how their stipend check from USC recently took a big hit (and was late). They also dug into how some of their teammates are sending that money back home to support their families and about how they think NIL can change the landscape for student athletes.

It’s an interesting conversation to drop in on, although I should note not everything they say is accurate (for example, there is no rule that says a student athlete’s scholarship is nullified if they make more than a specific amount on NIL). Nonetheless, I think it’s a good listen for those who want an inside look at what student athletes are talking about relative to NIL.

I asked Hasan if he’s monetizing the podcast, and he said not yet.

“So far we’ve turned down opportunities to monetize the podcast because we’re eager to continue growing in this early phase. When the time is right we’ll dig deeper into our advertising strategy and which companies we want to work with. I prefer to focus more on the content side where my managers works the deals behind the scenes.”

Asked about his long-term plans for the podcast, Hasan said NIL is opening up more opportunities to monetize the podcast, but he’s also hoping to do more than just make money.

“I started the podcast before I even thought NIL would be a possibility so it’s something that my friends and I enjoy doing regardless on potential income opportunity. With that said, the new legislation changes things now that companies and studios are coming up to us with partnership opportunities. I’m not exactly sure where I see it going in the long term but I’d like this project to inspire future athletes to pursue their passions and widen their pursuits while they’re in school.”

Clemson RB Darien Rencher is the host of The Players Club ’21, presented by Embassy Row and a product of NIL marketplace MOGL. This weekly college football podcast described as a “player-only perspective on what’s going on in college football both on and off the field.”

Rencher says he started the podcast to hone his podcasting/broadcasting skills so that he might leverage those skills after his football playing days are over.

“I think this is something that I see myself doing when I’m finished playing football. I want to get my reps in and develop and hone in on the skill of being able to articulate and speak about the about football and sports in general. I’ve been inspired by people who have a voice in the sports world. It’s something I can see as a profession once I’m done with ball.”

Rencher said he reached out to people who’ve been around the Clemson program who he admires and asked for advice.

“This summer, I got in contact with people that have been close to the program like Maria Taylor, Kirk Herbstreit, Marty Smith, Eric McClain, and EJ Manuel. I asked them what I could do now to get started, or something I could do to fast forward my track, and they said I could start a podcast or start talking about my experience in. You get your reps in, and you get better as you go.”

Listen to Darien on my Game Face podcast with Linktree

Through NIL, Rencher said he was able to partner with Embassy Row, who produces shows such as Good Morning Football, and MOGL, one of the platforms emerging in the NIL space to help student athletes partner with brands.

The idea behind The Players Club ’21 is to bring on players to give fans the inside scoop on what it’s like to play football at the collegiate level.

“I think about the younger version of me, who just wanted to know what it was like to play Division I football, or be inside of a big program or playing at this level, and the things that go through your mind during big time games. Just giving people the inside scoop on what my experience has been and showcasing the experience of other people too.”

Rencher has had college football players from Clemson, Notre Dame, Wisconsin and more as guests. He’s even had ESPN broadcaster Kirk Herbstriet as a guest.

For the college athletes joining the show, Rencher says he’s been able to give them “a little pocket change” thanks to NIL. As far as putting money in his own pocket, Rencher says he’s working on sponsorships for guests that want to be featured on the show. He also sees YouTube as a great potential source of revenue once he reaches 1,000 subscribers (subscribe here to help him).

“I really wasn’t in it for the money. The craziest part is that I was going to start my own podcast out of my own pocket. But it actually worked out to where I can just do what I’m good at. And then there’s people that I’ve got on my team now who edit and produced the show.” He noted how much both Embassy Row and MOGL have helped him bring the podcast to life.

As far as long-term plans for the podcast, Rencher says

“I think the thought process now is to see what happens throughout the season and see what kind of traction it gets. I think it’s definitely trending in the right direction. And then, depending on what the next season my life looks like, will determine what I do with it, but I’ll have EP credits on the on the shelf.”

“So, maybe if it is for me to keep doing this next year and talk ball and let it be another thing I do on the side while I broadcast, or if I get a chance to keep playing and get different job and I want to pass it on to the next. charismatic kid who just wants to use this platform and wants to get into broadcasting–maybe from some school across the country–that could kind of be a thing we could do too. The long-term plan is for me to just get my reps in and see what happens with it.”

The What’sTheWord with D Will Podcast with Donovan Williams

UNLV men’s basketball player Donovan Williams got into podcasting to fill his time during quarantine and decided to focus on commentary around trending topics in the news.

“During the quarantine I was having trouble figuring out what else I was good at besides basketball, because it took up so much time and I wanted to find some more hobbies for myself. I watched podcasts a lot, so I thought it would nice to give it a shot myself.”

Like Hasan, Williams isn’t podcasting purely with money as the ultimate goal.

“I hope to gain pure enjoyment from it; I didn’t start it to make money or to change the world, it’s really something for me to look at my life and say outside of basketball this is something valuable to me that I take pride in and no one can take that from me.”

His last episode ventured into the mental health of black men, Donald Trump, slavery and more. Although he hasn’t published new episodes recently, he says he’ll be continuing the podcast.

Jones says they too started their podcast during quarantine as a creative outlet.

“My teammate and I started it during quarantine and we made it so that fans could hear what it is like to be a college athlete, hear stories and lessons they learned.”

Jones says they haven’t monetized the podcast yet, but they’re hoping to do so in the future.

As for his long-term plans, he says it’s more about giving a platform to other athletes.

“I hope to make connections with a lot more athletes and give them an outlet to tell their stories.”

Check out our directory of student athlete podcasts and guest series