Student Athletes Can Now Monetize Their Audience Through SMS Texting

Student athletes can monetize their texts 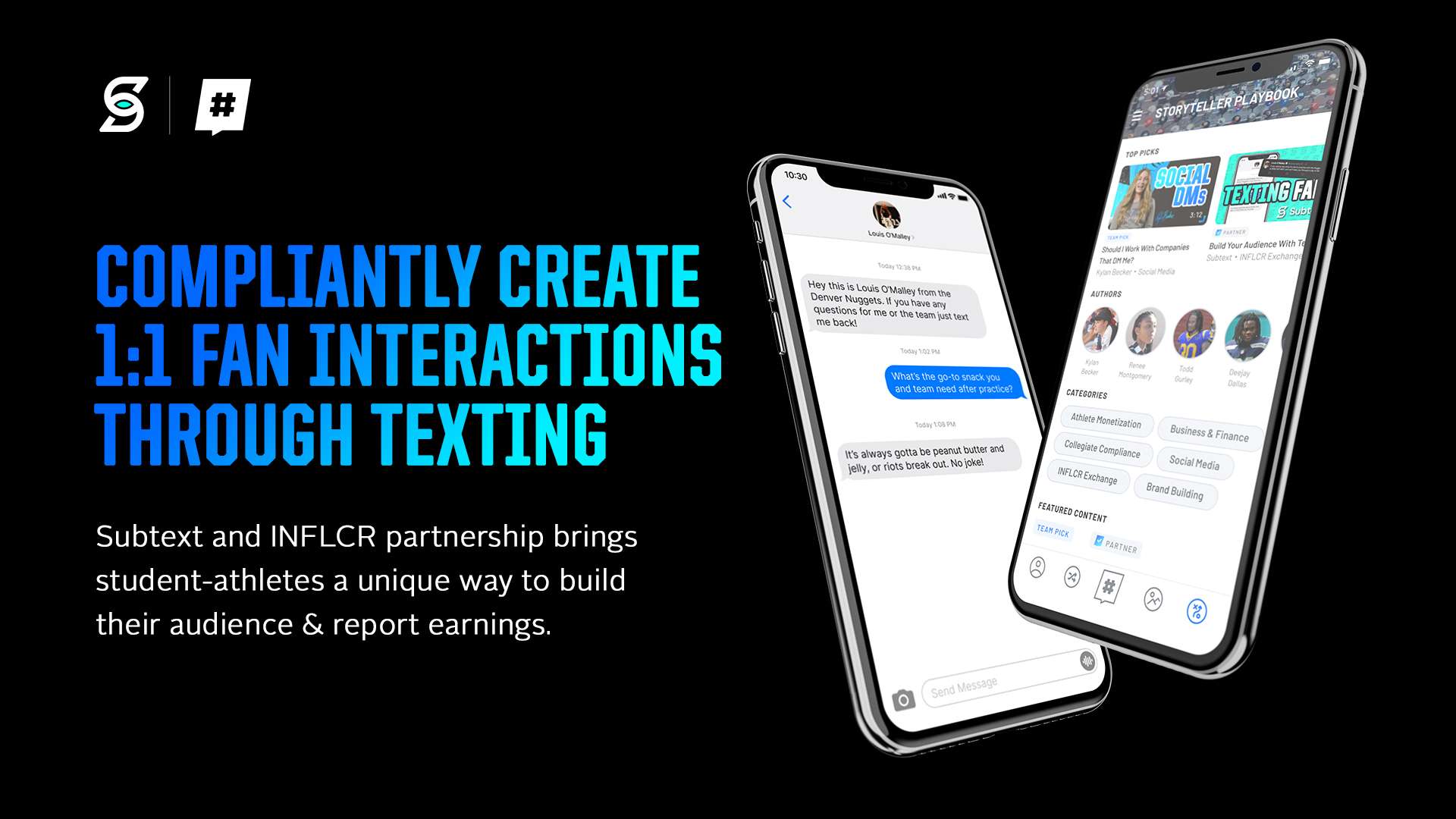 Subtext, a platform that connects creators with their audiences through text messaging, announced it is joining forces with INFLCR to allow student athletes to communication with their following and monetize their name, image and likeness through SMS texting.

See INFLCR’s other partnerships in our marketplace tracker

The partnership will bring Subtext to INFLCR’s more than 45,000 student athletes through its branding-building and compliance platform.

“Subtext is a partner that student athletes can really leverage to be able to digitally engage with their fans and get paid to do it, just like they do through other partners like Cameo,” said INFLCR CEO and founder Jim Cavale. “Gary V[ayerchuk] made it famous really early on, giving out cell phone numbers and saying ‘text me.’ You’ve probably even seen it in people’s [social media] bios.”

Subtext co-founder and CEO Mike Donoghue says they built the platform to give creators, artists and athletes more control over their audience than social media offers and a better foundation for building a business.

“We looked at the media space and creators and artists and athletes and the amount of time and money and love and effort that sort of goes into building up these huge social audiences only for a lot of those same people come to the realization that they’re really kind of renting the relationship with their biggest fans from the social platforms. You don’t own that.

“Whether it’s algorithm changes, or monetization policy shifts, or that certain people don’t use Twitter, or certain people only use Instagram or TikTok, or whatever the case may be, there are all these things inhibiting people from being able to build businesses on those platforms.”

Donoghue says Subtext’s mission is to directly connect fans with the athletes they want to hear from in a more direct and private way that’s also financially sustainable for athletes. The company has already seen success partnering with artists from RCA and Sony, and increasingly the company is working with podcasts and media brands in the sports industry. Those partnerships have shown texting is an effective and financially rewarding way to grow the relationship with your audience.

“You’re not just showing up to an event and signing a bunch of autographs and getting a check for your time. This allows athletes to build a rapport with their fans and communicate with them in a medium that feels a lot more like a conversation with a friend.”

The real reward for athletes, however, is the recurring revenue they can generate.

“You’re creating a subscription-based financial annuity. If you’ve got 2,000 paying subscribers at $5 a month, you can net $10,000 a month just for sending some messages and interacting with your fans.”

Cavale points out that Subtext shouldn’t be viewed as a stand-alone opportunity for student athletes to monetize their NIL, however. He sees opportunities to use it in conjunction with other ventures.

“There are ways to use multiple platforms in a way that actually cross-promotes what you’re doing. I think all athletes who perform well on the field should consider having a t-shirt. Things like t-shirts and NFTs are like a stock. You play well and you have that link on your profile, the better you play, the more t-shirts you’re going to sell. Put a Linktree in your profile with a link to your t-shirt, a link to your Cameo and then when you’re doing that Cameo, you’re wearing that t-shirt you’re selling. Then people can click to communicate with you directly on Subtext. While Cameo is a personalized video, it’s usually a one-time thing, but Subtext is a regular thing.”

We all know on-field or on-court performance doesn’t always lead to positive interactions, however. For those in more high-profile sports who fear the negative feedback from fans, Subtext provides greater protection than social media. Fans must register with their first and last name and a real phone number that gets verified to protect against things like burner phones.

“We also empower athletes to fully control their subscriber list, so if at any time somebody is just being a jerk right a tough game, that athlete can just unsubscribe that person and they’re banned from ever signing back up here from that athlete,” said Donoghue.

He also pointed out that “trolling” athletes on platforms like Twitter is a performative act, meaning the person is doing it for the satisfaction of having other people see it. He think the nature of Subtext, where only the athlete sees the message, lessens the risk of such interactions.

Instead, Donoghue thinks Subtext will give student athletes the chance to take fans behind the scenes in an entirely new way. For example, some members of the media are using it to interact with fans in real-time during live games, allowing fans to text back and forth with them just like they would with a friend.

‘Your writing doesn’t have to bounce through the [social media] algorithms, it goes immediately to subscribers in real time. And, you can respond to it immediately. It’s an interesting way to take people behind the scenes and give them an experience they can’t get anywhere else.”

Obviously, student athletes aren’t going to be able to do this during their own games, but could they do it during a rival’s game being played at a different time? Or maybe a star on the basketball team wants to commentate with his fans during the school’s football game. There are innumerable ways for student athletes to take fans behind the scenes in new and interesting ways.

If you’re a student athletes who decides to try it, I want to hear about it! Shoot me a message through my contact form.

Check out our marketplace tracker for other opportunities for student athletes