Mark Emmert discusses the future of NIL, including his idea for athletes to be paid brand ambassadors for the university. 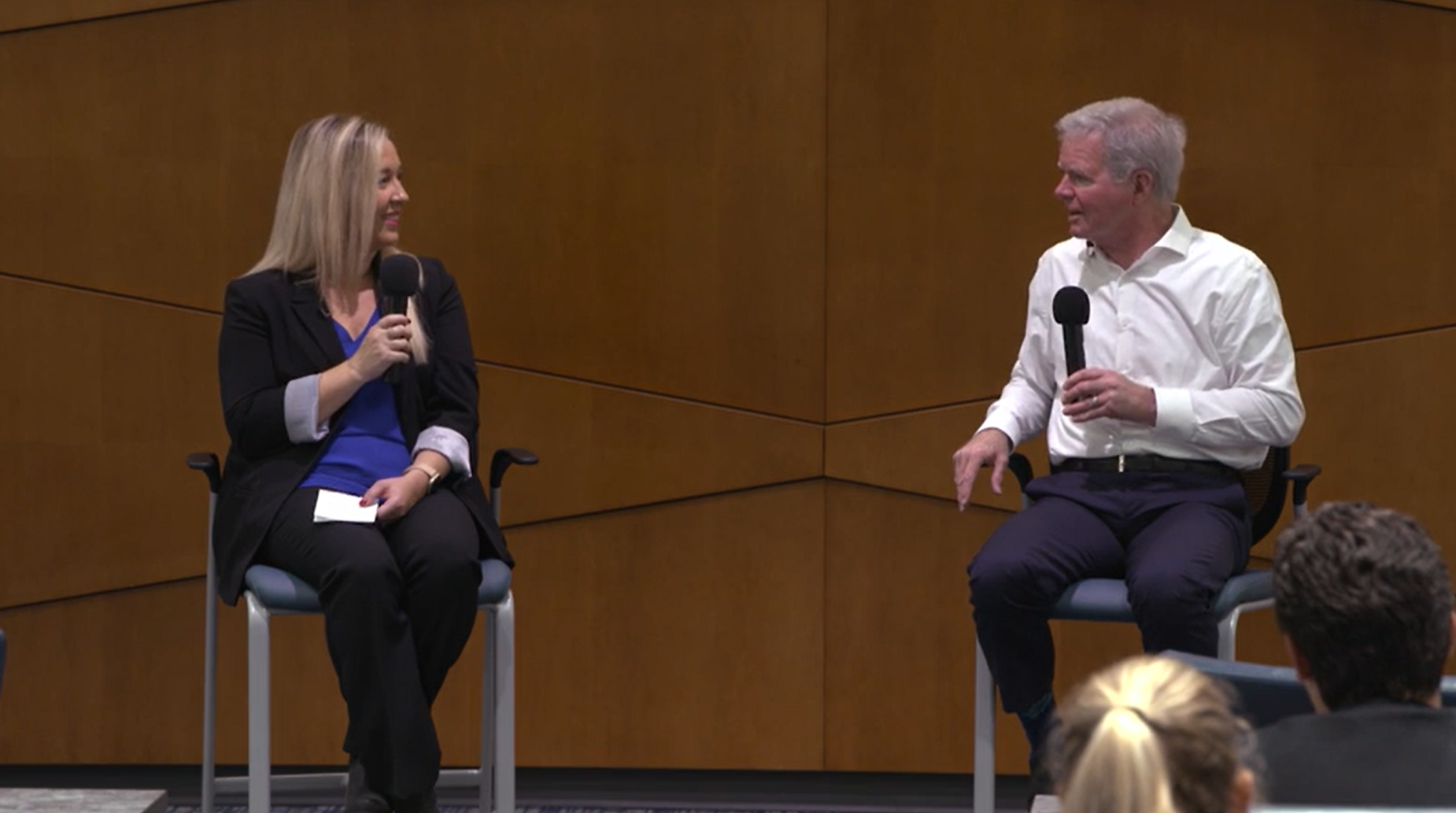 On Friday, September 9th, I was joined on campus at the University of Florida by NCAA President Mark Emmert. Special thanks to the UF Institute for Coaching Excellence for hosting this, which was an interview for both of the NIL courses I teach at UF in the Sports Management and PR departments. Students and athletes alike were invited, and I appeared in my capacity as a professor. Although this was not a media interview, the NCAA has granted me permission to share it.

In our nearly 90 minutes together, we discussed Emmett’s thoughts on NIL so far, where he thinks NIL is headed in the future and related issues like whether student athletes will, or should be, employees.

I’m releasing our full discussion, including Emmert answering questions from students, on my podcast, but I’m also summarizing the biggest topics we discussed below.

“Well, alright, who cares? Well, let’s think about this across all the country. Then they’re all employees, right? And all the employment laws of every state that apply then apply to all college athletes, basically. It’s a little more complicated than that.

“Now you don’t recruit a student. You hire them, and you fire them. You negotiate with them, and you have to pay taxes as an employee on everything you get.”

He went on to discuss how much an athlete might owe in taxes on their income, scholarship, room and board, along with books, supplies, non-athletic clothing and anything else you receive.

“You’re now no longer part of Title IX, by the way. Title IX has promoted gender equity, and college sports is irrelevant under that scenario, because it’s an education law. It has nothing to do employment.
That’s a really important fact. There’s no Title IX for workers. There’s a Title IX for students.”

Emmert went on to say that although it might make economic sense to do it for football and men’s basketball, it doesn’t make sense for other sports.

One concept Emmert came back to over and over was the idea of student athletes being paid as brand ambassadors of the university. This isn’t a concept I recall hearing him speak out previously. This topic came up several times, including as an alternative to the employment model.

After talking through the idea that athletics is the front porch of a university, and the number of universities who’ve reached national awareness among the public through March Madness appearances, in particular, he brought up the idea of compensating athletes as brand ambassadors of the university.

“If part of the marketing model for a university or college is the athletic department, why not figure out how to reward the students relative to their contribution to that marketing model?”

Emmert said he’d love to put in front of Congress or anyone else the following suggestion:

“A university can go to its football team and say, ‘Look, more people know this university because of the football team than anything else, so we’re going to provide X amount of money–pick a number–for the name image and likeness value that you all on the football team provided our university and put us on national television 12 times a year. Maybe 15 if you’re really good, right? And what did that mean? Or the baseball team or the gymnastics team or whatever.

“And you can scale that, of course, because while I happen to be a huge gymnastics fan, you don’t get 75,000 people showing up. But you get a good–especially here, a great program like yours, you get a lot–but it’s relative, so you can scale it all accordingly, and that would make good sense to me.

After we opened to questions from students, one asked Emmert where he sees NIL in five years, and he again brought up the brand ambassador model.

“I’m really serious about this brand ambassador model I’m talking about. I think that especially with the size of media contracts that are being created right now, there needs to be recognition of the brand building value, for the school itself, of the athletes. And so, finding a way to provide money to athletes, not as employees but as these basically brand ambassadors, that are that are are gauged to the marketing power of individual sports–whether we like it or not football is, especially here in the SEC, football is dominant, and, basketball and baseball and softball, some others follow behind it, depending on the school. You can gauge that. I really think a model like that would be very successful and very well received by athletes. Universities may not love it, but I think it works. I think it could work really well.”

Later in the conversation, after a student asked about collectives throwing off competitive balance, Emmert mentioned the idea that conferences could each decide for themselves if there should be caps on those brand ambassador payments in order to try and maintain competitive balance because they would be less open to issues with antitrust law than if the NCAA was the one enacting caps.

“I would like to see some caps be placed around what I was talking about this brand ambassador model, which could be done at the conference level without as much anitrust risk. But doing it at a national level becomes impossible. So you could say, all right in the SEC, you’ve got wealthier schools than others. Mississippi State’s budget, Vanderbilt’s budget, isn’t like Florida’s. Florida’s isn’t like Alabama’s, we all understand that. But you could say in the SEC, you can give NIL brand ambassador payments to the athletes on the football team, let’s say. Could be any sport, but let’s say football. But it can’t be more than $2 million. I made that number up. But whatever the amount is, X amount of money anywhere in the SEC. So that would create some parity within the SEC.

“If the Big 10 said, ‘Well, we’re gonna do 3 million,’ then the SEC could decide whether or not it wanted to go up or down or whatever. But the competition could be managed then at a at a more local level, and that reduces the antitrust violation. That’s what I that’s what I think is the only sensible answer here.”

Emmert also mentioned the move to a brand ambassador model as a way to bring collectives in house and support all athletes, not just the few a collective has decided to support.

“Potentially, under this model I’m talking about, you could then have your collectives, to the extent they exist, you can pull them into these university, because right now you have to push them away, which is exactly what you don’t want to do. You want to bring them in. And so now you could work with the collective and say, ‘We need to fully support our, our football, basketball, men’s and women’s basketball, all of our sports programs. We need X amount of money to be able to support their work as brand ambassadors.’ And so now that collective is out there still raising money, and still throwing in money, but now they’re helping you support all these students.”

After sharing how many “agents” have contacted me who aren’t aware of state licensure requirements, and some of the predatory contract terms I’ve seen, I asked President Emmert if the NCAA is considering certifying agents for NIL representation or if he thinks it’s even the NCAA’s place.

“We did, in fact, create an agent model for certifying them to represent athletes in the basketball draft and some other activities, but it hasn’t expanded around this NIL arena. And I think it probably needs to, whether it’s the NCAA doing it, or some other independent entity, is neither here nor there. It needs to be some credible entity that can say, ‘Yes, this person actually has the cred to and the knowledge to write a contract with you and and provide you with some sound advice.’

“That that’s a role that needs to be played here. Again, you can’t overstate the problem of having 30 or so states with different state laws. We’ve got this crazy patchwork of laws. In some states, universities are allowed to be involved in some of these activities. In some states, they’re forbidden from it. In some places, there are some constraints on agents. In some places, there’s no constraints on agent. We need some standardization across the country on this issue.

“And the NCAA as a collection of the 1100 schools of college sports needs to be involved in that. Whether they run it or not, I’m agnostic about, but there has to be a role there, because there are people engaged in those kinds of predatory contracts, and we need to make sure that doesn’t happen.”

There are so many additional nuggets from this interview, but we’ll have the full audio available very soon. Bookmark this page and check back or follow me on Twitter to check it out when it becomes available.