Does Memphis to the Big East make sense? (Part 1) 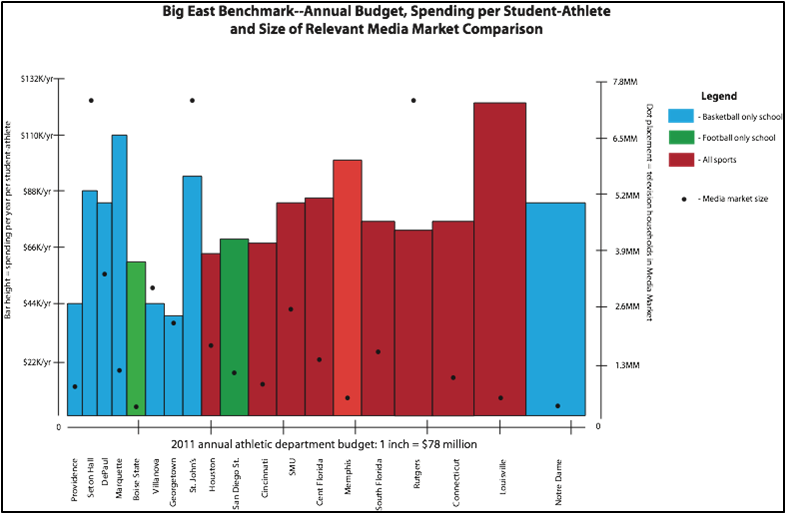 Let me take a devil’s advocate approach and put forward the hypothesis that the Big East’s acquisition of Memphis is exactly that–another transaction in the merger & acquisition activity of a major corporate entity (the Big East) whose primary mission is to maximize returns to its shareholders (member schools) and develop a sustainable, defendable competitive position in the marketplace.

From a strictly analytical and benchmarking basis, Memphis fits right in with the Big East in a variety of ways.  The graphic below includes four different pieces of data that support the case the Memphis is a good fit:

The Y axis represents the 2011 annual budget for each athletic department that will be in the 2015 Big East (all data from the EADA cutting tool: http://ope.ed.gov/athletics/).  One inch of width represents $78 million and the schools are aligned from the smallest on the left to the largest budget on the right.  Basketball-only schools are blue, football-only schools are green, and all-sport schools are red, except for Memphis which is pinkish to stand out.

The X axis on the left (and the height of the bars) represents annual spending per student-athlete, which is a reasonable reflection of how well a department is able to support the number of teams and athletes they have.  The X axis on the right (the placement of the black dots) represents the number of television households in the relevant media market for each school.

By all of these measures, Memphis more or less hits the middle of the road for the Big East and should fit right in.  The only notable outlier is Memphis’ spending per student-athlete–at $101,518 that puts makes them third in the conference, behind only Marquette and Louisville and significantly ahead of the median of $79,369.  This would appear to be driven by the relatively small size of teams at Memphis compared to the rest of the conference.

Some other benchmarks of note further support the Tigers’ fit with their new home.  The median undergraduate enrollment for Big East institutions is 12,674 and Memphis has 12,833 students.  The median Big East school has 492 student-athletes and 15 teams, while Memphis has 411 student-athletes and 16 teams, so the school apparently has smaller teams on average .  The Tigers are right at or near the median in terms of number of total teams (16), total department revenues ($41.7MM), and total department profit ($0).

The same holds true if you look at measures that indicate the relative role of athletics on campus, including the number of enrolled students per student-athlete (Memphis is exactly at the Big East median at 31.2) and the money the department spends per enrolled students on campus ($3,251 for Memphis and $3,223 for their new conference).

In terms of the sports that drive the economic engine, Memphis also fits the Big East mold in a general sense.  The Tigers are underachievers in football, ranked near the bottom of Division I both in competitive record (116th) and average attendance (93rd).  The Big East is not known for outstanding football, but the median school still performs at a higher level on the field (median ranking of 53rd) and at the ticket office (213,905 tickets sold in 2011 versus Memphis’ anemic 120,470).  Big East schools tend to spend in the $15 – 20 million range on football and generate some surplus or at least break even, but they’re far from the powerhouses who create surpluses that are in some cases larger than the entire budget for many Big East schools.

While the conference would certainly like all members to perform like Houston and Boise State did in the 2011 season, they appear willing to accept very average performance that is enough to meet the bare minimum of Division I standards for success.  To move into the middle of the pack in the conference, Memphis will likely need to invest an additional $4 million or so, which would likely generate at least a neutral/break even return.  Cincinnati, for example, spends a little more than $11 million and showed a profit of over $2 million last year.

In the world of men’s basketball, however, Memphis enters the nation’s most powerful conference in a leadership position and brings a great deal to the table.  Only Louisville drew more fans (458K vs. Memphis at 318K) and finished the year ranked higher (3rd vs. Memphis at 8th) in the 2011 season.  Memphis spends and generates more than $1 million more per year on basketball than the median Big East school and should start their tenure as a legitimate threat for a conference title with no additional investment.  Given the intense and vocal lobbying by coaches like Rick Pitino for Memphis, it is likely that Memphis basketball will only improve in terms of its ability to attract investment and top flight recruits.

The financial attraction of the move for Memphis is largely driven by the incremental revenue they will realize from the next projected Big East media rights deal.  Several months ago the conference turned down a $1 billion offer from ESPN that would have generated roughly $100 million per year for the conference.  There is no imminent deal to replace the $200 million 6 year contract that will be up soon and the loss of regional football powers like Pitt, Syracuse, and West Virginia is probably not going to be balanced by the addition of San Diego State, Boise State, Memphis, and Navy.  Nonetheless, even a low-ball new arrangement that is not on the same scale as the Pac 12, SEC, or Big 10 will still be a considerable improvement over the alternative that Memphis would have had by staying in Conference USA.

Here are the gory financial details for Memphis.  There is an entry fee to Big East of $2.5 million that is to be taken out of revenues from the future TV deal over a five year period, so that’s money that Memphis won’t see but doesn’t have right now anyway.  There is also an exit fee from Conference-USA that includes a $500K flat fee and $6.1 million in TV rights.

Memphis AD RC Johnson points out that all sport programs in Big East received $8.6 million last year, more than $5 million greater than the C-USA equivalent payout.  Assuming that margin is maintained as both conferences negotiate newer and inevitably larger contracts, Memphis will gain at least $5 million per year from from the media rights deal alone.  Over five years that nets out to $9.1 million in entry and exit fees (assuming none of that gets negotiated down) compared to $25 million in increased revenue.  Even if Memphis increases their annual football budget by $4 million per year, they’re still significantly ahead of the game after 5 years without considering any other potential financial windfalls.

Another critical resource will be the NCAA men’s basketball tournament payout.  The Big East earned $26.1 million in 2011, which yielded $1.6 million for each of the 16 schools.  By comparison, C-USA only garnered $5.5 million for their performance.  While you would not want to make an investment on an assumption of the Big East teams performing at the same historic level every year, it is safe to say that Memphis will likely net an additional $1 million per year from the tournament even after dividing the spoils a bit more with a slightly larger membership.

Check back tomorrow for Part 2, where Dr. Lorenzen takes a look at whether this addition makes sense for the Big East.

ACC “Only” Adding Extra $1-2 Million Yearly in Expansion
Should Division I Schools Vote to Overturn the NCAA’s Multi-Year Scholarship Measure?