Student Athlete Perspective: Let Your Body Do the Work

A student athlete shares her perspective on mental health struggles. 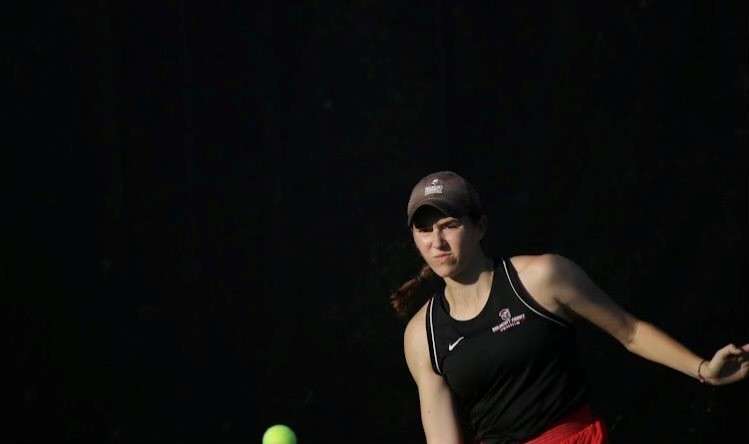 This Student Athlete Perspectives is authored by Molly Hencken, a tennis athlete at Belmont Abbey.

Is it bad to say I was relieved when I suffered a somewhat career-ending injury?

I have played tennis for most of my life and have always put overwhelming pressure on myself to perform well, especially when I played in front of others. It sounds similar to the typical attitude many college athletes have while playing a game or match when they realize the outcome reflects so much more than just their personal wins and losses. This same feeling is often ignored by athletes because they don’t know which direction to turn to when their feelings of anxiety take over their daily habits.

I never realized why my mind was constantly worked up even in a relaxed practice setting. We could be doing a serving drill trying to hit down cones as a team, and I would still feel my arms shake as I tossed the ball while I felt everyone’s eyes pelting into my serve motion. We could be doing a cross-court rally trying to hit 50 balls, and I would somehow miss every 49th ball in the net. We could be playing a set against one another to practice match play and get in the right mindset before an upcoming match, and I would be more nervous than ever trying to barely skip the ball over the net so I wouldn’t launch it past the baseline as I usually would.

As much as I told myself to calm down and let my body do the work, it was just a temporary fix. I would create a mantra for myself without really listening to the words. I was going into a fast downward spiral without knowing any way to get out of it.

It wasn’t until the very last match that I played before I injured my shoulder that I realized I was showing a pattern of anxiety that was like clockwork, and I was hopeless trying to find a solution on my own. I paused on the court while my coach was watching me; it felt like the whole school was watching.

I was exhausted walking back to my dorm room after that match, and I remember the same feeling of defeat that I experienced that day. I texted my assistant coach that same night to let her know there was no way I would be able to play what would’ve been the last day of the tournament. Throughout the conversation, my coach was extremely understanding which made me feel much calmer and relaxed facing the embarrassment of how horribly I played.

It took me long enough to notice the feelings and thoughts I went through were only in my head and my consciousness. No one else was worried about the forehand I shanked into the other court, my rigged serve motion, and even my tight backhand stroke. This was only in my mind; I was my own self-critic.

As soon as I stepped on the court for practice, a match, or match play, I was in a constant state of panic until I was able to walk back to my dorm room after practice and finally decompress. The feeling of relief and relaxation didn’t last for long as I needed to hop in the shower and start homework that I had procrastinated on for about a week or two. It was like I was in a cycle of stress, a little bit of relaxation, and then immediate overthinking all over again.

By the end of the day I was so drained to even break a smile around my roommates and the constant dread I felt to get out of bed every morning was more than obvious. I would break down in tears of pain of why I felt this way and thought no one else could possibly feel the same. I knew that I couldn’t stop my negative self-talk without help. I was just too afraid to tamper with my ego to seek it.

I eventually was able to speak to a specialist who has helped me more than I could ever imagine. She opened my eyes to ways to deal with anxiety in everyday life, no matter if I was playing tennis or not. She taught me how to live free from the pain and negativity I was barely surviving with. She taught me to let my body do the work instead of letting my consuming thoughts take over. Most importantly, she taught me that no matter how alone I can make myself feel, there is always someone out there to help me and understands what I’m going through.

After I started therapy, I became very passionate about the mental health struggles that college athletes face. Mental health affects one in four people. The statistics themselves show how important it is to point out the proper resources that many athletes are too afraid to use. The overall stigma of athletes being mentally and physically strong is too much pressure to balance; it is not a weakness if you are mentally struggling. Every athlete should have the opportunity to exercise their mind just as much as they exercise their bodies.

I began following various social media platforms after following Victoria Garrick, a former D1 volleyball player for the University of Southern California. She experienced much of what I was going through and her TED Talk highlighted the complex mental struggles that plenty of college athletes were too afraid to talk about. Victoria is also the host of REAL POD, a podcast that discusses the real aspects of life that are difficult to talk about like mental health, eating disorders, anxiety, intuitive eating, body confidence, and so much more.

One of my favorite quotes of hers is, “Just because you carry it well doesn’t mean it’s not heavy”. This made me realize how many athletes are facing the same mental health challenges that I am going through. Victoria founded The Hidden Opponent which is a nonprofit organization that supports mental health awareness, education, and support for student-athletes.

The Hidden Opponent support system encourages athletes to get involved on their campuses and make a safe space for their fellow athletes to do the same. Overall, this platform promotes the wellness and health of athletes nationwide; it is somewhere for athletes to turn to when they are beginning their mental health journey.

As much as I wanted my shoulder injury to be career-ending, it was a career-altering injury at most. When I was at my lowest, I wanted the much easier way out of the sport that I have dedicated much of my life to. I was terrified of seeking help for the years of self-induced anxiety. As much as I wanted to easily walk away from the court and never step foot on it again with a racquet in my hand, I knew I needed to repair the many mental health struggles that I was silently dealing with.

You are not alone and there are many resources that will help you. Do not be afraid to speak up if you are silently struggling, there is a solution and someone who can help you. You as a person, are worth more than the wins and losses you overwhelm yourself with. Most importantly, you are more than your anxiety.