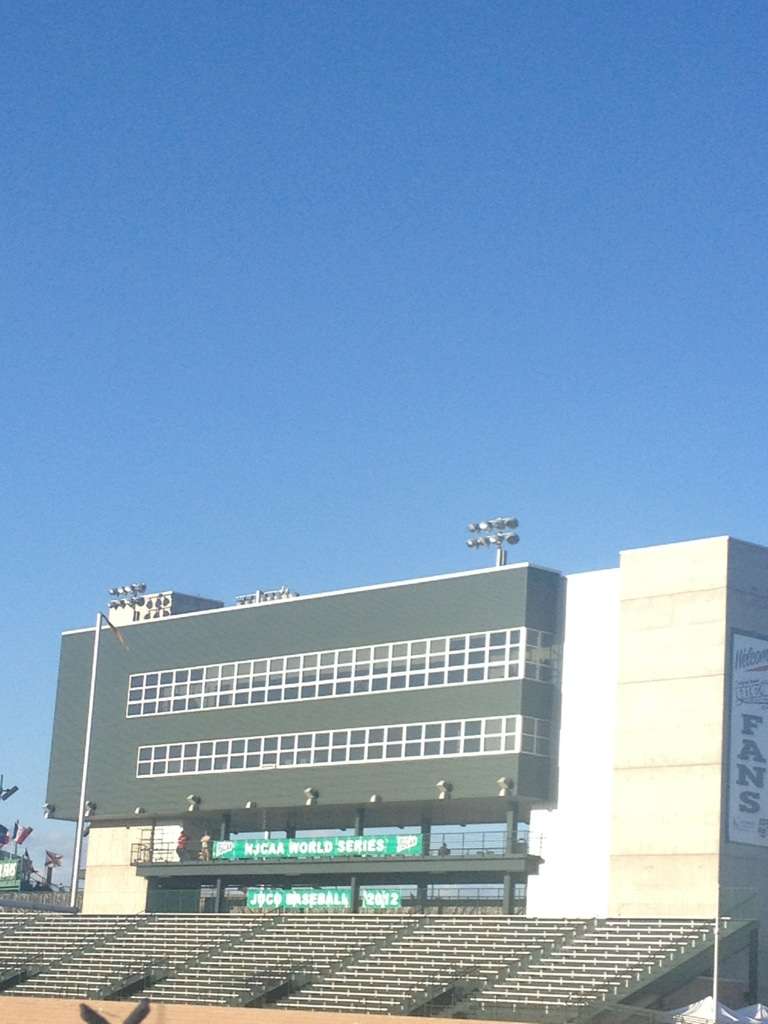 Is it possible in this day and age to hear about an intercollegiate national championship without also hearing stories of improper recruiting, conference realignment and pay-for-play scandals?

Believe it or not, it is.

For 55 years, the small western Colorado city of Grand Junction has played host to the Junior College World Series.  From the Friday before Memorial Day until the Saturday after, Grand Junction citizens devote their livelihood to supporting the baseball dreams of young men from across the country.

In 2012, those men represented junior colleges from nine states between South Carolina and Nevada as they competed to win the championship team trophy and the gold medals that are awarded to the members of the championship team.  Winning the JUCO World Series does not bring a school the chance to negotiate with a television network for a greater revenue distribution share.  Nor will it bring a large payout to the team’s school.  However, winning the JUCO World Series binds these young  to the others like them that have come before, that deeply loved baseball and experienced the strong sense of community Grand Junction, CO offers.

The 2012 JUCO World Series kicked off on Friday, May 25 with a banquet attended by over 1,000 individuals at the Two Rivers Convention Center.  The banquet serves as the tournament’s first warm welcome to players and coaches.  While each team in its entirety attends the banquet, the bulk of the banquet’s attendance is made up by local Grand Junction residents and business owners who purchase tickets and tables to support JUCO.  The room is filled with well-dressed people, who gather around their neighbors with proud smiles on their faces for what their city has accomplished through the JUCO World Series.

This year, banquet attendees received quite a treat, as the guest speaker was Don Meyer, who at the time he retired as an NCAA basketball coach, led the NCAA in all-time wins for men’s basketball head coaches.  Standing at the podium with a cane in his hand, Meyer served as an inspiration to the young men who would be taking the field the next day along with those present who have dreams of their own to fulfill.  A basketball coach for 38 years, one of Meyer’s legs was partially amputated in 2008 after he was in a car accident.  While recovering from the serious car accident in the hospital, doctors also diagnosed Meyer with inoperable liver and intestinal cancer.

Meyer’s response to recovering from a life-threatening accident and the terminal news of his cancer diagnosis, serves as an inspiration of how the love of something greater than one’s self can help one beat the odds against them, no matter how big the odds may be.  In Meyer’s case, what he loved more than himself was the opportunity to guide young men’s lives as a coach.  The depth to which this love found itself in Meyer’s heart is demonstrated by how Meyer responded to the amputation of his leg and being diagnosed with two forms of inoperable cancer.  At 4:30 a.m.  on the day that he was released from the hospital Meyer got in the car, headed to the gym and went back to work as a college basketball coach.

Leaving the Two Rivers Convention Center on Friday night, it’s safe to say that every young man believed that if he pushed himself just a little bit harder to overcome his personal obstacles, then his team could hoist the JUCO World Series championship trophy come June 2.

At 9 a.m. on May 26, the sun was shining in Grand Junction and the wind was blowing some 40 MPH.  However, a little (albeit strong) wind was not going to put a damper on the event that for 55 years, many Grand Junction residents have centered their Memorial Day weekends around.  Men who have served on the JUCO committee for decades arose early to prepare the field for the day’s games.  Many of these men would take days off of work throughout the following week to ensure that all ran smoothly with the tournament.  Perhaps its childhood dreams that drive these men’s desire to spend one week each summer practically living at a baseball stadium, devoting all of their time during that week to the operations of a baseball tournament.  However, more likely, it is their desire to serve their community and help young men achieve their own dreams that drives them out of bed before the sun rises to organize a baseball tournament.

Walking into the tournament this year, past attendees quickly noticed the grand renovations to the Lincoln Park Stadium, where the tournament is held.  Since fans left the stands after the 2011 tournament, the Tower at Lincoln Park was constructed.  The tower is an eight-story tall building which houses concession stands, media booths and an open space conference room that can be used for entertaining and events during sporting events (on the opposite side of the baseball field there is a football field where Colorado Mesa University plays its games).  The construction of the tower is a further demonstration of the long-standing commitment of Grand Junction and its residents to the JUCO World Series, as it was funded and developed by Grand Junction residents Jamie Hamilton and Bruce Hill, along with the school district, Colorado Mesa University, JUCO and the NJCAA.

While the most notable change this season was the finalization of the Tower at Lincoln Park construction, mention was made during the weekend of the breadth of development to the JUCO World Series that has occurred over the years.  On Sunday, May 27, a pre-game celebration was held honoring the 7th  year of the NJCAA and recognizing former NJCAA Executive Director, George Killian.  In the world of JUCO baseball, Killian is a celebrity of sorts.  Upon his arrival to any game or event, people quickly whisper to one another such things as, “That’s George.  You must meet George.”  At the pre-game celebration, an elderly Killian stood near home plate and recounted how in 1960, he came to Grand Junction to see if it would be fitting to host the JUCO World Series.  He noted that when he arrived to Grand Junction in 1960, all he saw before him was a cow pasture.  Yet, the city and the NJCAA forged a bond which has subsequently resulted in the two pairing to host the tournament over the last 55 years.  The measure of this was not lost on Killian, who as he stood below the new 80-foot state-of-the-art tower, noted, “What you see today, is truly a miracle.”

George Killian comments upon how far the JUCO World Series in Grand Junction, CO has come since 1960.

Perhaps some would call the success of the JUCO World Series over the last 55 years a miracle.  However, from an outsider’s perspective, it appears to be more so the expected outcome from an outpouring of love.  The men and women who call Grand Junction home undoubtedly love their city.  Additionally, it is clear that they recognize the good that comes out of one devoting his time to helping a community and others become better.  It is this mixture of love for a city and service to others that has allowed the JUCO World Series to successfully exist over the last 55 years while also making the dreams of young men and Grand Junction residents alike come true.