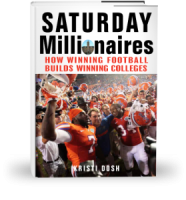 In 2012, Football Bowl Subdivision college football programs produced over $1 billion in net revenue. Record-breaking television contracts were announced. Despite the enormous revenue, college football is in upheaval. Schools are accused of throwing their academic mission aside to fund their football teams. The media and fans are beating the drum for athletes to be paid. And the conferences are being radically revised as schools search for TV money. Saturday Millionaires shows that schools are right to fund their football teams first; that athletes will never be paid like employees; how the media skews the financial facts; and why the TV deals are so important. It follows the money to the heart of college football and shows the real game being played, covering such areas as:

With a Foreword by Tim Brando

Chapter 1 – Does Football Pay for Itself (Even if the School Pays for Football)?
Chapter 2 – Are Coaches Overpaid and Bowl Appearances Overrated?
Chapter 3 – Why Student Athletes Will Never Be Paid
Chapter 4 – Conference Realignment
Chapter 5 – Why AQs Should Form Their Own Division
Chapter 6 – Call Them What You Want, but There Will Always Be AQs
Chapter 7 – What Makes a Good AD?
Chapter 8 – Why Notre Dame Grads Are Paying More for Cable So Indiana Grads Can Watch Their Team
Chapter 9 – What Has Football Done For Us? 8 Reasons Football Raises the University

“Kristi Dosh was the first sports business writer who wanted to learn how the actual financial side of a college athletics department works and how football drives (and spends) the revenues for an athletics program. Her legal training gives her great perspective explaining the impact of Title IX, television contracts, and pay-for-play with its tax implications for athletic departments. Kristi takes you into what Saturday football games really mean to universities across the country.” – Ben Jay – Director of Athletics, University of Hawaii

“The business of college football has changed dramatically in the past twenty years, and her understanding of why schools decide what they do separates her from anyone else I know in my industry. This is a book I’ve been waiting to read for years.” – Tim Brando – Fox Sports broadcaster

“Saturday Millionaires provides an inside, in-depth look into the money machine known as college football. It is a must read for anyone who enjoys the business of college football. The book takes the reader through the various myths that are often associated with big time college athletics. As a Sport Management professor, this book will provide analysis and information that is relevant to many different aspects of our field. – Matthew Blaszka, Assistant Professor – Hospitality, Recreation, and Sport Management Department, York College of Pennsylvania