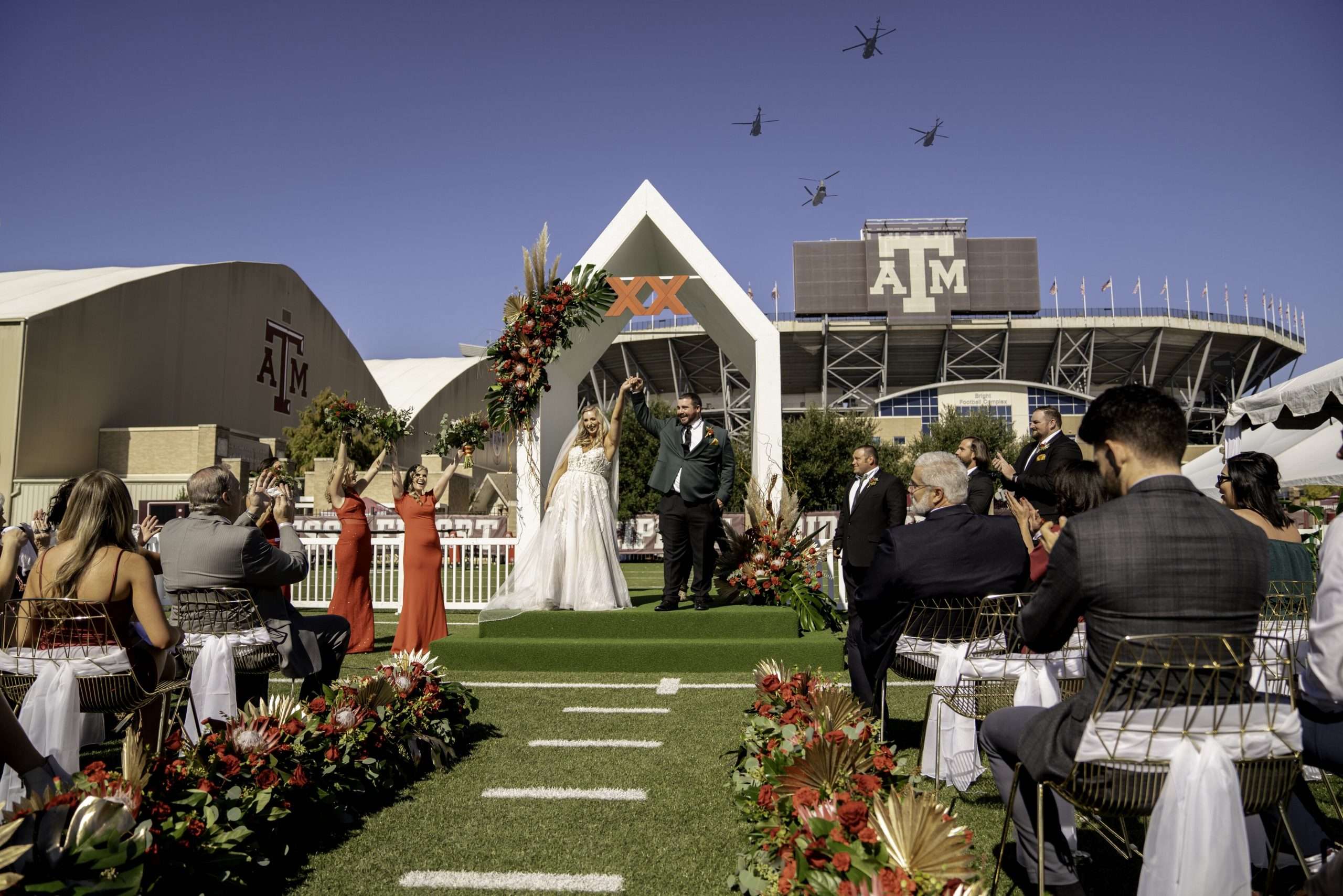 There has been much debate over the years about whether it’s acceptable to get married on college football Saturday. Perhaps, however, you’ve never considered getting married at a tailgate before the game and continuing the celebration into the game.

Dos Equis found a unique way to activate its college football sponsorship this weekend at Kyle Field in College Station, Texas, home to one of its partners, Texas A&M University. The brand decided to give one lucky couple the wedding of their dreams on the practice field just outside of Kyle Field mere hours before kickoff.

“As a brand with strong roots in college football, Dos Equis set out to solve the age-old problem of weddings interfering with football Saturdays in the fall. Morgan and Rodney faced that exact dilemma after getting engaged early this year — as Texas A&M super fans, it meant that Fall was no longer an option for their dream day,” commented Ashleigh Phelps, senior brand manager at Dos Equis.

“Dos Equis encourages its drinkers to get the most out of life at every opportunity, and delivering on a wedding ceremony, tailgate and game attendance in one day allowed Morgan and Rodney to do just that.”

The couple was chosen through a nationwide search. Both the bride and groom are Texas A&M graduates. Morgan Oliver, the bride, was only missing one family member at the wedding, her younger brother Bryce Foster, the starting center for the Aggies.

After tying the knot mere steps from the stadium, with approximately 30 guests in attendance, they were treated to a reception that featured an influencer DJ and professional mixologist before heading into the game to keep the partying going.

Fox Sports personality Charlotte Wilder, who is a co-host of the Fox Sports show the Ultimate College Football Road Trip, which is sponsored by Dos Equis, officiated the wedding. Wilder says this allowed her to fulfill a goal of her own.

“I said yes [to officiating] because I have two life goals, to give a graduation speech and officiate a wedding, and this was the latter. But in all seriousness, I said yes because getting married at a football game was to me the best example of how much college football means to fans.

“Everyone I talked to in College Station was so jealous of Morgan and Rodney! True fandom is kind of like a committed marriage: you stick with your team or your spouse through thick and thin because of memory and love and a sense of home. There’s something intangible and comforting about both.”

Dos Equis is pleased with the outcome of the activation.

“Dos Equis is continuously expanding its college football presence, with a renewed focus this year on the fan experience nationally. Bringing to life a wedding at a college football tailgate was a once-in-a-lifetime opportunity—not only for the bride and groom, but the team behind it as well,” commented Christine Karimi, senior manager of partnerships and consumer experience.

“We’re so grateful for our college sports partnership with LEARFIELD and Texas A&M Athletics, and their willingness to host such an out-of-the-box event right on the practice field. We also worked closely with our partners at FOX Sports, bringing Charlotte Wilder on board to officiate the ceremony, which drove additional impact for the activation. The news spread wide and fast online and via social platforms—resulting in Dos Equis trending on Twitter in College Station during the game.”