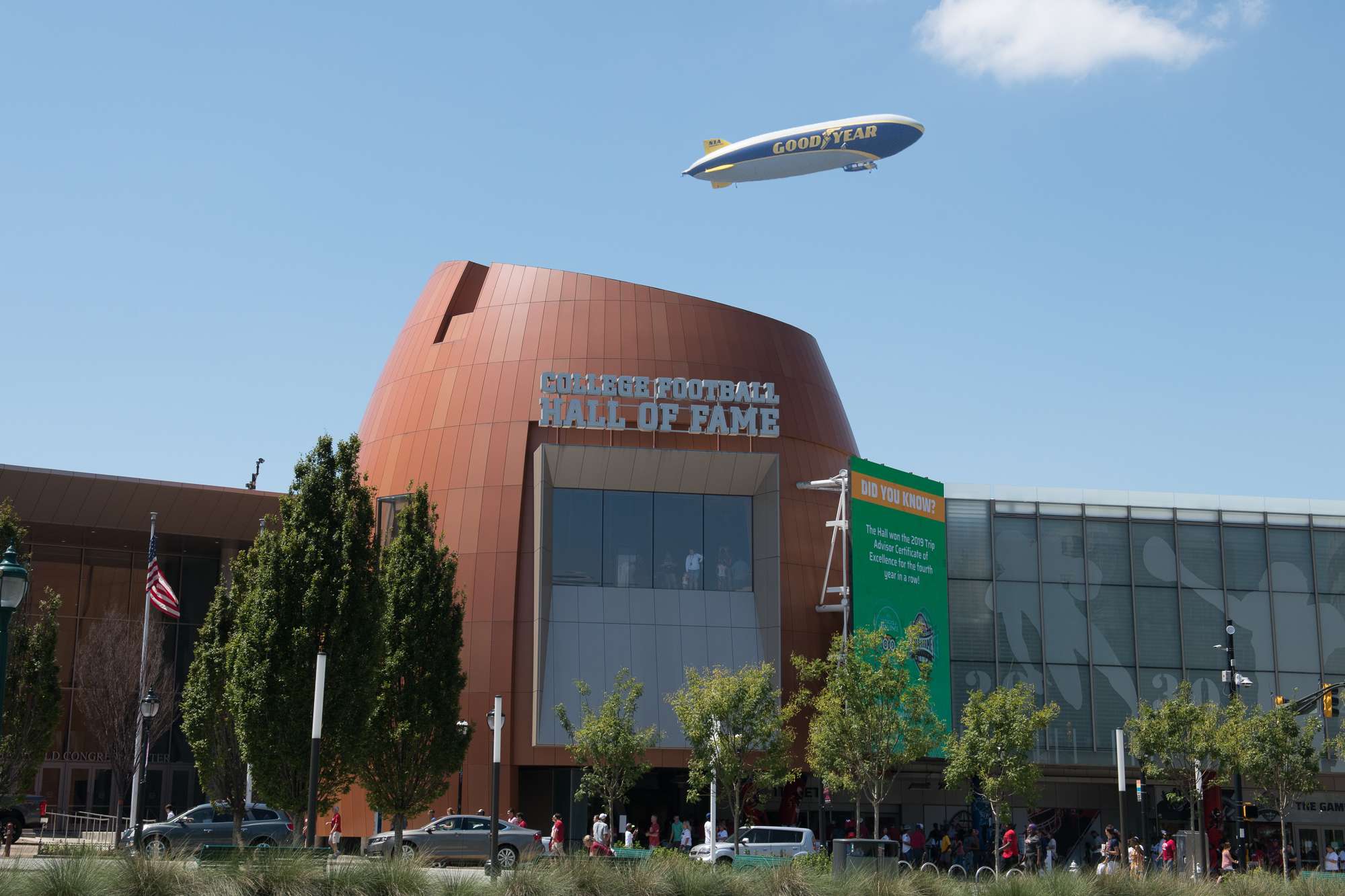 The Goodyear Blimp’s history with college football dates back to the 1955 Rose Bowl when a request came in from NBC to provide aerial coverage of the Rose Bowl Parade and the Rose Bowl game. The Goodyear Blimp was the first to provide aerial coverage of a major sporting event, the first to deliver high definition live video from an aerial platform to a national sports game and is now the first non-player or coach inducted into the Chick-Fil-A College Football Hall of Fame.

The new Goodyear blimp exhibit at the College Football Hall of Fame will include blimp artifacts, such an original broadcast window. The exhibit resembles the blimp’s gondola, which holds the passengers, crew and engine, and offers fans “Blimp View” on-demand, which allows fans to experience aerial views of college football’s most iconic stadiums. Additionally, the blimp’s LED screen will display personalize messages for fans and show aerial footage of marquee games dating from the 1950s to present day.

“The Goodyear Blimp is intrinsically tied to the history and traditions of college football, and through this exhibit, we’re offering fans a chance to experience the game in a way only this iconic airship could provide,” said Dennis Adamovich, chief executive officer of the Chick-fil-A College Football Hall of Fame. “It’s only fitting that in its honorary induction year, we unveil an exhibit that celebrates the blimp’s legacy, which has revolutionized the way fans experience the game they love.”

Following its coverage of the 1955 Rose Bowl, the blimp was tapped again in 1960 to fly over the Orange Bowl and then began to cover other sporting events more regularly, such as Super Bowl I. To date, the blimp has covered more than 2,000 sports and entertainment events and become a staple around college football.

“Goodyear is honored to showcase this exhibit, which is emblematic of our more driven approach to everything we do,” said Todd Macsuga, Goodyear’s general manager of Brand Marketing. “We take great pride in being a leader of firsts, and the blimp’s presence in college football has allowed us to be a leader in this area, bringing fans closer than ever to the sport. We look forward to driving innovation in aerial coverage for years to come.”

Goodyear currently has airships in Akron (OH), Pompano Beach (FL) and Carson (CA), which gives it the ability to cover virtually any college football game in the continental United States. You’ll see blimps on-site nearly every weekend, including at ESPN’s College GameDay and ABC’s primetime game.

One thing fans might be surprised to learn is that Goodyear pays for the equipment, travel and personnel required to provide aerial coverage of the games. Networks pay no fee to Goodyear but do provide the animated “blimp pop” you see on screen with the aerial shots. Goodyear sees it as a marketing expense.

And it’s not a cheap marketing expense. Goodyear has 75-80 employees dedicated to airship operations. A typical week during the college football season entails prep that begins on Wednesday, and then the television technicians depart on Thursday for their destinations. On Friday, the rest of the crew leaves with the blimp, which can take two days to travel since the speeds top out at 50-73 MPH, depending on the blimp model and the wind conditions. In total, it takes a traveling crew of 20-22 for each game.

For those interested in learning more about the Goodyear Blimp and its history with college football, the exhibit opens to the public in Atlanta at the College Football Hall of Fame on December 13, 2019.

This piece originally appeared on Forbes on December 11, 2019.