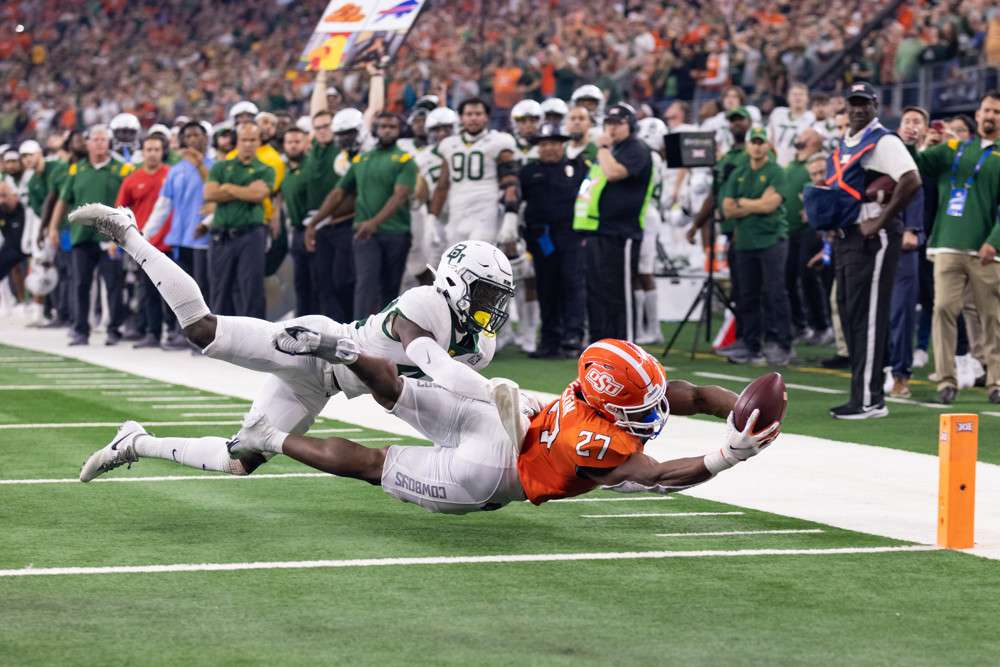 Months after the Big Ten and SEC reestablished themselves as the richest conferences in college sports with landmark media deals, the Big 12 took major steps towards solidifying its standing as one of the top conferences by agreeing to a six-year, $2.2 billion contract that splits its media rights between Fox and ESPN, sources told the Sports Business Journal.

The news comes after a whirlwind of major developments in the conference in the past couple years, from Oklahoma and Texas, the Big 12’s most lucrative schools, bolting to the SEC to four emerging programs from Group of Five conferences, Cincinnati, UCF, Houston and BYU, accepting membership in the Big 12 for upcoming seasons. The deal is also one of the first moves by commissioner Brett Yormark, who took over the role in June 2022.

From a media rights standpoint, the Big 12’s deal doesn’t reach the seven-year, $7 billion contract that the Big Ten signed with multiple rights holders or the 10-year, $3 billion deal that persuaded the SEC to move from CBS to ESPN. Still, the terms mark a significant increase in annual value for the Big 12 and give the conference much-needed stability. ESPN reports have the deal increasing the Big 12’s media rights income from $220 million to $380 million and a significant raise in the payout per school.

That increase is especially appealing for Big 12 considering the recent departures of Oklahoma and Texas — former commissioner Bob Bowlsby told lawmakers last year that the conference could lose half of its media revenue without those programs.

The dynamic between ESPN and Fox will provide plenty of inventory and competitive games for each rights partner.

According to SBJ reporting, ESPN will have the “A” package and their preference for their top four games, but Fox will also have access to prime matchups in a conference that projects to be competitive on a yearly basis. While ESPN will have access to the Big 12 football championship, Fox will add in men’s basketball to its offerings. After ESPN missed out on securing rights from the Big Ten and Fox wanted to be competitive in the market for further college football media rights, both companies achieved their aims by partnering with the Big 12.

With the Big 12’s immediate future secured, the pressure is now on the Pac-12 with its expiring media deal. The Pac-12 is the lone Power Five conference without a long-term media rights deal in place and has lagged behind the other conferences in revenue and competitively in football.

Similarly to the Big 12’s key departures, the Pac-12 lost its best media market, Los Angeles, with the moves of UCLA and USC to the Big Ten. But with Fox now agreeing to terms with the Big 12 and ESPN with plenty of inventory between the SEC, Big 12 and ESPN, the lack of demand for the Pac-12 games, especially games not in the top package, could force the conference to look outside traditional companies to broadcast games. The Pac-12 could also be at risk of losing additional schools, either to the Big Ten or Big 12, as other Power Five conferences are looking to go national and stretch across multiple time zones.