Is a Lack of College Football Parity Hurting Television Ratings? 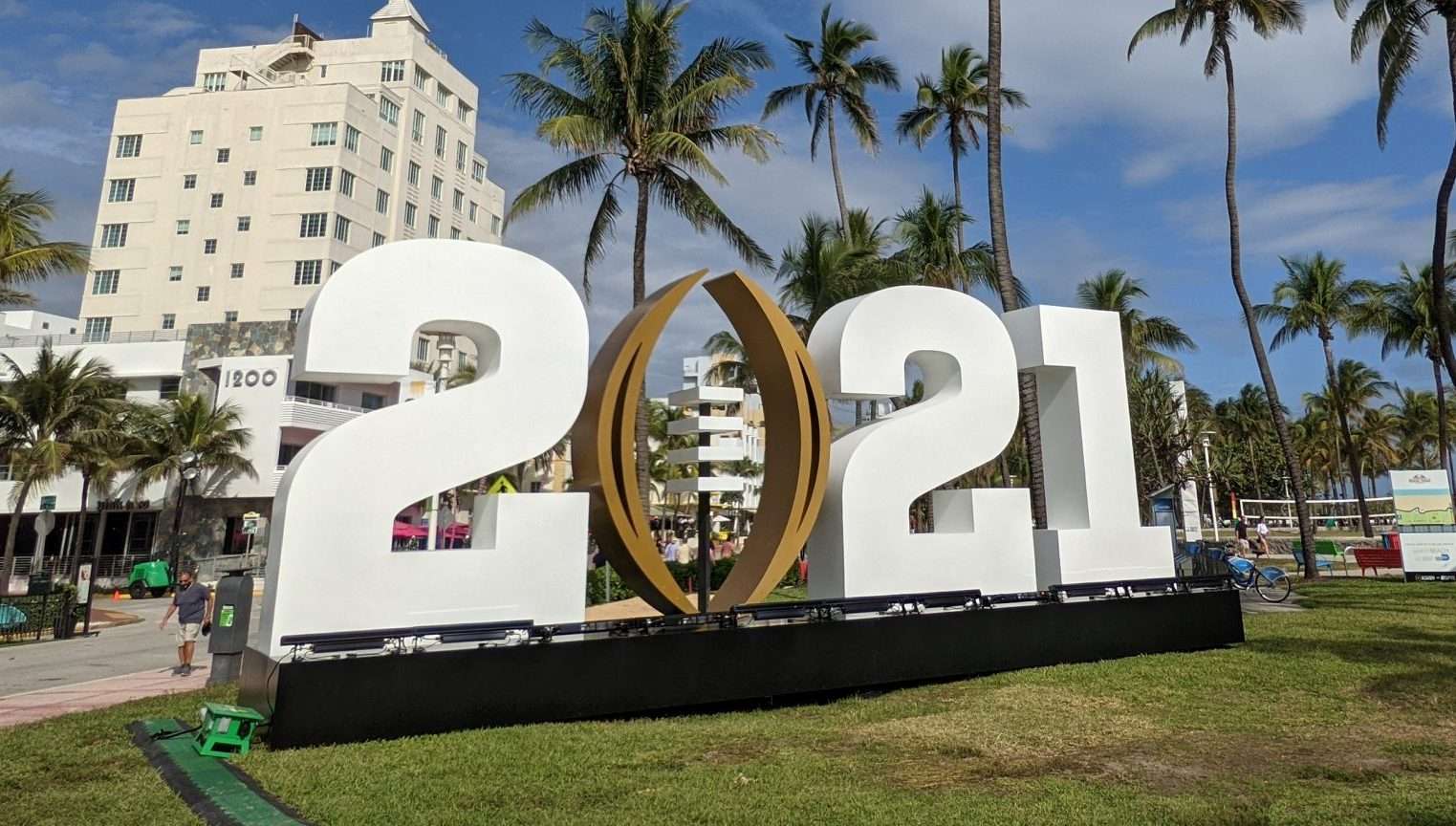 Millions tuned into ESPN and watched a college football champion get crowned earlier this month. The most tumultuous season in our lives—of which many believed may not finish or even start—concluded under the South Florida fireworks after playing host to two of the sport’s most gigantic and ambitious brands.

Less than 15,000 socially distant fans were present at Miami Gardens’ Hard Rock Stadium for the College Football Playoff’s culmination. But what cannot be placed squarely on the pandemic’s shoulders was the marquee matchup’s historically paltry television audience.

According to Sports Media Watch, just 18.65 million viewers watched the Alabama and Ohio State face off. This is the lowest figure on record for a CFP or Bowl Championship Series title game. The previous low occurred in 2005, when Southern California dispatched Oklahoma in front of an average of over 21 million viewers.

Per Sports Media Watch: “Alabama’s easy win declined 27% from LSU-Clemson last year (25.59M) and 26% from Clemson-Alabama in 2019 (25.28M). Viewership was less than half of the 34.15 million who watched the last time Ohio State played in the title game six years ago, albeit in year one of the playoff.”

Both semifinal matchups on New Year’s Day, which respectively earned around 19 million viewers, outdrew the championship.  Ratings for the whole four-team, three-game playoff went down 13% from last year.

But what are the root causes behind this drop-off in enthusiasm? After all, both the Buckeyes and the Crimson Tide boast large and fervent fanbases that have been kind to everyone from network executives to bowl committees across the football footprint.

Haves vs. Have-Nots: Is Lack of Parity in College Football to Blame?

Could an apparent absence of any competitive balance be hurting college football? Over the past 10 seasons, dynasties have ruled the roost in the sport. Alabama has won half of the national titles this past decade. And fellow blue bloods Clemson and Ohio State have claimed all but two of the remaining championships.

The structure of the playoff has changed the complexion of in-conference regular season games and conference championships. Some believe that to be a reason for the playoff’s ratings decline.

“The process of this Playoff is the issue,” tweeted Fox Sports broadcaster and analyst Tim Brando. “The Conference Titles would really matter if the Winners were receiving bids! Plus the BEST G5 should be IN! Add 2 Wild Cards and schedule this thing without 3 week playoffs between semi’s and the Title game. This year was an outlier.”

But the setup of conference title games isn’t the issue at hand, because they too have been just as exclusive to a chosen few elite programs as national championship matchups have been. Alabama, Ohio State, Clemson and Oklahoma have only been denied a championship in their respective conference a combined three times in the past five years.

Could fans of brands outside the sport’s highest tier be watching less football out of a sense of pure hopelessness and despair that their teams are seemingly far away from being able to compete for championships?

Lack of Parity in Professional Sports

The top of college football could be too dominant for casual fans to be fully engaged. But it’s not a problem unique to that sport. The NBA has seen just two champions in the last nine years that weren’t either the Golden State Warriors or a franchise with LeBron James. The NBA Finals’ ratings were down 49% in 2020 year-over-year.

Other events have also struggled to attract eyeballs. 2020’s Stanley Cup Final and the final round of the Masters hemorrhaged half of their respective 2019 audiences. Even the NFL—by far the most-watched and most stable American sporting body—saw its ratings fall 10% according to the Hollywood Reporter.

Beyond a lack of parity in college football and other sports, audiences may have been less likely to watch for a number of different reasons. The nation has been distracted by political affairs over the past year. Presidential debates, election coverage, and cable news have dominated the headlines in recent months, with new developments seemingly developing every day before a weary and distracted nation. The ever-evolving pandemic has also added another layer of uncertainty to Americans’ behavior.

The constant schedule changes across all sports due to COVID may have also disrupted fan routines and normal viewing habits.

At the same time, sports could also serve as distractions to these external events. Viewers could have rallied around college football games and other events. And to an extent, they did. 10 million Americans watched Notre Dame beat Clemson in the Nov. 7 regular season meeting, as well as a Week 12 NFL matchup between Pittsburgh and Baltimore.

Both of those games were highlights of the sports viewership year, but one of pronounced declines elsewhere.

Do We Need to Improve Parity in College Football?

There are many possible diagnoses for this ratings drop-off. Competitive imbalance strikes as a leading or dominant factor. If that is indeed what’s driving viewership declines in college football, the NCAA and/or the major conferences must investigate this parity paucity and neutralize it.

Coaching salaries reveal systemic inequalities between the championship contenders and the less successful programs. It’s not a coincidence that universities paying upwards of $9 million annually for head coaches have more on-field success than athletic departments paying closer to $3 million per year. Business of College Sports tracked the compensation levels for Power Five conference head coaches in 2020.

In a sport littered with polarity, intercollegiate athletics will have to innovate their way into a more equitable future among its members.

NIL to the Rescue?

Name, image and likeness (NIL) legislation may lay out a pathway to leveling the playing field in college football. It’s too early to guess with much certainty how future NIL bylaws may change how teams are built or how championships are won. But it’s been hypothesized that prospective student-athletes may seek destinations where they can better stand out compared to their peers when endorsements are at play. This would spread out top talent to more than a chosen few teams.

A surge in television viewership may accompany a more even landscape in the sport driven by NIL or other remedies. Business of College Sports tracks the latest NIL developments.

There are many possible methods to describe the falloff in TV audiences in college football and other sports. Ultimately, it may be seeing some of the same teams in the biggest games on an annual basis may be rendering fans nationwide bored. College football’s viewership figures for this season’s championships were humbling for the sport. A fix is needed. Seeing more and different programs competing for conference and national titles would be a start.

Check out our NIL Hub for all the latest news and analysis on name, image and likeness legislation as well as upcoming resources for athletic departments and student athletes.