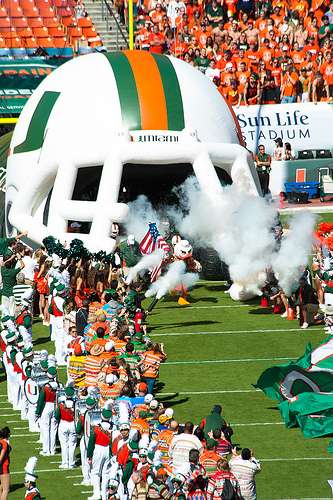 Since the Yahoo! report detailing improper benefits allegedly given to a number of University of Miami football and one basketball player, I’ve received a lot of questions about whether the NCAA would levy the death penalty against the football program. This week, NCAA President Mark Emmert made it clear that he’s willing to use the death penalty if the circumstances warrant the harsh penalty.

Kentucky’s death penalty arose from the arrest of three former Kentucky basketball players who were arrested for shaving points during the 1948-49 season. Another player, who was still enrolled and playing at Kentucky, was accused and investigated and eventually suspended from the University. In the end, the NCAA placed all sports at Kentucky on probation and banned each sport from post-season competition for the 1952-53 season. The NCAA then pressured all other schools into not scheduling Kentucky, effectively cancelling the season for every sport.

Southwestern Louisiana’s basketball program was found to have a number of different violations following the 1972-73 season, which ranged from academic fraud to improper benefits to recruiting violations. Among the most serious violations were instances of academic fraud, including five players who were allowed to compete despite having GPAs below the NCAA’s requirement. In one case, an assistant coach forged the principal’s signature on a recruit’s high school transcript. The NCAA banned the basketball program from play for two seasons in 1973-74 and 1974-75.

The most famous death penalty case was when SMU lost two football seasons in the late 80s. In 1985, SMU was placed on probation for three years (its fifth probation since 1974). The very next year, an investigation found that 21 players received cash from a booster with the assistance of athletic department staff members. Payments were found to start just one month after SMU’s probation began. The ultimate death knell was when it was discovered SMU officials lied to the NCAA about payments being stopped. The board of governors decided behind closed doors to continue honoring payment commitments to current players and stop operating the booster-funded slush fund only once those players had graduated.

The punishment would prove devastating for both SMU and the Southwest Conference. SMU’s 1987 football season was cancelled and all home games in 1988 were cancelled. The NCAA allowed SMU to play all away games in 1988 so that other institutions wouldn’t be financially harmed, but SMU chose to cancel the away games. The NCAA had allowed players to transfer out of SMU and most had, leaving the football program without enough experienced players to field a team in 1988. SMU’s probation was extended to 1990, and its existing bowl and live television bans were extended to 1989. Fifty-five scholarships were lost over a four-year period, and the football program was only allowed to have five full-time assistant coaches instead of the typical nine. No off-campus recruiting was allowed until August of 1988, and no paid visits could be made to campus by recruits until the start of the 1988-89 school year.

The death penalty ended what was once a storied football program at SMU. Even after the punishment was complete, recruits were hesitant to attend SMU. An SMU football team wouldn’t appear in a bowl game again until 2009. The Southwest Conference folded in 1996, and many point to the financial crippling of SMU’s death penalty as a contributing factor.

The NCAA has not used the death penalty in Division I since SMU’s football ban in 1987 and 1988. Kentucky basketball had recruiting and eligibility violations the NCAA acknowledged were severe enough to warrant the death penalty, but declined to institute the penalty, noting the school’s president took swift action to get the program under control as soon as violations were discovered. The NCAA used the same reasoning to avoid using the death penalty against Baylor’s basketball team in 2005.

The current standard then would seem to be that a program has to be a repeat violator or a willful violator and school or athletic department officials have to know of the violations and not act.

So, if the Miami allegations can be proven by the NCAA during its investigation, does Miami deserve the death penalty? Deserve? Yes. Will it receive the penalty? No. Emmert said earlier this week, “”I will say that the university is being extremely cooperative and that is extremely helpful.” That’s the kind of language seen in the reports on Kentucky and Baylor where the death penalty could have been used but wasn’t because school officials acted quickly to rectify the situation.

The death penalty at SMU has been compared to a nuclear bomb. It was devastating for both SMU and the Southwest Conference. Today, things are even more complicated with conference television contracts reaching into the billions of dollars. Levying the death penalty against one program impacts every other program it is scheduled to play, and can devastate the conference as a whole. For example, it is believed that ESPN could rework its contract with the ACC (worth $1.86 billion over 12 years) if Miami received the death penalty.

In order to protect the financial health of college football as a whole, the NCAA cannot levy the death penalty against Miami. Even if it’s deserved.

Check back later this week for an analysis of the financial impact the death penalty in football and basketball would have on the University of Miami’s athletic department.