Stricklin walks through how he prioritized facilities projects in Gainesville. 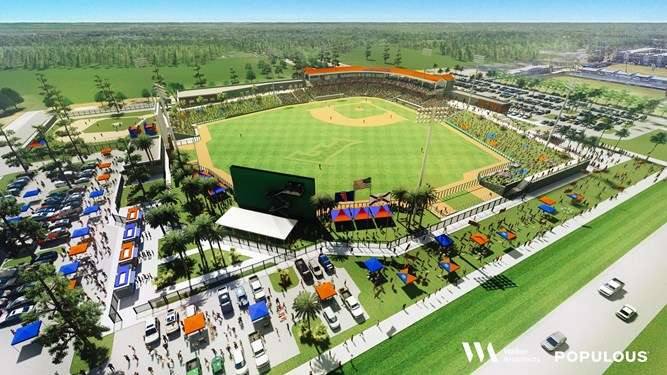 When Scott Stricklin arrived in Gainesville three and a half years ago as University of Florida’s new athletic director, he walked into an athletic department with a variety of facility needs. Although renovations had just been completed at the Exactech Arena at the Stephen C. O’Connell Center, where basketball and volleyball compete, and football had a new indoor practice facility, many other facilities were in need of renovation or replacement.

“Jeremy Foley was AD for 25 years, they won 27 national championships and over 200 SEC championships. That’s a lot of success,” says Stricklin. “And so, when you’re winning, it’s easy to go, ‘You know, what, what we have is good enough.’ And I will say, our facilities provide what they need to on a day-to-day basis for athletes.”

Although some of the facilities would fall under the category of “adequate,” it was obvious some changes needed to be made in order to remain competitive.

“When you travel around, you start seeing the investments other schools have made. You see things maybe from the viewpoint of what a recruit or a potential coach might see when they’re coming on your campus.”

Asked how he went about prioritizing projects when he arrived in Gainesville, Stricklin says that although some plans had already been forming in the department, he did make some adjustments.

“There was kind of a roadmap of what should be next, which was a standalone football complex, renovations to baseball and renovations to softball. So, I kind of spent my first year studying those three projects and we kind of shifted gears a little bit.

“We did renovate softball, but instead of renovating baseball in the current site, we decided that site, which is adjacent to our football practice fields, will be ideal for a new football standalone building. To build there, you obviously have to do something with baseball.”

The new $65 million baseball stadium, designed by Populous and Walker Architects, is being built on land on the southwest part of campus that formerly housed a citrus grove. The athletic department worked with the university to relocate the citrus grove, including contributing funds to the relocation. The new stadium is adjacent to softball, lacrosse and soccer, creating a new athletic district on that part of campus.

Stricklin, who began his career as a baseball sports information director, is excited about everything the new baseball stadium will have to offer.

“Well, when you talk about Minor League ballparks, that’s what this one feels like. The new Florida ballpark has seats that come right down to the field and really kind of hug the field. There’s not a ton of foul territory, so the fans are really close to the action and it has the open concourse concept where as soon as you walk in the stadium you’re on the concourse and you can see the whole field. You never lose contact with the field as you go up to concessions or check out the restrooms. It has a second deck that has a club level and the press area and a couple of sky boxes and a lot of berms and space down the lines beyond the grandstand.”

Stricklin added that 95% of the seats in the ballpark will be in the shade for afternoon games.

“I think that’s totally going to change the mindset of people wanting to come out and support the Gators,” says Stricklin. “And I I think it’s going to make a huge impact on the attendance and support our team gets.”

The new big project in Gainesville is the new football facility, which is being designed by architecture firm HOK and expected to break ground after the completion of the baseball stadium in the summer of 2020.

“It’s going to be magnificent,” says Stricklin. “It’s going to have everything from a functional standpoint that you need for a football program – the locker room, the training room, the weight room, and equipment room.

“We are building it adjacent to the current practice fields and indoor facility. So, the new weight room is actually going to have a huge glass wall that connects to the existing indoor field, which is only three or four years old now. The weight room is going to be really big, but then it’s going to look and feel even bigger because it’s connected to a 120-yard indoor field. Then the training room looks right out over the practice field. And again, the adjacency, it makes sense if you have an injury. A player can come right into the training room.”

Stricklin says one of the unique features about the facility will be its use beyond football.

“I’ve got to give [football head coach] Dan Mullen a lot of credit for this–really it’s part of the culture here at Florida and understanding that we have 21 sports and they’re all highly successful,” says Stricklin.

“The back 75% of this facility is all going to be football, but the front 25% is going to be a dining hall for all 500-plus student athletes and a rec space, both indoor and outdoor for all of our sports. And I think that’s unique that a football coach would understand that I’m going to have a place in the back, where my players can develop and be as good as they can be. But when they’re on their own with free time or eating dinner, I want them – because at Florida we have Olympic medalists who are currently in school here and we have national champion gymnasts and other sports – I want my football players around highly successful athletes in other sports because I think that’s going to make them better. The iron sharpens iron kind of kind of philosophy.”

Asked about the role head coaches play in the design of a new facility or renovation, Stricklin says it depends on the coach.

“I’ll go back to the ballpark and contrast it to the football training center. Kevin O’Sullivan is our highly successful baseball coach. He had a couple things that were important to him. We had a member of his staff, Buddy Munroe, who’s his operations guy, who was much more involved in the conversations about the team spaces and how that connected to the coaches offices and the workflow of all that and the efficiency of the space. We asked him questions about bullpen location and depth of the dugouts, but they were much more hands-off than say Coach Dan Mullen has been on the football training center.”

“Dan has such a good eye for these things,” Stricklin continues. “And, when you say a coach is involved, I think people immediately think, well they’re involved because they’re asking for a bunch of stuff. It’s not that. They understand budgets. They understand limitations. But they also say, if we’re going to spend this money, you know, let’s make sure that we have the players’ locker room in close proximity to the training room and the equipment room.

“There are some adjacencies that make sense, and a coach can really give that perspective in a way that someone else who’s an architect, or someone’s who administrator, may not.”

It’s not just the head coaches who give input on new facilities.

“We’re doing a dining hall in this new football facility. So our nutritionist had been really involved in how that lays out and what that means for athletes. If we don’t ask the input of the people who are going to use the facility, it limits your ability to build something that’s going to be there for a long time to service a lot of people.”

So, what’s next for the Gators after the new baseball stadium and football facility?

“We’re always looking ahead. We finish up baseball this summer. We start on the new football building immediately after that in the summer here of 2020, and then football will take about 18 months. We’ll start thinking about what comes after that,” says Stricklin.

“Eventually, we want to do some significant work here in The Swamp – Ben Hill Griffin Stadium. It’s an iconic venue. I think it takes a unique approach because it’s got a great vibe to it once it’s packed. But, it’s also kind of designed for a 1970s kind of crowd. You know, the seats are really tight, there’s not a lot of leg room. So, how can you go in and make a little more comfortable without losing what makes it special and maybe add some new premium areas and some other fan amenities?”

Before the Gators tackle the football stadium, however, there are some more immediate needs in Stricklin’s mind.

“A little more immediate is we need to build a clubhouse for our soccer team. They’re kind of the only sport that that doesn’t have a great locker room set up the way they’re currently positioned,” says Stricklin. “Eventually, we want to add more shade covering at some of our outdoor venues such as soccer, lacrosse and our tennis venue. A lot of ways to just kind of make it more fan friendly.”

Stricklin said there’s always something you want to do as an athletic director with your facilities, so fans can expect to see the Gators continuing to reinvest in their infrastructure under his watch.