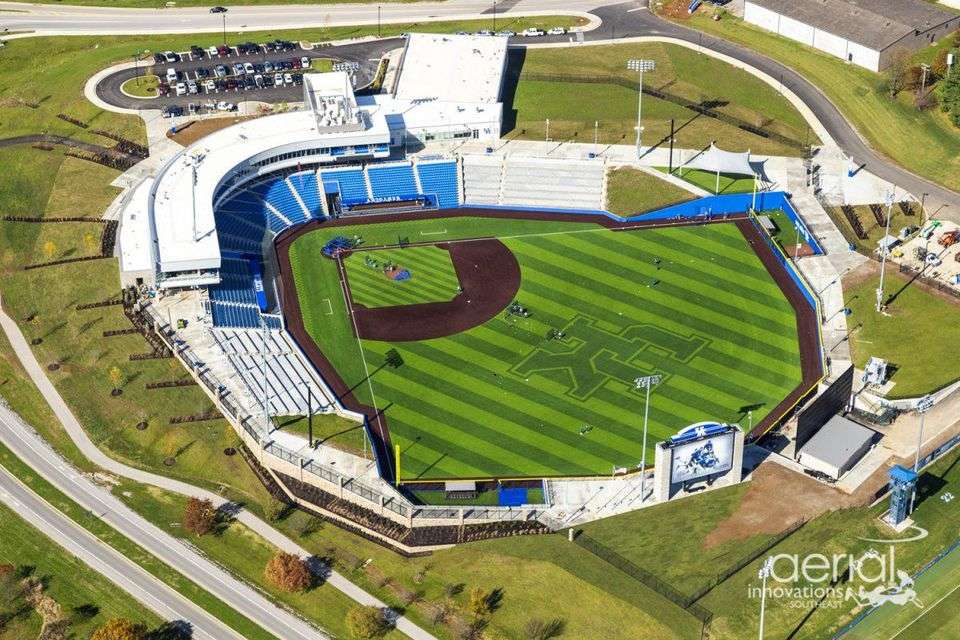 University of Kentucky moved into its new home, Kentucky Proud Park, this week after 50 seasons in Cliff Hagan Stadium. The $49 million stadium seats nearly 2,500 fans and can accommodate 5,000 fans with additional space on grass berms. Temporary bleachers can be installed beyond the outfield wall to expand capacity to 7,000 for NCAA tournament games.

By comparison, the previous stadium had just 500 seats when former 25-year coach Keith Madison took the helm in 1978, which he was able to help grow to 2,000 chairback seats. Madison was instrumental in early fundraising for a new stadium and helped throw out the ceremonial first pitch in the new stadium.

Amenities for fans in the new ballpark include suites and a club area. The video board is the eighth-largest in college baseball at 48 feet wide by 30 feet tall.

The name of the new ballpark, Kentucky Proud Park, is a tribute to farmers and businesses of the Commonwealth of Kentucky and Big Blue Nation.

“Farmers and their families are deeply woven into the culture and heritage of our state,” Athletics Director Mitch Barnhart said. “As the Commonwealth’s flagship university, we are thrilled to honor that through the name of our new baseball stadium and pleased to have a partner in Kentucky Farm Bureau that feels the same way. We look forward to many, many wins in Kentucky Proud Park.”

Officially, Kentucky Farm Bureau secured the rights to name the park but chose to name it for Kentucky Proud, the state’s official agricultural marketing program. However, no taxpayer dollars were used to purchase the naming rights.

“The Kentucky Department of Agriculture appreciates the opportunity to stamp the Kentucky Proud brand as a fixture in this magnificent new facility,” Agriculture Commissioner Ryan Quarles said. “On behalf of our more than 7,000 Kentucky Proud members, I would like to express my gratitude to Kentucky Farm Bureau for sponsoring the Kentucky Proud Park name. This will enable us to raise awareness across Big Blue Nation that Kentucky Proud is the brand for fresh, local products for every Kentucky family.”

This piece originally appeared on Forbes.com on February 27, 2019

Why I’m Impressed After Touring The Athletics Facilities At The University Of Arkansas
Can Louisville Recoup Naming Rights Settlement With A New Deal?